« Movie Review: Knowing (2009) Destiny In a Handbasket | Main | In My Defense: Popcorn Movies Are Good » 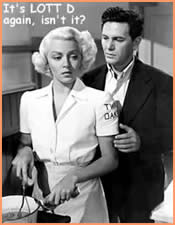 Beware! The archives have been unburied, and the hideous horrors released! For your entertainment and edification pleasure, of course. Members of the League of Tana Tea Drinkers dig deep to find their past misdeeds...and reveal them to you!

Blogue Macabre provides a timely public service announcement to help you prepare for the next zombie holocaust. So pay attention.

Mad Mad Mad Mad Movies gives 2.5 thumbs up for demon-antics in Amityville II: The Possession. It's the .5 thumb that bothers me, though.

Unspeakable Horror takes note of the queer WTF happenstance of the appearance of the Dogman in Kubrick's The Shining. Woof!

Zombos Closet of Horror explores the odd war-time fairytale of Bela Lugosi's declining star in The Return of the Vampire.

And Now the Screaming Starts hops in the saddle as Jesse James Meets Frankenstein's Daughter, and squares it all away with a nice little overview of director William "One Shot" Beaudine's career. He isn't called one shot for nothing!

Dinner With Max Jenke reveals their dream version of Rob Zombie's Halloween 2. (Though it reads more like an hallucination, really.)