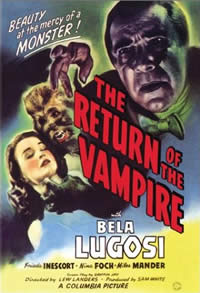 Bela Lugosi's career didn't fare well after his initial fame withDracula. Having apparently failed the makeup screen test forFrankenstein—though he wasn't overly found of playing the monster anyway—his reserved and aloof demeanor kept him from ingratiating himself with the Hollywood in-crowd. That, and the rapidly rising stardom of Boris Karloff after his noted portrayal of the Frankenstein Monster, put Lugosi in a deteriorating career position.

Although he created intensely unique and effective characters such as Dracula, Murder Legendre in White Zombie, and Ygor in Son of Frankenstein, he spent much of his time acting in lesser roles. After Dracula, he portrayed a "real" vampire onscreen only two more times; as Armand Tesla in The Return of the Vampire, and as the more comedic count in Abbott and Costello Meet Frankenstein.

Lew Landers' The Return of the Vampire plays like a Brothers Grimm fairytale. You have your evil villain, the occultist turned vampire, Armand Tesla (Bela Lugosi), his reluctant servant who is tragically caught between good and evil and lycanthropy, and a wartime beleaguered, bomb-ruined London as backdrop seething with revenge creeping in the foggy night.

The story begins as the first World War ends. Lady Jane (Frieda Inescot) and Dr. Saunders (Gilbert Emery) must come to terms with a vampire in their midst. After he attacks a child, Dr. Saunders convinces Lady Jane that their problem goes beyond scientific understanding, and the two set out to find the blood-sucking fiend. But not before Dr. Saunders reads up on the annoying supernatural pests, written by one Armand Tesla, noted authority in the field.

It is an ironic, somewhat foreboding comment Dr. Saunders makes regarding the limitations of science to convince Lady Jane of the existence of something not analyzable under her microscope; only a few years later, the inexplicable horrors of the supernatural world will be supplanted by the inexplicable mutant horrors wrought by science and radiation. After World War II and the atomic bomb, vampires and werewolves would appear less frightening compared to the threats from giant ants, giant spiders, and giant blobs.

As night approaches, Lady Jane and Dr. Saunders find Tesla in his coffin and drive a steel spike into his heart, freeing Andreas (Matt Willis), Tesla's werewolf servant, from his evil grasp, and ending Tesla's reign of terror. Years later, in the aftermath of a World War II Nazi bombing raid, civil defense workers mistakenly remove the spike from Tesla's heart, freeing him to seek vengeance on the family that stopped his vampiric-evil many years before. The scene is reminiscent of a similar scene inFrankenstein Meets the Wolf Man, when Larry Talbot is freed from his tomb by two similarly bumbling, but not very civil-minded, grave robbers.

Andreas, whom the good Lady Jane took in as her laboratory assistant, once again succumbs to Tesla's evil mind control and turns back into his rather huggable werewolf form, gleefully killing people in order to help Tesla assume a new identity and execute his nefarious plan of vengeance against Lady Jane and her loved ones. Andreas' hirsute persona is more Jekyll and Hyde than a straightforward, rip-out-your-throat, bay at the full-moon, kind of werewolf. He's fully conscious of what he's doing, but simply loves killing people and being downright nasty when under Tesla's control.

Against the backdrop of bombed-out London—the aftermath of real horror brought about by the "Jerries"—Andreas and his undead master walk quietly amid the ruins unnoticed, anachronistic folkloric monsters in a tableau of a larger monstrosity, the death and destruction of war. It is an eerie composition; dark spookshow theatrics of cemeteries and fog mingling with scenes of carnage and black-out curtains.

The film moves well and Lugosi, while older, still plays the vampire with a sufficient touch of malice. The addition of his werewolf servant is an odd touch, especially since his servant doesn't act like a werewolf—he talks a lot and wears a suit—but it does provide a unique aspect to the storyline and the need for redemption as Andreas fights for his salvation at the end. Why he becomes a werewolf when Tesla takes control of him is not explained, but Andreas retains his tie and voice whether he's hairy or clean-shaven, which is either sublimely ridiculous or deeply meaningful.

I vote for the former as it's more fun to watch than try to explain.

After Dr. Saunders dies in a plane crash, his manuscript, detailing the exploit with Armand Tesla many years before, falls into the hands of Sir Frederick Fleet of Scotland Yard (Miles Mander). Lady Jane is warned she may be implicated in a murder if Tesla's body is found, but Lady Jane takes up the good fight as she tries to convince Sir Fleet that body is still above ground and a vampire is prowling London. In true stiff upper lip fashion, she pouts in calm determination as Sir Fleet tish-toshes the notion politely, but both still work together to stop Tesla for good. As a woman of science and reason, Lady Jane's strong-willed professionalism foreshadows the career women that will soon grace many a sci-fi horror film in the decade to follow.

The Return of the Vampire is a good B-Movie that got lost in the transition from the Gothic-horror cycle to the scientifically-induced horrors of the 1950s. By 1944, Lugosi, the talking movie screen's first great monster star, exchanged his opera cape for a lab coat in Voodoo Man, and again in 1945 in Zombies on Broadway, playing a mad scientist. In the emerging world of science gone amoral, mad science became all the rage.

For poor Bela, his return was short-lived. He got lost in the transition also.