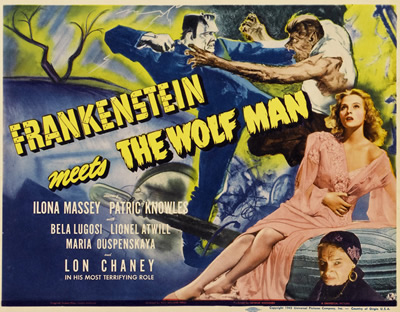 Haven't we tried before to get rid of the Monster by force? We burned down the sanitarium and yet we didn't destroy Frankenstein's fiendish creation. We must be more clever this time. Let's use our brains for once. (Mayor of Vesaria in Frankenstein Meets the Wolf Man)

Frankenstein's creation has changed; both spiritually and physically, he behaves differently from when he first reaches upward toward the sunlight streaming in from the skylight his creator, Henry Frankenstein, briefly opens in Frankenstein. But was the Monster simply reacting to the light or reaching toward understanding it? And was Henry's abrupt closing of the skylight a sign of his reluctance to foster that understanding, to renege on his new role of being a parent?

These are questions no longer asked in The Ghost of Frankenstein, and they are expediently ignored in Frankenstein Meets the Wolf Man. By removing God and Henry's fatherly responsibilities from the equation summing Monster and soul, and by removing the mysterious cosmic spark of life present in the lightning, Universal's script writers could churn out simpler stories of mayhem, brain-swapping, and spook show dramatics unencumbered by philosophical and social musings. Like the Monster's soul, the spirit of the series had fled, to be replaced by rote movements deprived of deeper motivations, slickly paced on Universal's production treadmill so as not to even break a sweat.

But if you look closely at this treadmill you will see a glimmer of something new. Accidentally born out of necessity, perhaps, but still important to take note of. It's the beginning of what would become the essence of the 1950s sci-horror cycle, when science anomaly, outer space threat, and the well-intentioned but catastrophic effects of laboratory discoveries all move to the forefront of our fears, replacing the Gothic darkness and musty passageways of folklore. It is the cross of faith giving way to belief in the crucible of technology. Holy vestments previously used as defense against evil are replaced by the white lab coat and practical instruments used for experimentation, analysis, and resolution.

It’s a malady of the bloodstream—science will cure it.

It’s a botched surgical operation—proper medical procedure and simple electricity will correct it.

It’s a mental disorder—a pressure on the brain that psychological intervention and medical skill will provide palliation for it.

Wielding this newfound confidence and superiority of scientific method over any natural or unnatural adversity is the self-assured scientist. He (and rarely, she) assumes the high status once held by the priest, to sermonize a new religion more palatable for the atomic age about to flourish; and more reassuring in the face of its abuse in an age of global conflict.

Blame it on a) the spiritual disenfranchisement brought on by the conflict of a second World War, or b) a society becoming more distrustful and less naive, or c) a loss of faith in God's handiwork because of both a and b.

Regardless of the reasons, the once frightening monsters of horror were becoming more understandable, more rational in cause and effect and, therefore, less threatening, rendering them weaker in their abilities to terrorize. To compensate for this power drain, Universal mustered the monster rally: if one monster isn't scary enough, two or more will do the trick!

In Frankenstein Meets the Wolf Man, the self-assured scientist's role is played by Dr. Frank Mannering (Patrick Knowles), and the precise point at which out with the old and in with the new takes place occurs when Larry Talbot (Lon Chaney Jr) wakes up in Queen's Hospital in Cardiff, after surgery to repair the head injury incurred from the bludgeoning his father, Sir John Talbot, delivered in The Wolf Man.

Before this, the rebirth of Larry Talbot's cursed existence in Llanwelly Cemetery, under a full moon, contradicts an older age of superstition, when the precious metal silver could end a werewolf curse with certainty, and bring peaceful death to its tormented victim. But not now and no longer, even here in this horror staple of windswept tombstones, moldy earth, and decaying corpses. The curse is not ended and Talbot is not killed by the pounding his feral noggin received with the silver-headed cane. To the dismay of the grave robbers who dared open his tomb, and the awakening Larry Talbot, the creeping moonlight revives the Wolf Man to hunt the streets and woodlands once again.

Once Roy William Neal (The Scarlet Claw) directs the moonlight to creep across the floor in Talbot's tomb and then again in his room in Queen's Hospital, Jack Pierce's man to wolf transformation begins. Talbot explains he's cursed, but the doctor believes him to be delusional. Biting through his straitjacket during a moonlit night, Talbot hoofs it to Maleva the old Gypsy woman for help. But Maleva (Maria Ouspenskaya) is of the old world and therefore powerless in this new age of medicine and science Talbot has awakened in. She tells him only Doctor Frankenstein may possess the knowledge to help and soon they are off to Vasaria to find the doctor.

What happened to the charm she gave him in The Wolf Man, to keep him from turning into a wolf? Why doesn’t she make another one?

Although Ludwig Frankenstein supplied the surgical skill in the previous Ghost of Frankenstein, his manor house and laboratory were destroyed by fire. The watchtower and laboratory shown here are similar to the ones Henry Frankenstein used in Frankenstein. Go figure. At least one quality, the ever ready torch-bearing mob (where DO they get those torches?), does change: the villagers carry lanterns instead. Not as exciting as burning clubs held aloft, but definitely more economical and manageable on set.

Or is it the watchtower?

Talbot, who always manages to dress the part of the Wolf Man (same neat dark shirt, same neat dark (and pressed) slacks), after being chased into the ruins regains consciousness in his human form after falling into a catacomb filled with ice, frost, and burned timbers—a poetically eerie scene that exemplifies the Universal Horror mystique. He frees the Monster (Important! Don't forget Ygor's brain was transplanted into the Monster's cranium at the end of Ghost of Frankenstein), and the two of them chat up a storm over a brisk fire. Ygor, now in the Monster's body, tells Talbot about his tribulations in trying to reach his goal of ruling the world.

Wait. That’s wrong. That’s not what happened in the movie.

The Monster's lengthy speech, which explains the odd mannerism Lugosi had of holding his arms stiffly in front of him as he stumbles around because of near blindness due to blood type incompatibility (it happened at the end of The Ghost of Frankenstein), was cut.

In fact, all of Lugosi's speaking parts were cut. They were removed because preview audiences giggled at the Monster speaking in Lugosi's heavily-accented voice. At least this is the reason often cited by movie historians, repeating the explanation given by Frankenstein Meets the Wolf Man's scriptwriter Curt Siodmak.

But is it entirely true?

The important continuity support needed to make sure the audience remembered the Monster was now Ygor, whose brain was plopped into the Monster’s cranium in Ghost of Frankenstein, no longer existed. There was no chance Lugosi would give a convincing performance because Siodmak's dialog, and Neal's efficient but standard direction of the Monster's talking scenes, highlights the Monster speaking, not Ygor as the Monster speaking. Without this understanding, Ygor’s voice, spoken by the Monster, appears incongruous.

One effective continuity builder Siodmak and Neal could have used would have been a flashback showing Ghost of Frankenstein's climax to reestablish Ygor's presence in the Monster's body. Dialog exchanges between Talbot and the Monster could also have been written with more regard for Lugosi's unique speech patterns (less dialog for him), and more carefully chosen words when he did speak. Talbot also shouldn't be calling the Monster “dumb” as he does in the original script, and the Monster begging for help is out of character even for Ygor.

While it’s easy to assay Lugosi's role as inadequate, he received little help from the script and the subsequent revisions to the movie to be successful.

After the Journal of Life and Death (or How I Did It if you're a Young Frankenstein fan) is found with Baroness Frankenstein's (Ilona Massey) help, Dr. Mannering, who's been tracking Talbot all over Europe, discovers that changing the plus and minus poles on Frankenstein's equipment can either strengthen or deplete electrical energy. Mannering, falling under the Frankenstein curse of hubris (or perhaps simple curiosity), decides to power up the Monster while draining the life out of Talbot to end his werewolf curse.

Oddly, Mannering decides to do this during a full moon.

Cue the slugfest between a rejuvenated Monster/Ygor and the Wolf Man and the destruction—again—of the laboratory. No mention is made of Maleva’s whereabouts after everything blows up, but being Old World anyway, she’s no longer needed to prop up the supernatural aspects of the franchise since they were no longer needed. (Her unexplained absence later in the film was due to an on set injury. I guess they thought no one would notice.)

, Frankenstein Meets the Wolf Man remains an energetic and enjoyable excursion to Universal's quintessentially obscure world of mad science and monsters. And we even get to see Dwight Frye one last time.

Both the Wolf Man and the Monster wind up frozen in ice under the flooded ruins of Castle Frankenstein, waiting to be freed in House of Frankenstein. Like the Monster, the ubiquitous laboratory equipment is just as immortal, and those neck bolts beckon for yet another round of mad science.

Time for the mad scientist to make a house call.