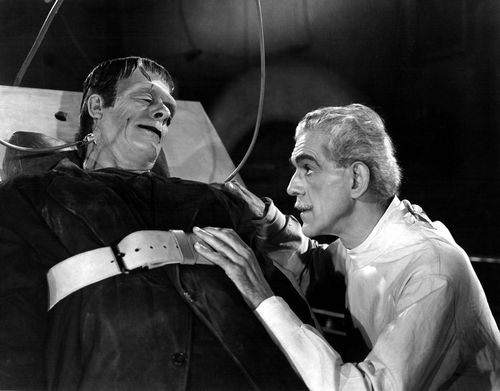 Despite its all star cast, and the return of Boris Karloff to the fold, the movie was the silliest and dullest of the entire series. In its non-stop and methodical rushing through stock horror sequences, it approached the standardization of the "B" Western, and even lacked the kind of bravura dialogue that at least can provide a pseudo-Gothic veneer. (William K. Everson, Classics of the Horror Movie)

Although Everson pans House of Frankenstein, this second monster rally from Universal's production treadmill is not silly or dull, and steps lively through its "stock horror sequences" of brain-swapping mad science, murderous hunchbacked assistants, and star-crossed lovers, all with a patina of Gothic-noir finesse. It's slick-slacks, neatly pressed and sharply creased, and while it does not dwell deep in meaning, House of Frankenstein remains a well-directed, entertainingly acted, and visually appealing Universal-style horror movie.

But John Carradine's portrayal of Dracula is another matter.

Except for his glowing, mesmerizing, ring providing most of the vampire's menace—it offers a glimpse of evil shadows moving furtively in a nightmare world—Carradine's Big Bandleader accoutrement and eye-pop stare brimming from under a silly, tilted tophat and short opera cape dandily draped across his shoulders, do their best to murderlize the spookshow tone entirely. At least Dracula's early demise in the movie lessens our burden of having to suffer Caradine's ham and corn buffet for long, and frees Larry Talbot (Lon Chaney Jr) to pine away and lament his lycanthropic curse, which is really the main storyline anyway.

Maleva the gypsy is no where to be found; and the Frankenstein brothers, daughters, and baronesses are gone, too. The Monster (Glenn Strange) remains; more lifeless than ever in body and spirit, but still recognizable dressed in those defining neck bolts. Erle C. Kenton's patent leather direction, Hans J. Salter's mood-rich music (along with Paul Dessau), and the creative best from the art and set decoration B movie crews with what's at hand all funnel through a lean filming schedule and penny-pinching budget to stir shadow, menace, and monsters briskly when the lightning strikes again.

Imprisoned mad Doctor Gustav Niemann (Boris Karloff) escapes the dark, dank prison cell he's in, along with the homicidal Daniel (J. Carrol Naish), a hunchback outcast dreaming of a straight and handsome body. Niemann's incessant raving about brain transplants, swapping human brains with dog brains, and getting even on those who locked him up appeals to Daniel, who buys into the bad doctor’s promise to give him a better body.

Daniel follows the Doctor when a lightning bolt blasts open an escape route for them through their dark prison’s massive stone walls, hoping Niemann will place his brain into that better body. As the rain pours down, they chance upon Lampini's (George Zucco) traveling sideshow of horrors. Lampini's reluctance to take them where they want to go ends abruptly between Daniel's tightly gripping hands, shown through a flash of sudden terror in Lampini's eyes, Daniel lurching menacingly closer with those outstretched hands, and a gurgling cry as Niemann smirks in quiet satisfaction.

With plans for revenge on those who imprisoned him, and a driving desire to find the life and death secrets of Frankenstein, Niemann assumes Lampini's name and travels to Visaria ( or freel free to insert your own village name here since continuity went out the door with Lampini's body).

Bela Lugosi was originally slated to play the role of Dracula, but the movie’s shooting schedule was dependent on the presence of Boris Karloff being released from the stage tour of Arsenic and Old Lace (1944). Shooting was delayed, and John Carradine was cast instead of Lugosi, who had a prior engagement: ironically, playing Karloff's "Jonathan Brewster" role in another touring company of Arsenic and Old Lace (IMDb entry on House of Frakenstein).

In the mold of Bride of Frankenstein's Pretorius, Niemann is a maniacal scientist bent on one-upping Frankenstein. Brain-swapping becomes modus-operandi, raison d'être, and bargaining chip for Niemann as he pursues his revenge, first on Burgomeister Hussman (Sig Ruman), with the help of Count Dracula.

Early drafts of the story reportedly involved more characters from the Universal Stable, including the Mummy, The Mad Ghoul, and possibly The Invisible Man (Wikipedia), but the only monster to remain in Lampini's traveling horror show is Dracula. Curiously, he is not the vampire late of Whitby Abbey, or even the vampire last seen burning to ashes in Dracula's Daughter. No continuity from there to here is intended.

The skeletal remains of Dracula, with a stake embedded deep into its ribcage, is pure spookshow dramatics parlayed into a rapidly unfolding and stylish vignette of terror for Hussman, kicking off Niemann's revenge with a flourish. It begins with the piecemeal reconstitution of Dracula's body and clothes when Niemann pulls out the stake in a huff after meeting the Burgomeister. With his threat of the dreaded stake poised to strike again, and his promise of fealty to the Lord of the Undead, Niemann convinces Dracula to help him.

In quick succession, Dracula ingratiates himself to Hussman, seduces and hypnotizes Hussman's Americanized (meaning perky and hip) granddaughter-in-law Rita (the effervescent Anne Gwynne), turns into a large bat to kill Hussman (done with a nifty animated transformation capped by a neck attack shown in silhoette), and is discovered by Hussman's son Karl (Peter Coe) who realizes what's happening and sounds the alarm to Inspector Arnz (Lionel Atwill).

With the inspector and his men in hot pursuit on horseback, Dracula, in turn, chases after Niemann and Daniel as they race away with his coffin in Lampini's wagon. With the sunrise moments away, Niemann directs Daniel to dump it. Unable to reach his daytime santuary in time, Dracula is reduced to a skeleton once again. His hypnotic influence over Rita ends when his ring falls off his boney finger.

Economically directed and succinct in execution, it's still exhilarating and entertaining with flair, and certainly not the script calamity it's purported to be in many critical analyses. Carradine projects a more energetic Dracula when he's not staring with widened eyes or donning his tophat, but he doesn't have Lugosi's seductive and menacing silent presence, or malevolence when in motion, which, arguably, could be considered a hindrance to the faster pace of action here.

Continuing to Visaria, they rest at a Gypsy campsite, where Daniel comes to the aid of a girl being whipped. He insists they shelter her and Niemann reluctantly agrees. Daniel's infatuation with the playful Ilonka (Elena Verdugo) is not returned when she sees his hunchback, making him more impatient to receive the new body promised to him by Niemann.

And the one he wants is already occupied by Larry Talbot.

Obviously none of the Universal Frankenstein films ever topped the first two, but I fully agree that "House" was an honest, well done effort, especially coming at a time when the enthusiasm for the first wave of Universal monsters was fading (within a few years they'd primarily be playing straight men for Abbott and Costello's routines).