Books For Horror Movie Bloggers
(And Movie Loving Fans, Too!) 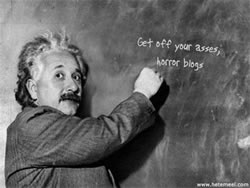 Right off the bat I can tell you the one thing you don't want to get that horror movie blogger on your holiday shopping list: movies. Yes, that's what I said. Movies.

Sure, they seem like they would go together like bread and butter, Starsky and Hutch, and vampires and romance, but let's face it, if a horror blogger is worth his or her salt, movies are already piled high all around within easy viewing reach. The last thing any horror movie blogger needs is another movie to add to the pile!

So how about giving that special someone--otherwise known as always difficult to get gifts for--something really useful: something they will really appreciate and actually use to hone their skills; something that will even benefit their readers: books on movies.

And not just horror movies, mind you, but books on all-around movies. Books to broaden knowledge of the cinema, its history, its craft, and its always present commercial side, which impinges on the history and craft sides, sometimes to wondrous result, many times not.

Here's an essential bookshelf's worth of reading and reference any smart horror movie blogger would appreciate having in his or her critique la arsenal before letting the slinging arrows of outrageous commentary fly:

Arguably the most informative and thought-provoking pocket-sized book on appreciating and understanding movies. Buckland easily takes you through concept and theory to explore genres and the mechanics used to construct a movie. His style is instructive, not pedantic, and he provides a wealth of resources for the reader to continue his or her exploration of cinematic themes. It is a perfect introduction to the art of reviewing movies.

Get the Picture?
The Movie Lover's Guide To Watching Films
by Jim Piper

Piper is a tad pompous and, yes, even a bit condescending in his analyses of the cinematics, story themes, and audience types (Hollywood compared to Indies, for instance) involved in the cinema arts, but his expertise and love of movies shines through to provide an excellent primer on what goes into making a movie special. Even when you find yourself disagreeing with his position or cinematic tastes ( I did, at times, especially in his delineation between a movie and a film), his critiques and positions are always well made and provide much to think about.

The Film Encyclopedia:
The Complete Guide to Film and the Film Industry
by Ephraim Katz, revised by Ronald Dean Nolan

This is a phone book-sized reference providing key information on actors, directors, terminology, history, studios, and much more. I picked up the 6th edition. You will need both hands to pick it up. Some argue the book's latest edition is not as up to date as it could be. I still like it because it contains information on Christopher Lee, Bela Lugosi, Lon Chaney (and Jr.), and Bugs Bunny: The original sketch for the character was submitted by a Warners story man named Bugs Hardaway. For the purpose of identification he marked the model sheets "Bugs' Bunny." The name stuck. I bet you didn't know that. I didn't.

The Rough Guide to Horror Movies
by Alan Jones

I reviewed this small soft-cover book back in 2007. Here's what I said:

Briefly beginning with the literary and celluloid origins of horror, Jones introduces his canon of fifty seminal horror films that stimulated the genre to new heights. This is a section to be revisited again and again. While some of his choices may be open to debate, the entries provide much to think about and discuss. This inclusive list provides the budding horrorhead with the movies he or she simply must see.

The remaining chapters include the icons of horror, the global picture of horror films around the world, and a short section devoted to film festivals, conventions, books, magazines, and websites the reader will want to explore to broaden his or her horizons on cinematic horror.

I tend to hate books that insist you must see this or that before you die. I've got enough problems trying to keep my daily hectic, stressed-out life going without adding more pressure to it. But this pocket-sized book is easy to carry around, the perfect stocking stuffer or basket-filler (with a pound or two of coffee and chocolate tossed in), and filled with information (usually a poster shot and one or two pages) on the movies that give the horror genre its film cred. It's laid out by decade, beginning with the 1910s and ending in the 2000s. There is a beautiful shot of Jack Pierce applying the Frankenstein Monster's makeup to Boris Karloff in the introduction, which probably endeared me to the book immediately. The movies mentioned continue up to 2007's The Orphanage.

Another phone book-sized reference. Don't try to pick up this book and The Film Encyclopedia at the same time. You will get a hernia. This is a fun reference book. Aside from the A to Z listing of movie information you will find sections arranged by categories (including "Zombies" and "Hammer: Horror"), an alternate title index, movies listed by cinematographer and composer, and, my favorite section, Kibbles and Series, where you can find the inspirational source for a movie; such as a literary character (like Dracula), a play, or a Disney ride, among others. I have the 2009 edition, but the 2010 is already listed on Amazon.

American Movie Critics:
An Anthology From the Silents Until Now
by Phillip Lopate (editor)

This book is close to 800 pages of critics doing what they do best: criticizing. What makes this such a wonderful reading experience is the depth and breadth of critical exploration. Arranged chiefly in chronological order, you gain a sense of how critical reviewing of films evolved from the silents to the present day, and the approaches critics have taken--their styles--in approving or disapproving a movie, and their arguments for why they feel that way

Other wonderful choices are The Overlook Film Encyclopedia: Horror by Phil Hardy (though it is out of print), and any book written by Roger Ebert and Pauline Kael.