Movie Review: The Last House on the Left (2009)
To What Purpose? 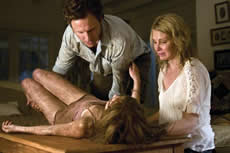 Zombos Says: Good (And to the idiot who walked in at the movie's midway point, sat down in front of me, and proceeded to chat on his cell phone until I had to tell him Miss Manners was looking for him in the lobby, I would have loved to have set that microwave on high with his poppin' head in it.)

This film, for example, which as I write has inspired only one review (by "Fright"), has generated a spirited online discussion about whether you can kill someone by sticking their head in a microwave. Many argue that a microwave won't operate with the door open. Others cite an early scene establishing that the microwave is "broken." The question of whether one should microwave a man's head never arises (from Roger Ebert's review of  The Last House on the Left, 2009).

Of course, whether one should turn on the kitchen garbage disposal to mangle a person's hand into bloody pulp, accompanied with stereophonic screams of agony, could be another philosophical question to ponder in this vicious--yet, oddly, less terrifying--remake of Wes Craven's gut-wrenching 1972 interpretation of Ingmar Bergman's The Virgin Spring. But philosophical ponderance is not often measured into horror movies as much as sadistic inhumanity. So to what purpose do I bathe in blood, along with the innocent and the damned, on this hellish, stormy, night of vengeance? 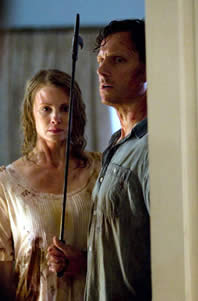 The criminals who eventually rape and attempt to murder Mari (Sarah Paxton) are certainly depraved enough to warrant ill-treatment by her parents. But how far can her parents go before becoming just as depraved as her tormentors, and why do the rest of us choose to watch it all happen? For the suspense? There is none. For the terror? We know what is going to happen so there is no terror. To watch normal people act abnormally when driven beyond the edge of reason? A strong possibility here, especially if those abnormal acts include suffering, redder gore, and darker death; key thematic elements in many horror movies.

At least Ingmar Bergman put God squarely in the middle of his story, forcing guilt and shame on the parents who mete out vengeance to their daughter's killers. You will not find emphasis on a divine presence in this latest incarnation of a story that really did not need to be retold. No guilt or shame, either. There is lots of ungodly loud, screeching music though, like bones dragged across a chalkboard. Unless you are entertained by the  creative ways directors and writers emphasize these thematic elements, there is not much here for you. But if you are, you will especially enjoy the totally gratuitous ending involving a microwave and a deliberately paralyzed sadist. If you've seen Gremlins, you know what to expect.

Leading up to the poppin' head gag, as I like to call it, are the usual characters found mucking about in horror cinema; there is the psycho-witch-bitch girlfriend, Sadie (creepily played by Riki Lindhome), who, I am sure, pulled the arms off of little boys (and girls) while she was growing up; led by the snake-oil-salesman cool, sociopathic boyfriend, Krug (Garret Dillahunt), who easily attracts psycho-witch-bitch type women; followed by the tag-along guy, Francis (weasily played by Fred Podowski) who likes to watch as the other two go medieval-crazy on their victims.There is also the withdrawn, confused son of Krug, Justin (youthfully played by Spencer Treat Clark), who is not all that comfortable associating with the other three. A brief mention of his dead mom makes you wonder how she died.

Setting calamity in motion is Mari's friend Paige (perkily played by Martha MacIsaac), who insists on following Justin back to his motel room to sample his stash of primo weed. Mari, tired of waiting in the car, enters the room and finds Justin and Paige puffing away. Mari gives into Paige's insistence to join them, and starts puffing away, too. This being a horror film, you know Paige and Mari must now suffer and die for smoking weed, even if it is the good stuff. Justin's severely maladjusted family enters the room to fulfill that invariable rule.

Taken into the woods, Mari and Paige are dutifully tormented, Mari is humiliated and raped, and Paige is murdered. While not as emotionally disturbing as Wes Craven originally directed it in 1972, their torment is still brutal and unpleasant to watch. Unable to leave the way they came, Krug, Sadie, Francis, and Justin head through the dark woods to the last house on the left (actually, it looked like it was the only house on that road), where Mr. and Mrs. Collingwood, Mari's parents, put them up for the night. Barely alive, Mari manages to crawl back home and alert her parents to the true natures of their house guests. Much blood-soaked mayhem ensues.

I hope this is the last version of The Virgin Spring we will be tormented with. While the acting, direction, and writing are all very well done, fans of horror have been taken down this road too often already.