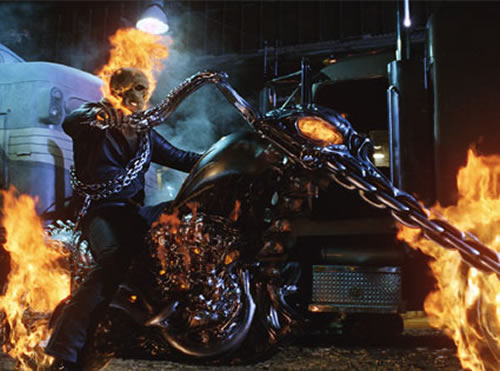 "Why's he staring at you like that?" Lea Persig asked. Her raven-black hair moved softly in the light breeze coming off the water. As our perky garage mechanic, she keeps the numerous vehicles Zombos never rides in tip-top shape. She turned again to look at Zombos sitting on the veranda, sipping his coffee while glaring at us.

"Oh, that's his Penance Stare. He's just sore I went to see Ghost Rider while he had to take Junior to see Bridge to Tilapia, or whatever it's called," I said.

"That's Bridge to Terabithia, you goof," she laughed. She has such a wonderful laugh. "Tilapia's a fish."

"That's the Ghost Rider's main weapon against evil-doers. He forces you to look deep into his empty eye-sockets and soon you feel all the pain and suffering you inflicted on others."

I smiled and waved at Zombos. He glared more intensely, took a sip of coffee, and glared some more. I still didn't feel any pain.

"So what did you think of the movie?" she asked as I handed her another wrench. She was working on the 1960 Harley-Davidson Glide motorcycle to smooth out its ride. "I mean, was it any good?"

"Like what?" She wiped the grease mark from her pale cheek, with a handkerchief she always carried in her back pocket, and took a breather.

"For one thing, the story’s a nice departure from the usual slasher and cannibalistic-serial-killer or psycho-mutants-among-us storylines coming out of Hollywood these days. It's always nice to see a return to the more supernatural underpinnings modern horror grew from. A well done good-versus-evil story can be inspiring."

"Was it inspiring then?" she asked, putting her handkerchief away.

"Well...no. Not very much so. I suppose because the movie lacks sufficient emotional punch."

"Bloody, sell your soul to the devil pacts, an errant son whose evil can plunge the whole world into Hell, and a stunt motorcycle-riding, demon-possessed, flaming-skull, blazing-chain wielding innocent rube named Johnny Blaze, played by Nicolas Cage, who's tricked into playing bounty-hunter to bring back Hell's stragglers to ol’ two-horns himself. But he must play truant officer first."

"And that’s not inspiring to you?" Lea laughed.

"Why are Zombos' eyes bugging out?" Zimba's Uncle Fadrus asked as he walked up the path to us. He enjoyed taking early morning walks before breakfast, especially in the desolate woods surrounding the mansion. "Oh, wait. I seem to recall Zimba forcing him to take Junior to the movies last night. Never mind. What's this about, Ghost Rider?"

"We were discussing how uninspiring it was," I said.

"Yes, it does lack that essential emotional connection that would have made it a better movie. Certainly no lack of budget for the special effects, though. They were fairly good."

"So you’re saying a movie is good if it has good special effects?" asked Lea.

Fadrus shook his head. "No, no. I'm just saying part of what makes a movie good is the way in which special effects are handled, if the script calls for them, of course."

"The opening scenes in the Old West, with Sam Elliott's narration, are good," I said. "Computer-enhanced images embellish the action nicely. Then there's the scene between Johnny Blaze and Peter Fonda’s Faustian Mephistopheles. One bit of visual genius has Meph’s shadow appear as a gnarled, bent-over creature in a flash of lightning—his true self. Another is a drop of blood from Blaze's finger as he signs the devil's pact. It falls to the ground and splatters into a crimson glimpse of souls suffering in Hell. Very artistic use of CGI, especially with faces as the hideous demon appears briefly with more comely features, revealing the evil within."

"The blazing skull and flaming motorcycle are well done, too—uh, no pun intended," smiled Fadrus. "Changing the colors of his cranial flames to reflect the Ghost Rider's mood, blue for sadness, for instance, is a thoughtful touch. And that transformation scene as Blaze becomes the Ghost Rider for the first time, it's painful to watch as red embers sear his flesh from underneath!"

"But in his characterization though, Nicolas Cage's toning down of the original bad-ass comic book character is probably due more to merchandising needs than any artistic expression," I added. "Just look at all those Ghost Rider toys in the stores. You wouldn't be able to sell them with an R-rated Johnny Blaze, would you?"

"So you're saying the movie isn’t very good because it worried more about merchandising toys than it did about telling the story?" asked Lea.

"Yes and no," I replied. "Merchandising toys works for movies like the Fantastic Four because the original characterizations are more family-friendly to begin with. But Ghost Rider was not, originally, a family-friendly kind of character."

Fadrus added, "And Cage's eccentricities for the character like eating jelly-beans from a martini glass and watching skits with monkeys dressed as humans, are too contrived. I mean, really, he's signed a pact with the devil for heaven's sake."

"Probably the strongest weakness in the movie is how the four elemental demon-boys summoned by Blackheart, Mephisto's errant son, are so easily brushed-off by Ghost Rider," I said.

"Yes," Fadrus agreed. "After Blackheart shows up at that Hell's Angel's biker-bar in the middle of nowhere, happily turning everyone to dark muck, and then summoning those nattily-dressed Goth demons to take care of Ghost Rider, not much action happens between him and them. So little screen time is devoted to their battles, and when they do fight it's a simple, unimaginative, knock-out punch that sends them back to oblivion."

Lea laughed. "Any more puns and I'll take a wrench to the two of you."

"What pun? Oh, I see what you mean. Anyway, she's a reporter, but doesn't do much reporting, and when she confronts Johnny Blaze and he explains his hellish predicament, there are no sparks, there is no intensity in the revelation. You’d think a man living on the edge of damnation, well, you would think there'd be more fear, more emotional trepidation."

Fadrus said, "And the dialog didn't help, either. Come to think of it, the dialog was fairly poor throughout the movie. Here you have Lucifer, his crazy son, demons galore, and a quintessential fight between good and evil, and I can't recall any dialog stood out or was inspiring. Even Peter Fonda here—in the movie Race with the Devil he’s more energetic against evil—does little to hype his Lord of Hell role. He's too sedate. There’s no seduction to his evil."

"So…so far, from what the two of you have said, the movie is not that good," said Lea.

"I wouldn't say that. There are some good points to it," I said. "For instance, while it lacks emotional-pull, has no witty dialog, and needs stronger fight scenes, the story is coherent enough, the acting sufficient, and the promise of a sequel provides a second chance for improvement. I think of it more as a work in progress. There’s also something endearing about the Wild West origins to the story, especially in the beginning and at the end. Sam Elliott brings it out and his presence lifts the movie up a notch.

"Don't forget this movie was done by Mark Steven Johnson, who also did Daredevil and Elektra, which were both disappointments. Even directors deserve second chances."

Zombos ran up to us. "I've got Fandango tickets for Ghost Rider, matinee show. Who's with me?" he gasped in between breaths. We all said "I am" at once, and were soon off to see it again.