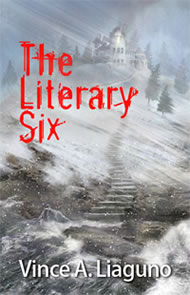 Vince A. Liaguno's The Literary Six is strangers meeting on a (terror) train. Think April Fool's Day meets The Secret History from fiction. And, like all good strangers, once these two get together, there's blood. Think Happy Birthday to Me or My Bloody Valentine or Prom Night or any of the other slasher-by-numbers from the Golden Age of Freddy and Jason and Michael, but don't (though you'll be tempted) try to shove this book into your VCR. Instead just let it play in your head, and with your head, and if you can keep from grinning, then you're a better person than me. As Liaguno shows us with this impressive debut, the slasher is far from dead - it isn't even tired yet. - Stephen Graham Jones, Demon Theory

It was a pleasant surprise for us to find out that Vince Liaguno is a Long Island native. New York State Nursing Home Administrator by day, and devilish writer of horror by night — along with being a contributing editor to Autograph Collector magazine — he joins us to talk about his love for horror and his novel, The Literary Six.

When and how did you get the horror bug?

As a younger child, my access was pretty much limited to TV horror, and some of those creepy 70’s films still stick in my mind — Don’t Be Afraid of the Dark, Gargoyles, Trilogy of Terror, those cheesy AIP films like Count Yorga.

When I was eight, my dad took me to see Jaws and I joke that it took four successive tries before I made it through the whole movie. Each time we’d go, I’d make it a little farther and then be like “Daddy, can we go?” through chattering teeth. Then, when I was ten, my dad took me to see Halloween. That was the defining moment for me. I was hooked on horror, especially the slashers, and couldn’t get enough after that. Horror became like a drug.

Tell us about your novel, The Literary Six, and how it came about. 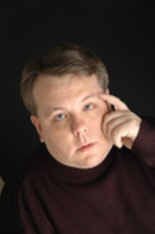 Like I said, I really fell hard for the slasher films of the early eighties. I’m not sure if it was the comfort of the formula that I found appealing or what it was, but these films captivated me. There was something primal about the terror, maybe because the onscreen horror could translate so easily into real-life that made these films frightening.

Around the same time, I discovered horror literature — Jack Ketchum, Richard Laymon, and novelizations of the slasher films. I think I was struck by the differences between the latter and the films they novelized — the books adding nuance and capturing the characterization of the source material better than the films. I knew that someday I wanted to capture a slasher film on the printed page to make the literary equivalent of a slasher film, if you will. Flash forward twenty years or so, and I did.

What's your "secret" for writing? What challenges did you need to overcome to finish this novel?

The only secret that I discovered while writing Lit6 (as it’s been dubbed on Internet boards) is that novels don’t write themselves. I know…mind-blowing stuff, right? Early on, I spent a great deal of time planning and thinking and plotting, which are all important to the process, but I think I prolonged that step long past the point of being productive. Perhaps it was out of an unconscious fear of doing the actual work…that old devil known as procrastination. But once I started and found my groove, I organized the writing process and drew from my Catholic school upbringing to discipline myself — even rapped my own knuckles a few times with a ruler just to keep it real.

I wrote Lit6 for about two hours, 3-4 evenings a week, and 8-10 hours on both Saturday and Sunday. The first draft process lasted about a year, the rewrites and editing another year. In terms of challenges, I think the major challenge was to bring a literary element into a sub-genre of horror not well known for its substance. Slasher films were all about the inventiveness of the kills, the systematic slaughter of a cast of characters. I wanted to remain true to the formula while updating it for more discriminating readers, for the teenage fans of those 80’s b-flicks who had grown up. Character development was critical, and I wanted an element of mystery. I wanted to logically scatter the players across the proverbial chessboard and then keep the audience in suspense as to where the malevolent force in the novel would strike next.

What is Queer Horror, and why is it important?

Queer horror is a burgeoning movement within the horror genre, with an obvious focus on the inclusion of queer characters, situations, and cultural references. In other words, horror that appeals to a gay audience.

Up until recently, many of the homosexual characters in horror have been peripheral to the action. Unless the character was an exotic lesbian vampire right out of The Hunger, you weren’t seeing many gay characters in horror literature or film. I think gay horror fans hungered to see stories inclusive of a more diverse cross-section of society.

There is definitely a market for horror in which GLBT individuals can see themselves represented, and even some venerable publishing houses like Haworth are developing their own GLBT horror imprints. It’s funny because I never set out to write a “queer” horror novel and was actually surprised when the gay elements received a lot of the focus. I really set out to write an integrated novel that would appeal to a broad range of horror fans -- straight and gay alike. The novel is populated by eight or so primary characters, two of which are entangled in a gay/bisexual subplot that figures into the overall action. Most of all, I set out to write a horror novel and hope that it scares people senseless regardless of their sexual orientation.

What horror films are your favorites and why? Which ones turn you off?

Besides slashers, I love ensemble stories. Large casts of well-defined characters that do battle with the evil forces at work. Films like Carpenter’s The Fog and The Thing, Alien, Maximum Overdrive, more recently The Descent. I’m looking forward to the upcoming film adaptation of King’s The Mist, which I think falls firmly into this category.

In terms of turn-offs, I’m not overly fond of the trend toward torture movies. Not opposed to extreme violence onscreen if it’s germane to the story, but when the story exists for the sole purpose of the graphic violence, then I’m turned off. Not a big Hostel aficionado or fan of the Saw sequels.

Also have to admit that I’m a sucker for the occasional remake. I like to see alternate spins on the same source material and then compare and contrast. There does seem to be a preponderance of remakes of late, and while some work brilliantly like The Hills Have Eyes and others fail miserably like The Fog, I find most fall comfortably in between. I’m really looking forward to Rob Zombie’s reimagining of Halloween – more so because I loved his House of 1,000 Corpses and was less enchanted with The Devils Rejects, a film I think falls squarely into the realm of torture films. Say what you will, the guy’s a gutsy filmmaker with an eye for the nasty, so it’s going to be interesting to see what he does with a masterpiece of subtlety and nuance like Carpenter’s classic.

Who are your favorite authors and why?

I think the first author who I ever considered a favorite was Agatha Christie. Like slasher films, her novels followed an established formula that appealed to me. And, face it; the woman was the mistress of well-constructed mysteries! In fact, I’ve always considered her And Then There Were None and its subsequent 1945 film adaptation to be the first true slasher story — ten people brought to an isolated island and killed off systematically in inventive ways at the hands of an unseen killer for the sins of their past...come on!

Jack Ketchum and his legendary Off Season had a profound influence on my writing aspirations. His was the first novel I had ever read that captured the visceral quality of the slasher films I was so enamored with in written form. He taught me that written words had more power than all of the special make-up effects in the world because they had something that could rarely be captured by film — the reader’s own imagination. Peter Straub probably runs a close second in teaching me about nuance and mood — his Shadowland is probably one of the best works of understated horror ever.

Today, I’m loving the stuff by Bentley Little and Scott Nicholson. Both have found comfortable niches and great formulas to craft strong horror fiction that’s the literary equivalent of the most comfy t-shirt in your closet. Christopher Rice is another favorite of mine — great characters in well-plotted, suspenseful mysteries with a decidedly gothic feel. He’s got a great future ahead of him — one would hope with such genes, right?

What are you working on now?

Coming along on my second novel, tentatively titled The Renewed. This will be a departure from Lit6, more in the horror/science fiction vein. While I intend on revisiting the slasher genre somewhere in my career, I didn’t think it a wise move to follow-up with the same type of story. There are worse things than being pigeonholed, I guess, but feel it’s worth trying to avoid this early on. I tend to gauge the mood of my work by genre films, and I’d say that the new novel is a hybrid of Invasion of the Body Snatchers, The Fog, and Village of the Damned…maybe shades of Day of the Triffids thrown in. There will definitely be no butcher knife-wielding maniacs in this one, but the horror will be intense, muses willing. 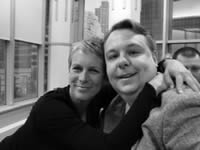 I’m juggling work on the novel with my gig as a contributing editor at a small national magazine — for which I get to interview and write about some of my favorite celebs — and a weekly e-column called Slasher Speak: The Murderous Articulations of Vince Liagunoat the queer horror site, Unspeakable Horror, where I write book and film reviews, commentaries, nostalgic retrospectives on some of the great slasher films, and the occasional ruminations on Jamie Lee Curtis.

I’ve also been trying my hand at some short stories, not a format with which I’m intimately comfortable so I’m pushing myself. I’ve submitted to one or two anthologies, figuring it’s a good way to hone the craft while remaining visible to readers in between novels.

What's the one question you would love to be asked and what's the answer?

Hmm. That would have to be the age-old question that determines the fabric, the very essence of an individual: boxers or briefs?  Boxer briefs, thank you very much.