Look what fell out of the closet. Back when you got cool swag through cereal premiums (either in the box or with a cutout from the box to mail in), this Space Patrol Periscope was a nifty gadget (omg--just 25 cents!) for intrepid earth-bound aliens and humans. Space Patrol was a juvenile-oriented science fiction running from 1950 to 1955 on television, but an adult audience soon followed, making it a popular series. While not even at the unexpurgated Star Wars level of special effects, it was still fun to watch the space drama unfold each week for many. Filmed on the original soundstage that Lon Chaney's silent, Phantom of the Opera, was shot, Space Patrol boasted larger setpieces than other science fiction series like Captain Video and Tom Corbett, Space Cadet (as cited in the Wikipedia article, but the citing website link is no longer active). Due to the limitations of broadcasting at the time, episodes were recorded via kinescope for distribution to distant television stations. I have a fond memory of building a similar periscope to spy on the neighborhood kids, but I wish I had had this one at the time. It's way cooler than the one I built. 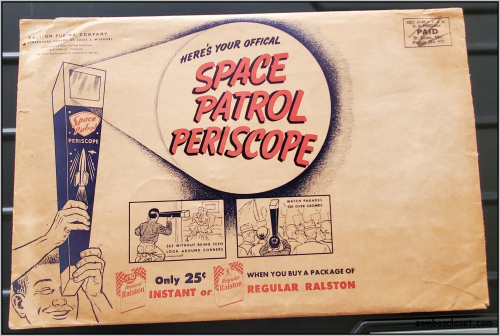 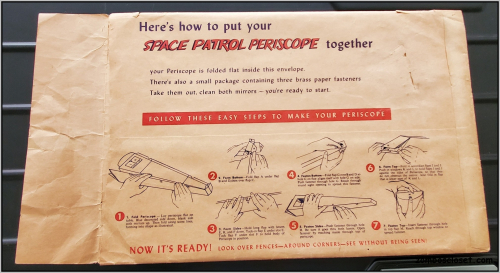 It would be great if those 2D graphics were printed in 3D. That gun looks like the Wham-O Air Blaster.

found these somewhere online i want to print out the guns