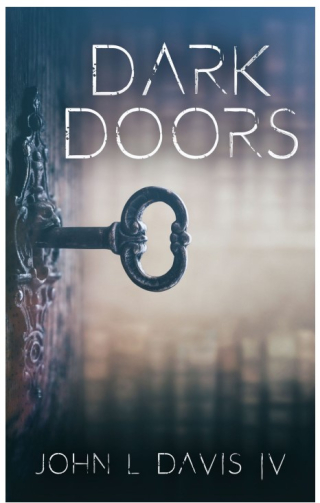 My review for Dark Doors first appeared in The Horror Zine. Please go there to see more reviews by me and other staff book reviewers as well as fiction, poetry, and art by many of today's established and up and coming horror-creatives. This review is reposted with permission.

As a reader, you should know, up front, that all book reviewers are bound by their acquired tastes for those savory stories and novels they naturally gravitate to. Not much of a surprise there, but it is easy to forget that what I, as one of those reviewers, may say or think about a book is not gospel or particularly insightful; but hopefully, at least, entertaining and informative so you can make a fairly good decision, a yay or nay, on reading that author’s work. It is, while prone to dodging the slings and arrows of annoyed authors and their disgruntled fans, an important function of the critical process that most reviewers take seriously.

I mention all this because John L. Davis’s Dark Doors is not my cup of tea. Davis is a gloom and doom, apocalyptic, sky has fallen, kind of author who delves deeply into body horror, dismembered bits, and no-one-gets-out-alive fiction that can be a downer for a reader like myself. Give me a suspenseful ghost story, a building-threat supernatural mystery, or a Lovecraftian monster ensemble anytime and I am aces. It is to his credit that he does it so well, for the most part, in Dark Doors that I have no qualms recommending this collection to you. If you are the type who likes kicking little puppy dogs when no one is looking or happily driving in the rain hoping to plow through large puddles near pedestrians, then Davis’s stories are your cup of tea—with arsenic. And, most likely, they are even your kind of apocalypse served up stark and cold, and to your prepper heart’s liking. Just be careful as he is prone to rip out hearts, organs, and limbs with much gusto through his detailed descriptions. Clearly, he is not a fan of the Hallmark Channel.

His cheerless characters move between just enough sentience for the situation, in stereotypical terms we all know by heart, and more than enough with relatable people you wish were not in the dire situations he puts them in. One such unfortunate but relatable soul is found in Cavity Search, the opener, where an autopsy goes awry and Allen Dirkan, an unpleasant, condescending medical examiner, disliked by everyone, has a sour day. Even though Davis makes Dirkan a real asswipe (we all know someone like him, at some point, right?), you still feel for the poor slub as the body wheeled into his room still has some weird life in it. Reading more like an opening chapter to a novel, the story has no ending, so I would hope Davis returns to writing more about Dirkan and, hopefully, helps him survive—or at least kills him off quickly for mercy’s sake.

Reading through this collection you may notice there is no hero’s journey (well, mostly), no going from bad to good (more like bad to worse), and no self-growth or enlightenment (just you die or are close to dying, usually horribly and without some body parts still connected). His people are stuck in the moments engulfing them and what happens is graphically rendered.

From the Homestead, a short-short where a hopeful couple meet their grisly ending in an idyllic setting, to Mountain Nightmare: A Christmas Tale, when family becomes a nightmare waiting to eat you alive (no Burl Ives singing Silver and Gold in this one), Davis never lets up on the bleakness.

The person you will really feel for is found in The Headman’s Blade, hands down the best story in this collection of nineteen. If you go back far enough in your television viewing habits, you may envision a 1950s black and white western show as you read how a village blacksmith, in meticulous detail, forges an axe for shearing heads. Tobias Reere sweats through the metal hammering and shaping of the blade as a deadline draws to its end. The law is the law in this gloomy apocalyptic tale, but the precision that Davis uses describing the forging of that blade, the hinting at the reasons behind it, and the pacing that builds and builds makes this an exceptional short story regardless of its genre.

The second-best story would be Searching for Stephen King. Another apocalyptic situation as Blanks, formerly known as Anderson Palmer, struggles, along with his companion, to see any given day to its end. In between finding food and fending off monsters, he searches for the book that will complete his Stephen King collection. Blanks likes books. So much so that he fails to realize the piles of them suddenly appearing here and there in his foraging will lead him to danger. Perhaps here one can say a hero’s journey is in the making. While overall a good read, the structure of the story is predictable without a good reason for being so; but the ending, given Davis’s penchant for staring into the abyss-like denouements, is a nice change.

Or perhaps, Fat Jack would be the hero’s journey, although twisted like a knot a la Davis.  A demon intruder butchers his family, sending Jack on a mission of revenge. Losing weight, lifting weights, and searching for the killer consumes him until the tables turn and Jack becomes the predator with no mercy. The simple structure of this story, unspeakable tragedy to single-minded mission to meeting one’s pain head on, moves Jack through changes he never would have imagined. This story has the quirky darkness and gory splash that would make a good half-hour animated horror.

For light-hearted fare, sorry, you will not find it in this collection except for Sunday Morning. Even that is a stretch, but if you include dark humor Davis serves it up as Ty Walder enjoys his day off. Sure, Ty keeps looking at the basement door—he works at home—and suppresses the urge to ruin his peaceful day of rest by doing some odds and ends while he sips his coffee; but he controls his urge until his work catches up with him. As a person who works from home, I can sympathize with him.

”Before, he used to work in various locations, but found it far too stressful. He did the work because it was necessary, but there was little enjoyment in it. Working from home had changed all that. Now, he had to make himself quit at the end of the day, and had instituted the self-imposed mandatory Sundays off, to ensure that he wouldn’t burn out.”

But no matter how hard you work, there is always more to do or to be done to you. Like Fat Jack, this is another short-short that would make a perfect Love Death +Robots animated entry.

Other stories mix it up with zombies, monstrous others, doomed victims, demolished societies, shattered lives, with assorted limb-shredding along the way. Other stories are even more gloomy, doomy, and perhaps not to be read on your peaceful days off or just before bed if you have trouble falling asleep. But for a self-published book (although some stories in this collection were previously published), the typos are few, the writing is good—and sometimes exceptional—and the visceral horror aplenty. So pour a cup, without arsenic, turn on your Kindle, and enjoy.