I Have Asked to Be
Where No Storms Come
by Gwendolyn N. Nix
Book Review 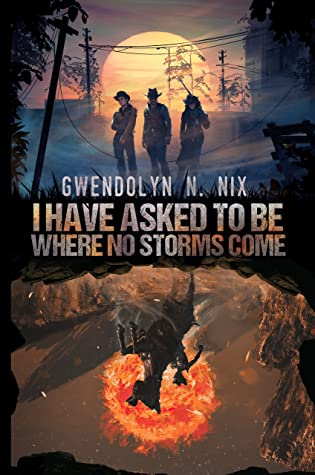 My review for I Have Asked to Be Where No Storms Come first appeared in The Horror Zine. It is reposted here with permission.

Sometimes words can get in the way of what an author and editor believe they are placing on the page. So much so that, by the time the novel is finished, you have a highly creative story that is confusing on first reading for anyone but the author and editor. With muddled elements in its framework of figurative joists, and a world-building nomenclature and landscape not putting out enough cogent information to keep the reader’s head above the tale being spun instead of getting mired, it becomes a challenging and bewildering endeavor.

Such is the case with I Have Asked to Be Where No Storms Come, an ambitious novel that melds dark fantasy, alternative history, and weird western fiction, three rich areas for imagination and drama, into a dense reading filled with flashbacks, here and there and now and then scene changes, and dialog heavy chapters alternating the experiences of two special but cursed brothers. All this is made denser by spiritually glossy words combined into metaphysically heavy sentences, replacing direct descriptions with concept-art word-pieces reaching for deep meanings but less clarity. Too much of a good thing is one way to describe this effort.

The head-scratching begins with trying to pin down the “when” of this narrative. A clue is given with how both Domino and Wicasah, two brothers of the Western Plains, from a family of witches, are, briefly, fossil hunters for hire. That would seem to place the time-period around 1877, a boon time for paleontologists in the old west after discoveries that led to dinosaur quarries producing tons of bones. But that does not sit right with other elements in the story that bounce automobiles in with the wagons, and Domino driving a cool muscle car in Hell. Another bone to pick, aside from time, is how Gwendolyn N. Nix pulls from various mythologies and cultures to weave her alternate world and its realms as if she has lots of interests and, sure, why not add it all into this one story. The result is an everything but the kitchen sink aesthetic that is confusing.

It all opens with Domino in Hell, though it is later called Helia, as he sits pondering a cell phone, mystified by it. No foreshadowing here, it is soon dropped. Helia is finally explained later in the novel, although a little too late in Nix’s fluid 5-part plotting structure. In Greek mythology, Helia is a sun goddess. In Nix’s mythology, it is a place. This makes the explanation for it, which is the driving force of the story, important. Instead of being a carefully placed revelation to generate welcomed acknowledgement that the prime reason for everything happening is now revealed, it produces an oh finally instead. Nix continues to provide essential explanations in this way toward the latter part of the novel, for key plot elements introduced at the beginning, as if she were working them out as she wrote. These explanations come through lengthy dialogs well after readers may be wondering about all the esoterica casually tossed their way.

The many elements that Nix draws on give the effect of being add-ons instead of organic elements growing with the story. Instead of a carefully structured unfolding, they appear again and again like a collage of ideas instead of a careful seeding to build the emotional pull with the people inhabiting her bizarre landscape. This landscape is broken in two by the Dark and Bloody, an eco-apocalypse thematic tied to Helia and all the bad reasons Domino and Wicasah, are fighting to survive.

Much exposition is devoted to family turmoil with and between Domino, Wicasah, their witch relatives, and significant others, taking up a large portion of the novel; there is the other turmoil of demons, dead souls, witches’ blood, and witches and god-like beings playing with thunder and worlds. Both eventually coalesce, but the drawn-out nature of the family turmoil dilutes the other. Both are never fully given a history: only those reasons directly related to the plot. Why does Domino and Wicasah’s father hate their mother and all witches? Where did all the witches come from in the first place and why is it a thing? Where did Domino and Wicasah’s tremendous powers come from and why are they so important to others seeking to entrap them?

With all these elements vying for the reader’s understanding, not enough basic wording is given to flesh them out fully or pace them within their importance. It is here where Nix’s stream of spiritual style dulls the pragmatic needs of the underlying actions. Her descriptions are concept-flights that need be re-read, often, to fully grasp what is going on and why.

Lots happens to the people and creatures in Helia and on earth, but their actions and reactions go by like watching a landscape from a moving train. Why Domino and other dead souls wind up in Helia is wonderfully imaginative. Witches and their hungry familiars (Domino’s familiars like to eat bones and do not mind chewing on his now and then); unhappy demons (because of all the annoying dead humans who like to sniff demon bone dust); psychopomps (from Greek mythology, guides for the dead) like the lady-slippers queen and Anxius; nuckelavees (from Orcadian mythology, a man-horse demon); a determined heyoka wielding lightning and a bad disposition (in Sioux culture, a sacred clown)--all swirl together as Domino battles to save his brother from a dangerous father who hates witches, and as Wicasah battles to save his brother from a dangerous battle between witches and gods and demons and dead souls in Helia.

There is a better novel buried in the archeological dig of this one. If you are one for reading word-tripping esoterica and new age spinning fiction, this novel may be well worth your while. There is also enough going on here that a carefully adapted screenplay could capture for Netflix or another streamer for those of us looking for more straightforward storytelling. It would not be surprising at all if that happened.