One of the essential film noir movies of the 1950s, D.O.A's grim, deterministic, storyline is captured well in this Mexican lobby card. Film buffs will usually point out the opening tracking shot that follows Bigelow (Edmund O'Brien) as he makes his way to the police detectives who already know who he is, but need the background story to connect the dots. The movie kicks in from there and you feel for the guy. For his neglected gal. And for the crazy, one-in-a-million reason he's dying. The dialog's a bit literary at times, but the momentum from the opening to the ending is always on the mark. 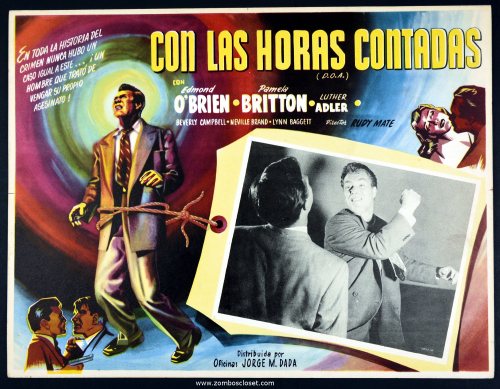 Posted at 09:50 AM in Azteca/Mexican Lobby Cards | Permalink