Movie Review: The Lone Ranger (2013)
No Happy Trails for You Here 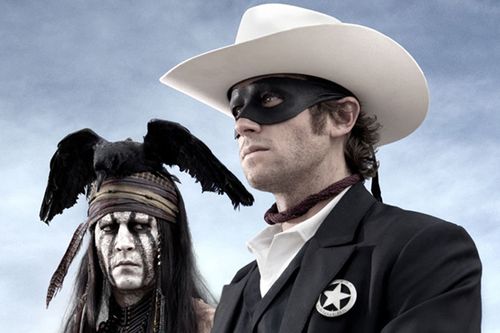 Zombos Says: Where have all the heroes gone?

Finally, there's one glorious moment where the Lone Ranger gallops across the town's rooftops on his white horse, Silver, as the rousing William Tell overture kicks in. One moment. It's exciting, thrilling, and fleeting, except for the loud soundtrack, which continues well past its purpose.

I don't understand Hollywood's creative-mangling; its keenness for techno-virtuosity and loud breakage, and deaf ear for a logically plotted and dramatically characterized narrative to carry it. All these sound and fury moments have become repetitious and only pander to audiences gorged on sugar but who have forgotten what sweet really tastes like. How ironic is it that as the movies get BIGGER, they play smaller.

Two misguided moments have Tonto first taking a shovel to John Reid's head for a cheap chuckle--he's the future Lone Ranger, played by Armie Hammer--and then dragging his head through road apples for another kiddie-quality grin. I'm dumbfounded. I don't know why this script etiquette of writing antagonistic relationships between buddy-characters who actually got along swimmingly in their original incarnations  is now always part of Hollywood's re-imagining process. It undermines the intrinsic nature of why the original series works. The abysmal Wild Wild West remake with Will Smith and Kevin Kline is another sad example of this lazy scripting staple. Note to Hollywood: maybe try finding comedy through the characters and not artificially by dumbing them down with rehashed pratfall situations and trumped up relationships in EVERY movie.

By now you should get a good sense of how much I feel this movie fails its promise. I'll go a step further and even say it stinks. I realize "stinks" is not a Pulitzer Prize worthy word for a reviewer to use, but it best sums up the failure of yet another expensive franchise reboot that deserves better than Gore Verbinski's beautifully directed but gaseous, blockbuster-less, movie.

Its failed ideas include another brothel-madame-with-a-quirky-twist--Helena Bonham Carter doing her standard weird woman role accompanied by an ivory leg holding an amazingly accurate shotgun; then there’s a varmint (William Fichtner) who likes to eat people's hearts raw; then there are his evil but comedic henchmen, a la Pirates of the Caribbean, with feminine dress-up habits and especially grimy appearances; and, of course, there’s Johnny Depp's Tonto providing his patented greasepaint antics like wearing a bird cage on his head, or feeding his dead-bird-hat, or speaking to a horse that likes to sit in trees and transcend gravity at opportune moments when that ability is most needed for the action.

And that action isn't bad, just pointless because it’s devoid of any emotional punch when every character is written as fiberboard instead of oak, and consigned to doing familiar shticks in a strikingly colorless frontier. This story is cynical when it needs to be sincere, and Tonto and the Lone Ranger are caricatures when they need to be heroes. The U.S. Cavalry is present to fire off their Gatling Guns. Native Americans are present to be massacred by those guns. The power-hungry railroad tycoon wannabe (Tom Wilkinson) is here to be overbearingly power-hungry, although Wilkinson does have a knack for such dastardly roles.

Perhaps this movie didn't start out poorly? Perhaps the “memos” mori and apparent overhanding rewrites pounded the original story’s whole grain into mush? When John Reid holds up John Locke’s Two Treatises of Government as his bible you get the sense this young and idealistic, newly minted, attorney is in for a letdown, forcing him to become the legendary masked lawman to realize the justice he seeks. The letdown comes, but it’s buried under a ton of screeching metal and loose storylines that don’t fortify his transformation. When Tonto’s bizarre behavior is explained by a compelling backstory, it comes at a time we can’t appreciate it; it’s lost in the loud bangs and rush to blow things up with lots of dynamite.

And the biggest letdown is for us, the fans of the Western and Cowboy genres. That's Western, as in not the Caribbean.