LOTT-D Visits The Cabin in the Woods
Part 1 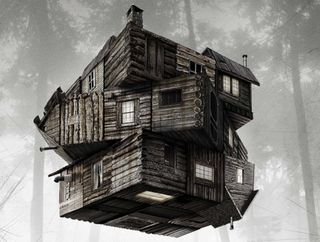 Pack a box lunch and join members of the League of Tana Tea Drinkers as they visit The Cabin in the Woods...

Theofantastique explores the monstrous and the eldritch..."In this post I will supplement some of the commentary previously offered, and present a few observations that are worth considering in light of Whedon’s latest work, and the current state of American horror films."

Freddy in Space has a wet dream..."I'm just gonna come right out and say it.  This movie is way too smart and way too awesome for American theaters and mainstream American audiences.  That's all I could think the whole time I was watching the movie, a belief that was confirmed for me when upon exiting the theater, I heard several groups of people talking about how stupid the movie was, and how they just didn't 'get it'."

Day of the Woman ponders on horror facelifts and non-horror audiences..."As much as I'd like to believe that the sole purpose of horror films being made is to present something to appeal to the fan, we all know it's a load of poppycock.  Films (regardless of genre) HAVE TO MAKE MONEY."

Scared Silly gets lost and visits the wrong cabin..."A few weeks ago I had the pleasure of attending a special presentation of silent films at the New York Public Library for the Performing Arts (click here to see my write-up about the event). These weren’t just any silent films – they were silent horror-comedies programmed by Bruce Lawton with wonderful piano accompaniment from Ben Model as part of their "Silent Clowns" film series."

Strange Kids Club reveals who's really pulling the strings..."Released last week to coincide with the film, Titan’s The Cabin in the Woods: Official Movie Novelization and Official Visual Companion both offer hours of extended “bonus features.” As to be expected, the novelization (adapted by Tim Lebbon) follows the film pretty closely and as a result doesn’t offer anything new, but manages to provide some “replay value” for those awaiting the inevitable DVD/Blu-Ray release. On the other hand, the Visual Companion comes loaded with awesome content that ranges from an interview with Whedon and Goddard in which the co-writers reveal some cool nuances of how The Cabin in the Woods became what it did (including hints to Easter Eggs and cameos) to concept art, set builds and fear-filled facts about a majority of the monsters. There are literally enough ideas here for at least 2 or 3 films (hmmm… sequel anyone?)."