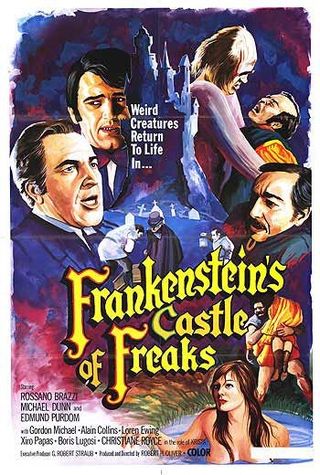 “Atrocious lighting, abominable story, ludicrous Neanderthal men dressed in furs and carrying clubs, and thrift store couture from the costume department; shall I go on?”

I folded my arms tightly, waiting for Paul Hollstenwall to counter my argument. I dared him to find a shred of decent creativity or craft in Frankenstein’s Castle of Freaks.

“Michael Dunn as Genz, the necrophilic, breast-squeezing pervert,” he replied. “He brings a little respectability to it, don’t you agree?” Paul’s wide, earnest, eyes drilled into me.

“So you’re saying the small part Dunn plays was a wise career move?”

“Well, it’s not like he can pick and choose from a variety, really. He’s a dwarf. After the Wild, Wild, West, what else is there?”

I thought about what Paul said. “True. But Genz is a long drop from playing the mirthfully nefarious Dr. Miguelito Loveless. A very long drop.”

Paul leaned back and took a sip of lemonade. We were sitting in the solarium, enjoying the warmth, peace, and quiet, next to the pelargoniums, whose scent of chocolate wafted through the room. Zombos and Zimba were out and about, hence the peace and quiet. The aftertaste of that movie still lingered in my mouth, no matter how much lemonade I drank.

There is no peace or quiet in Frankenstein’s Castle of Freaks, otherwise known as Terror! Il Castello Delle Donne Maledette. The plot ignores incredulity, but makes for a perfect accompaniment to crackers when viewed after two or more glasses of Chianti.

Dr. Frankenstein (Rossano Brazzi), using a Walmart-bought laboratory, operates on Goliath, one of two Neanderthal men terrorizing the countryside. The other is Ook, but I’ll get to him in a minute. For now, just sit back, close your eyes, and think about it. That’s right. It’s that awful and dopey. This is the first time I’ve ever used the word ‘dopey’ in a review.

Genz is one of Frankenstein’s assistants, but his habit of feeling up the nocturnal goods, fresh from the grave, gets him into trouble. He’s sent packing, to roam the countryside simmering with revenge on his mind. He and Ook find each other and become fast friends. Ook is the other Neanderthal terrorizing the villagers. Genz teaches Ook all he knows about sexual deviancy, which terrorizes the villagers even more. Even Mexican horror movies don’t stoop this low.

Frankenstein’s other assistants include a lecherous hunchback (“come with me, we go to woodshed!”), who fools around with the cook. The cook looks a lot like the ugly sister, Doris, in Shrek. Their pantry hanky-panky upsets her husband, the clumsy butler, Hans (Luciano Pigozzi). Visiting the castle are Frankenstein’s daughter Maria (Simonetta Vitelli) and fiancé, and her friend Krista (Christiane Rucker), who studies science and becomes fascinated by the savings Frankenstein accomplishes by using all that Walmart laboratory equipment. A portrait with moving eyes watches Krista take a bath, and eyes behind a wall clock’s glass door watches Maria make love to her fiancé. We watch in horror—not the good horror movie kind—as flaccid close-ups, lethargic pacing, and choppy zooms make high-school theatrical endeavors appear to have more carefully arranged production values than this production. The accompanying music sounds mostly like someone gargling throughout the movie.

While Frankenstein shows Krista his “accumulator,” Genz shows Ook how to cook meat in Ook’s real man-cave. Gratuitous nudity is provided by Maria and Krista bathing in the man-cave’s natural hot tub, but they act like sisters unfortunately.

Not much heat is generated by the sparse showing of townsfolk, who light the torches to go after Ook when a local girl is killed. When Genz sneaks back to the laboratory to free Goliath, that Neanderthal brute kills the hunchback, the butler, and Frankenstein. I confess I was glad he did that. After Ook grabs Krista—she returned to bathe in the man-cave again—he and Goliath go into smackdown mode. Both smack each other back and forth until Goliath kills Ook.

The villagers show up to kill Goliath.

Inexplicably, Krista hugs Genz, the homicidal pervert as the movie ends on a philosophical note when someone sums it all up: “There’s a bit of a monster in all of us.”

Travelogues have more drama. Watch one instead.