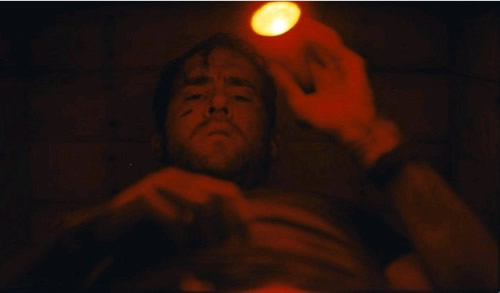 Buried is a minimalist horror movie with maximum terror.  Big screen, little screen, this one will make you squirm.

Chris Sparling's story and Rodrigo Cortes' direction emphasize what we hear over what we see, although what little we see is horrifying. We cough out the stale air, cramp up our tense limbs, and feel the desperation, the isolation, and despair Paul Conroy (Ryan Reynolds) is being smothered in, minute by minute, as he uses his one hope at hand, a cell phone. We see and hear him, but we only hear the others from the cell phone: the FBI, the family members, the corporation he works for. They are the people he desperately calls from the Blackberry entombed with him. They aren't very helpful.

Every voice, every response to his growing frustration, seems to be heaping more dirt onto his coffin. Those voices aren't soothing. They say things that are, given Paul's dire situation, ludicrous or infuriating or unsympathetic. It's another day in Iraq and Paul's another civilian buried somewhere in the ground, alive, held for a ransom that no one's willing to pay. And we stay with Paul the entire time. No flashbacks, no chipper moments away from his predicament to ease the tension.

Movement within the wooden box is limited of course. Paul's got a Zippo lighter, a cell phone using Arabic, and time is running out as fast as his oxygen is. Above him the military is pounding the ground harder with bombs, sending sand into his cramped space, cramping it even more. No one seems to share Paul's ire, or fear, or sense of urgency. When he makes calls he gets voice mail prompts, he's redirected to others, and he hears a lot of stay calm, be patient recommendations. Watching this movie, you realize how intrinsically stupid it sounds every time you hear "stay calm" or "be patient" uttered in a movie.

Maybe finding the exposed nail in his coffin, to tear through the bonds on his wrists, could be called a plot convenience, but that's the only one. And while I'm not sure how many truck drivers in Iraq carry Zippo lighters, I will say it's now my favorite example of seamless product placement in a movie. Both the Zippo and the Blackberry are actors along with Reynolds. Both play crucial roles in shedding light and insight in and around Paul, his predicament, and who the real criminals are. These aren't terrorists he's told, they're criminals looking for money. That doesn't lessen his terror because the criminals' requests to make phone videos still terrify him.

Increasing his terror are his company's personnel director who does something so outrageous, yet so possible (I'm betting anyone working in a corporation for a long time will agree with me), and a hostage negotiator who's not overly reassuring. He can't even remember who he's saved. He does eventually come up with a name, but don't forget it because it comes up again at the end, when time runs out.

This is the first time I've awarded classic status to a movie this early because it takes the common horror theme of being buried alive beyond its usual limits. It leaves its audience with questions and no answers, and a discomforting feeling it's too possibly real. I can say two things with certainty after watching Buried. I'm going to be carrying a Zippo lighter from now on and I'm waiting to see what else Rodrigo Cortes and Chris Sparling dig up. Those two scare me.

I hadn't heard of this movie until I saw it recently on the shelves at Blockbuster. I enjoyed it very much in terms of it making me feel very uncomfortable, and the ending was depressing, almost as much as The Road. Due to the confined space my wife wouldn't even watch it with me. I thought the film would begin in the box and then move to other scenes to maintain an active storyline. But the whole film takes place in the box, and this is the most creative use of a confined space in cinema since Twelve Angry Men. I agree. This is a great film.