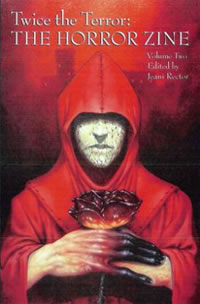 Lately I've been waking up
Where I am, I cannot tell
It seldom looks like paradise
And it usually feels like hell
(from Lately by John Frazee)

I've been mostly disappointed with the spate of small press and digital press horror books and comics pouring out of late, especially those solicited to me. Either the writing is mediocre or structurally bad, or the comic art is so attrocious it soils the story--you know, like spilling a bowl of soggy bran flakes and milk on a table: a mess that not only looks terrible but becomes worse the more you look at it as you wipe it up.

Then I go and succumb to another request. Perhaps, deep down, I'm hoping to find a diamond in the coal pile. My stone wall of decisiveness cracks and I agree to review another book or comic, dreading having to say it's not what it should or could be in case it turns out to be not what it could or should have been--in my opinion--so don't bum-rush me with invectives about that: all reviewers have critical opinions.

Twice the Terror: The Horror Zine is not quite a diamond, but it shines almost as much with its stories, poems, and art. It's edited by Jeani Rector and anthologizes submissions to her Horror Zine website. Her impressive selection of stories, finely printed by Bear Manor Media, are what I hope for when reading an anthology, and provide a variety of lengths and styles and glimpses into the ether between terror and the unknown. Paragraphs, poems, and graphics read shoulder to shoulder instead of poking you in the eyes with shoddy typesetting or a high school sense of layout. I'll just mention a few of my favorites, but this anthology is full of high caliber work.

Terrence Faherty's Uncanny hints at an older style of foreboding, one akin to an Arthur Machen story where spirits best left unseen refuse to hide. Or is it the main character's unhappiness about being forced to take an Alaskan holiday that's causing some fellow passengers on the cruise to vanish? Mean spiritedness or a mean spirit at play? Faherty does his best to leave you guessing.

Were I forced to confess to my absolute favorite story in the anthology, it would have to be Christopher Fowler's The Threads, in which an unhappy couple, the Markhams, taking holiday in Africa, hope to keep their marriage from completely unraveling--she hopes, anyway. Unfortunately for Mrs. Markham, Mr. Markham begins to unravel after he insists on stealing a small carpet from an odd little shop. The desperation from being in dire need in a foreign land, where aid is not forthcoming, creates a level of tension in this story that energizes the macabre situation the couple finds themselves even more.

A Bad Day is had by Melanie and the robber who shot her in Larry Green's quick and tidy story of a deadly convenience store robbery, but it turns out to be very convenient for Melanie in the end. In the same vein, Soul Money by Terry Grimwood is a quick journey into and out of evil, only the lucky wallet Nick finds turns out to have a really big and nasty owner who insists on being paid every last cent. It's a stretch that, nearly ludicrous in it's idea, still manages a wicked-wild sense of comeuppance scariness, the kind often seen in anthology television shows like Tales From the Darkside.

The poems, including those from Joe R. Lansdale, Peter Steele, and Alexandra Seidel, to name a few contributors, either ryhme or don't, and set the odd tone, the out of place, and a conjuration of lightness and heaviness in lines describing twisted thoughts, weird imagery, and unhealthy situations. The artists are just as disturbing (or is it disturbed?): I'll leave you with this happy couple photographed by Beth Robinson. She must have taken this right after they read Twice the Terror. 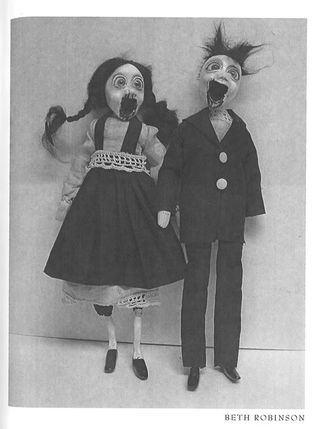 A courtesy  copy of Twice the Terror: The Horror Zine was provided for this review by Jeani Rector.