« My Halloween: Blog of a Dead Dreamer | Main | Twice the Terror: The Horror Zine Book Review » 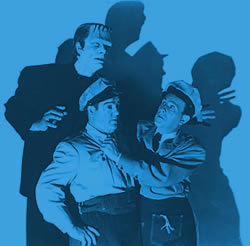 “Important” is too strong a word for me to use in this case. My relationship with Halloween is one of “pure fun.” Specifically for me it’s become a time to revisit some old-school horror flicks (the more black & white the better). I’m not a big costume guy – used to do that more when I was younger. And I’m on a diet so I’m trying to limit my candy consumption!

But there is one thing that has become a Halloween tradition for me: I hold an annual Halloween movie night at my office. I try to keep things on the light side with classic horror films and horror-comedies, or films that fall into the PG realm without graphic content (whether it’s classic TV movies like “The Night Stalker” or recent animated hits like “Monsters vs. Aliens”).

I think I just did – as long as I can watch some fun spooky movies I’m set!

I love movie posters and lobby cards, old movie magazines, trading cards, comic books, books about old movies and the films themselves (when I was a kid in the 1970s that meant Super 8 digest versions of the classics; as an adult it’s the entire films on DVD). Not that I actively collect any of the above with the exception of the movies and books about them. But from time-to-time if I run across an interesting item I pick it up.

When was your very first Halloween, the one whereyou really knew it was Halloween, and how was it?

I can’t recall the year but it had to the early 1970s. I had a Batman costume, but it wasn’t one of the cheesy vinyl costumes with the plastic masks – this was a cloth costume with a cloth cape and I believe it may have had a cloth pull-over cowl as well. I’m guessing this was from Sears or some other department store. Within a year or two of that Halloween, my sister and I made a Spider-Man Costume – she sewed it and I used permanent marker to draw all the webbing onto it! It was cool because it had a pull-over mask that fully covered my head and I insisted that we use gauze for the eyes so they could be white (enabling me to still see-through the mask).

Q: If you could go back in time and watch any movie you wanted in a theater for Halloween, what would it be?

A: My answer would have to be the classic William Castle-directed Vincent Price starrer “The Tingler” – complete with the rigged seats!

Nice selection on "The Tingler!" I'd love to have seen that one in theaters myself, Castle always was the showman-type.