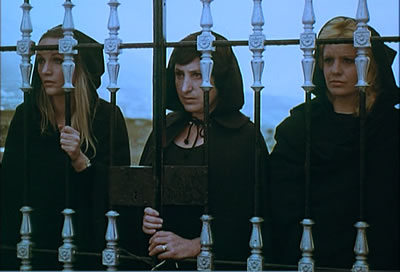 "If any of you want to accompany me to the cemetery
you better get ready. I'd like to know who died."

Ripped from the case files of the League of Reluctant Reviewers comes this bizarre interpretation of a horror movie. It is incomprehensible. It is Spanish. It is nonsensical. It is so bad it is as much fun to watch as to belittle. It is Necrophagus, aka Graveyard of Horror, aka The Butcher of Binbrook.

Since the direction is amateurish, the acting wooden and the script confused, one can only conclude that it was Nieva's Eastmancolor cinematography that won the film first prize at the 1971 Festival of the Cine de Terror at Sitges. (The Overlook Film Encyclopedia: Horror)

"Your hand is shaking Mr. Bolton," observed Chalmers as he ushered me into the familiar room.

The weather had turned wetter, chillier, and foggier than was usual for May. That was my excuse anyway. My hand started shaking during the long walk to 999 Transient Street, the club where the League of Reluctant Reviewers hung out. I only come here when Zombos and Iloz Zoc do not want to bother themselves with reviewing certain movies. You know, the difficult ones. The movies normal people feel ashamed to be caught dead watching. Those guys act like critic-wimps sometimes, especially when Paul Hollstenwall is involved.

I have taken this trip often enough thanks to Paul, but it is rare for my hand to start shaking. The hand that holds the DVD. It was shaking badly now; almost as bad as when I had brought The Human Centipede to the club the other night. But that's another story. A real wild one. I must still be shell-shocked from that escapade.

"Perhaps I should take your wet coat and that DVD," he suggested. He shook the drops off my coat while gingerly easing the DVD from my clenched fingers.

I usually bring the DVD to the Champagne Room myself, but this time I let Chalmers do it. He led the way. The owner of the club, the unseen man with chalk white hands and a voice as smooth as velvet, sitting in the Chippendale wing chair always facing the fireplace, welcomed me in.

"And what have we tonight?" he asked, reaching out from the chair. "Hopefully, nothing as, shall we say, challenging as that previous movie?" He chuckled, but a little nervously.

Chalmers gave the DVD to him. Both hand and DVD withdrew behind the chair.

"Ah, I see. This should not take too long at all, I think." A white hand reached out to ring the bell sitting on the small table by the chair while Chalmers escorted me to the small waiting room, where a comfortable settee and comforting drink awaited me. This time Chalmers chose a warm Tom and Jerry instead of the usual chilled sherry. Good man.

I closed my eyes and let the hot liquid dribble down my throat, and waited for the League of Reluctant Reviewers to once again do their review magic.

A mad scientist, somewhat dead and feeding off corpse liquors to stay that way; a gaggle of women prone to hysterics and fits of slapping each other; and a skulking cemetery keeper, Mr. Fowles (Victor Israel), who gives googly-eye stares and never changes his clothes, infuse Necrophagus with unintentionally humorous melodramatics topped off by an inane story so incoherently told you will need to search Google for understanding it before you see it.

Even more surprising, you can't blame Jess Franco or Paul Naschy for this one.

The short of it has handsome Lord Sherrington (Bill Curran) return to his family castle in Scotland (actually shot in Spain) to find out what happened to his wife Elizabeth, who died in childbirth. Sherrington's brother, a research scientist (or something like that) also happens to be missing. A lengthy narration at the end of the movie explains what his brother was doing and why he went missing, but at this point, for anyone still watching, it comes too late and doesn't explain much anyway.

The long of it has two doctors acting rudely and mysteriously; Elizabeth's frisky sisters and a niece (sorry, no nudity) either pining away for or fainting over Sherrington's affections; the cemetery keeper skulking around a lot with his annoying pop-eye stare; Sherrington's fondness for playing a tune—which sounds very much like On Top of Old Smokey—repeatedly on his harmonica.

Add a police inspector investigating the brother's disappearance (at least that's one possibility for the policeman’s loitering around the castle since no reason is ever mentioned), two Scream-like robed and masked attackers loitering around the cemetery day and night, and another doctor who must be a villain because each time he enters a room, the camera zooms in on his face while zither-like zing-zing-zing musical notes alert us to his potentially villainous role.

There’s also a fast change of seasons with snowball fights and summer-like greenery mixing together within a time period not more than a week or so long by my reckoning, so that’s fairly confusing, too.

When Lord Sherrington insists on playing his harmonica and seeing his wife's body, he's rebuffed by the doctors and the cemetery keeper. Entering the cemetery at night, he starts flinging dirt at the camera—pretty funny, really—as he digs up his wife's coffin to find it empty. More dirt is flung at the camera as he digs up other coffins, also finding them empty. The two robed and masked loiterers knock him out cold and drag him someplace where a pulsing mound of dirt has tubes running out of it. He wakes up. Something in the mound of dirt wakes up. He screams a lot and that's all we see: him screaming a lot.

Director Miguel Madrid's penchant for close-up monster point of view angles, showing people on the ground screaming and holding up their hands to fend off an attack from the unseen growling something, don't do much to raise the scares. Needless to say, Sherrington goes missing; but not his harmonica, unfortunately.

Endless scenes with the gaggle of women reminiscing over their lust for him (or perhaps it was his lusty harmonica playing?), berating each other for their lustful reminiscences, or holding hands and looking scared as they go searching for him in the Scottish castle that's not in Scotland, round out the rest of the 80 minutes or so running time. As well as close-ups of a gloved hand poked into an overcoat's pocket, moving from room to room, legs walking, and startled faces, punctuated now and then by the first few notes of On Top of Old Smokey or zing-zing-zing music for dramatic effect to complete the tour de force of cinematography on display here.

When the monster finally does show up it goes after a girl so it can pointlessly carry her unconscious body in its arms while walking into a hail of police-fired bullets. Scratch one monster posthaste.

Devout fans of early 1970s Spanish horror movies will argue Miguel Madrid brilliantly and intentionally fragmented Necrophagus by shooting it non-linearly and then raggedly cutting his scenes to create disorientation in the viewer.

Broadcast TV? I vaguely remember watching that ;) And fiddling with rabbit ears to get better reception until that newfangled cable thing came around. I recall the theaters running "what's under the sheet?" promos against it. Cable, I mean, not the rabbit ears.

Wow. I saw that one on good ol' broadcast TV (remember that?) thirtysomething years ago, and remember little but its essential incomprehensibility, which you have captured nicely. Might be time for a re-viewing if I can lay hands on it... Thanks for the blast from the past!