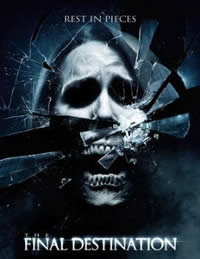 "What are you doing?" asked Zombos.

I dog-eared the page I was reading. "I'm sorry?"

"You have not written your review of The Final Destination," he said.

"You see, there, that is your problem. You are not creative enough. Now, I have been thinking of ways you can add je ne sais quoi to your reviews. They have been rather stale lately."

"Really?" I said, but not with much enthusiasm.

He continued, ignoring my lack of enthusiasm.

"Yes. For instance, why not look at doing a review in a completely different way."

"Way." He jabbed his right forefinger into his left palm." Take The Final Destination." He rested his forefinger on his chin. "Let me think, yes, I have the perfect answer to creatively review it: Walt Whitman." He waved his forefinger for emphasis.

"Yes, Walt Whitman, Leaves of Grass: I hear America Singing. There. Now go, fly with it!"

He flew out of the room, leaving me with one of those conundrums in a peanut shell situation we all face now and then. I seem to get them a lot, though.

If Walt Whitman were a zombie he'd eat me for sure after this.

I Hear the Deathly Screaming
in The Final Destination

I hear Nick and Lori, Hunt and Janet screaming, and cussing, and breathing heavy and hard, their varied shrieks of fear I hear,

From death's mechanics, each one swung with his scythe wide, as it should be blithe

and strong, whilst whacking heads and limbs akimbo, bone and muscle, and formerly high spirits,

and everywhere else they run

Nick shrieking his premonitions, he measures his chances, nail and coffin width long, as George the security guard runs in fright from his inevitable smackdown, tries hanging himself,

but still no good
Lori hissy-fitting her bewilderment as she makes ready for ignoring death's hooves fastly approaching, or leaves off
salvation by not believing in Nick's foreshadows of graveyard co-ops, for all, coming soon enough,

Hunt bemoaning Charon's dire boatman dirging of what belongs to him in his rotting boat, the pool man cursing the
sticky mess Hunt leaves behind, all suckered innards spouting in fountains of grue, clearing out the pool real fast, as sparking electrical circuits burn bright

Janet screaming as she drives through her car wash, the bristly-brushes whizzing closer as she sticks her head in their way,
but stay the Grand Guignol hand and spoil the girl,
to vain thoughts of
giddily escaping death's plan
until later, when he can dish it out even worse, of course

Lori's song of mistaken relief, the deathboy's not on his way in the morning, or at nooning intermission, or at sundowning, to sharpen his blade 'gainst wet red oozing twitching body parts

The delicious grinding of the escalator, or zinging of the shearing metal flying, or the phat tire splatting, or the
air-compressed canister flattening, all in marvelously punctuated 3D
Each groaning what body parts belong to him or her and to no one else, though it's all mixed up

The day what belongs to death—at night the parade of dead
teens, robustly still dead, or dying, or waiting their turn
Screaming with open mouths,
when left intact,
their strong outcries in stereophonic crescendos, 'gainst awaiting another destination,
'cause it ain't over yet 'til the fat lady gets hers

or the audience stops coming,

but then they'll reimagine,
rework,
rewrite,
rethink,
rekindle
this franchise till no one else remains,
but death grinning over all

It is fun. Definitely much more so because of 3D. But the focus keeps it Rube Goldberg deathy, so that's the only thing that keeps it going. I thought the opening credit sequence, and the last, were stylish.

ha! It's funny you've just posted it because i've only finished watching this movie about 20 minutes ago. I actually thought it was ok, but not the best of films.