« Interview: Kim Paffenroth Dante in the Valley of the Dead | Main | Helena the Hussy of Horror Strikes » On the surface, the comic is about a skull-headed robot who fights giant monsters from Greek Mythology. From a storytelling standpoint, however, it's somewhat a reworking of Frankenstein meeting Homer's Odyssey- it's the story of a thing created by Science who goes on a Hero's journey of sorts to find out who he really is...(Thomas Hall, co-creator, Robot 13).

Thomas Hall and Daniel Bradford bring their talents together to create Robot 13, a slightly Gothic, somewhat mechtorian-styled robot with amnesia and a purpose. With meticulously drawn illustrations that would give Hellboy a run for the money, precise panel narrative, and enough mystery to keep even Sherlock Holmes happy, this series looks promising. After reading issue 1 I was left disappointed that it was only 24 pages long. I wanted to read more. To assuage my depression until issue 2, I asked Hall and Bradford a few questions.

You've taken mythological elements, blended in a bit of steampunk, and added a quest for identity. What led you and Daniel Bradford to choose these elements for your storytelling?

Thomas: When Daniel showed me his sketches of what eventually became Robot 13, I knew we needed to do something really unique with him, but I wasn't sure exactly what. At the time, we were pitching a story including a version of that robot for a CGI project, and when that didn't work out we decided to do something totally different with a comic than we did that pitch.

I have always loved giant Japanese monsters and anything Ray Harryhausen did, so I wanted to see our robot fight some BIG creatures. Daniel drew a shot of the robot having just killed a Kraken, so I jumped at that. Daniel mentioned Frankenstein as a point of reference for our story, and we talked about that a lot. Both of us have a love of the old Gothic literature and art, and adding those elements with a modern spin on them was an attractive idea to us. For a while, it seemed like we had too many ideas, so we thought about it a lot and I did some research to try and find some common ground in it all.

Around that time, I was flying out to Arizona to the Phoenix Cactus Comic Con to do the show with Daniel, and I brought a notebook with me that had everything we had talked about and Daniel's sketches and other notes. During that 4 hour flight, I worked out what wound up being the basis to the Robot 13 back story. Sure, we have tweaked a few things and it's evolved over time, but during that flight I found a way to incorporate everything that we both wanted to try in a comic. When we had a moment, I told Daniel what I had come up with, and with only a few minor changes we pretty much had our direction. 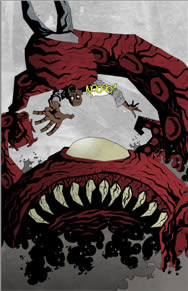 R13 looks like a cross between a Halloween snowglobe and a luxury liner's smokestack. How did his look evolve?

Daniel: The design evolved around an idea about a haunted robot...a robot without circuits or any sort of fine technology but controlled by a ghost or a spirit of some sort. The robot itself was inspired largely off of old diving suits and the skull was added as a way of providing the human element and a head for the robot.

Why does R13 have a skull in place of a head?

Daniel: I can't get into any of the particulars about that specific skull, but design wise it provides an element of humanity and an obscure idea of the robots history.

Thomas: As part of the back story, that skull has meaning. That's all I can say at the moment without tipping our hand.

Can you give us a taste of what R13 will be up against in future issues?

Thomas: Issue 2 will feature a massive battle between Robot 13 and a Phoenix, and Issue 3 will feature a fight between our hero and a Cyclops. Every issue will have some exciting elements in it, but we will also give the reader pieces of the back story too. Hopefully, readers will love that aspect as much as the giant monster battles, and they will try to piece it all together.

I think there will be enough twists and wrinkles as to not make it TOO easy to figure out, but it will all make sense in the end. At least, that's the goal.

Working together since 2003, Hall and Bradford front Blacklist Studios. Other projects include their first series together, a moody, supernatural tale of serial killers and the apocalypse called “Enlightenment,” and the raucous action-comedy “KING!,” about a certain side-burned, peanut butter-and-banana-sandwich-eating rocker turned monster killer.