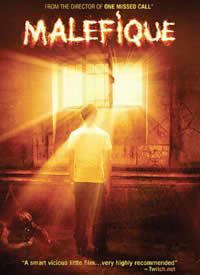 Zombos Says: Very Good (Let me know if the ending here reminds you of the one in Being John Malkovich)

Four characters in search of an exit sustain and disdain each other's mauvaise foiin this incarceration screenplay involving a serial killer's dark arts journal written in 1920. With freedom just out of reach beyond a barred window, a locked door and four dreary walls complete their bleak prospects for salvation.

The beginning teases us with Danvers, the murderer who fears growing old, busy in his fetid cell and not alone. A crispy-charred corpse frozen in agony and one unfortunate individual with a gaping chest wound hint at arcane mischief afoot. Danvers casually dips his fingers into the man's wound and draws blood to draw mystical symbols on the wall of his cell. Gore is sparsely used in Maléfique, a film directed by Eric Valette, but when it is, its brief, dramatic appearance provides suitable goosebumps.

Present day. Of the four men imprisoned in the small cell, the only one with hope of freedom is newly admitted Carrère (Gérald Laroche), but as time passes he grows more despondent and desperate to see his son again. His three cellmates are Marcus (Clovis Cornillac), who is midway between being a man and a woman and hoping for the latter; Lassalle (Philippe Laudenbach) who no longer reads or dares to listen to the many books involved in his wife's murder; and Pâquerette (Dimitri Rataud), who is an insane child dressed like a man. He eats anything and everything, has had a very regrettable childhood--though not as bad as his 6-month old sister: she fared worse because he eats anything and everything--and he likes to make visits to the prison infirmary, necessitated by acts of self-mutilation.

The book draws their attention at first, then gives it back, allowing us glimpses of their temperaments, temptations, and failings. Patience can be a virtue in French horror cinema; for every Haute Tension there is a quieter, more studied approach to building a sense of foreboding and ultimate dread, like in Sheitan; and in Maléfique, director Valette and writers allow Carrère, Marcus, Pâquerette, and Lassalle's shadows to overlap without them ever touching each other. Each man is what he is and they wait in a room with no exit; until the book appears.

How it wound up hidden in their cell wall is not important; neither is how the erudite Lassalle knows so much about its notorious author's quest for a fountain of youth. Much is left intentionally unexplained--like a good Japanese horror story-- giving us a mystery, a mood, and imperfect men desperately looking for a perfect escape, which creates tension from their few agreements as much as their many dissents. Carrère, the cold business man, is the first to realize the journal's commercial value; but when his bail does not materialize, and his wife divorces him, he realizes it may be his last and only way to see his son again. Much like Lemarchand's Lament Configuration, Danvers' journal, filled with magical spells and cryptic symbols, is a mean's to an end, an end to all means, and a puzzle that intentionally mismatches the pieces; and the same caveat emptor warning applies here as well. 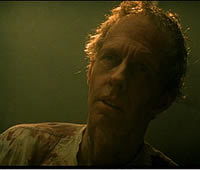 When Pâquerett, in his childlike simplicity, draws a symbol from the book onto the floor and persuades Carrère to recite an incantation the symbol suddenly bursts into flames. Quickly, the men realize the power that lies within those pages. A second test symbol drawn on the wall throws them off their feet after another incantation is muttered. Carrère wants to study the book and asks Lassalle for help, but Lassalle protests, saying he can no longer read. Marcus wants no part of it, either. As for Pâquerett, the wall eats his fingers as an appetizer. Unable to control his oral fixation, he pigs out on the pages of the book; but the book defends itself as Lassalle later points out. In the most startling and grotesque turn of events, Pâquerett gets turned and turned, first like a pretzel, then like a corkscrew, eventually giving a little quiet pop like a fine champagne. There are no screams, no showers of blood and gristle; just terror culminating in death in the night and a growing fear of the book, even though their desperation for escape is stronger.

Distraught over Pâquerett's death, Marcus throws the book out the window. Not so surprisingly, it returns, along with a fifth cellmate whose fetish for recording everything with a video camera shows them the way out. Will they use the book to escape? Will Carrère be able to see his son again? Sometimes, a room with no exit can be the safest place to be.

Unless, of course, you find an old book stuck in the wall.

Danvers. Oh how I love to find nods to old movies in the naming of characters.