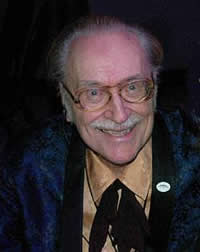 Scott Essman remembers the Man of a Thousand Famous Monsters...

If there were any movie monsters on the radar of young boys from the Baby Boomers to Generations X and Y, it was surely due to the influence of Forrest J. Ackerman, who died today at age 92. From 1958 through the early 1980s, Ackerman edited over 200 issues of the fanzine "Famous Monsters of Filmland," a monthly magazine that is more responsible for the proliferation of genre fans treasuring their knowledge of science fiction, horror, and fantasy facts and personalities than any other publication like it - and very few were or have been since.

"Forry" as his fans knew him (also Count Alucard - Dracula backwards) was more than a publisher, collector of memorabilia, and ultimate fan, of which he was probably the greatest at each endeavor as far as his chosen genre; he was the spiritual father of all things monsters and space adventure. He was the ultimate champion of the marginalized B pictures that burst onto the scene in the early silents and became a mainstay of youthful picture-going. He was a figurehead who represented the wealth of pure joy that fans feel for their favorite films and heroes - and often villains - from those tomes. He was all of those things, but even more than that, director and Ackerman friend John Landis once called him "generous to a fault" when asked to describe his mentor - who he often put in his films in cameo appearances. Ackerman was renowned to give free tours of his Hollywood Hills "Ackermansion" a house where he kept numerous props, books, and other items from his favorite projects of the past. 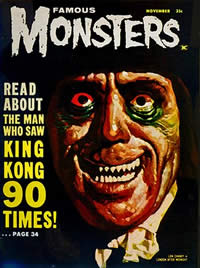 When Famous Monsters debuted in 1958, traditional science fiction and movie monsters had given way to atomic-age grand-scale epics and low-budget monster quickies.  But Ackerman, through his own personal interest, appealed to the 12-year-old boy that he eternally became by running photos and stories of bygone horrors such as the Universal Monster classics, and exalting the triumphs of their creators, such as Frankenstein director James Whale and monster makeup guru Jack Pierce, while giving due credit to the Boris Karloffs, Bela Lugosis, Lon Chaney and Chaney, Jrs. and their ilk. Also easy to forget is that in 1958, no publication existed as "seriously" dedicated to the study of movie "sci-fi" - a term that Ackerman coined - and the behind-the-scenes aspects of movie ghouls and gremlins. In fact, the explosion of genre movie magazines in the wake of Famous Monsters is undoubtedly due to Ackerman's genuine passion for the field, a dedication that he imparted to his legion of readers, many of whom number the top makeup artists and directors of the past thirty years.

As is often told in fan conventions and festivals, the generations of Boomers and Xers who first read Famous Monsters often had to sneak out to the newsstand to get the latest copy behind their parents' backs, then read it in their closets with flashlights on after bedtime. In the end, now that his original audience has had children and a new group of Gen Y and millennials have come around to discover old issues of FM via eBay, Ackerman's pursuits as editor of Famous Monsters and a noted Hollywood personality probably had an impact on more people than he could possibly know. As was carefully documented in Paul Davids' documentary "The Sci-Fi Boys," Ackerman, along with his close friends and peers, including author Ray Bradbury, and stop-motion animator Ray Harryhausen, created a whole world of fans who went onto become creators themselves. 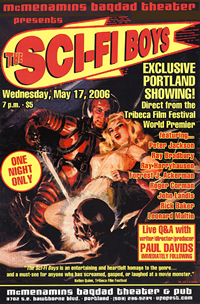 Evidently, from the films of Steven Spielberg and George Lucas, to the stories of Stephen King, to the homages in the films of Peter Jackson and Guillermo del Toro, Ackerman spawned not only a vast fan base but an equally large and committed group of aspiring artists. And as any who knew him could attest to, he did so with graciousness and an abundance of love for not only the films themselves, but also the people involved - in both the making of the movies and the sheer numbers of fans who celebrated them. In the realm of science fiction, fantasy, and horror, that makes Ackerman a wholly unique individual whose kind will not likely ever be seen again.

Posted at 07:06 PM in Reflections | Permalink

I just saw a special on Forry that aired on the Space channel this past October. This man was truly a pioneer, and will be missed.

Uncle Forry was a great pioneer for the new global language, Esperanto.