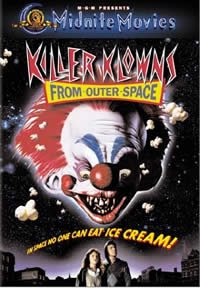 "Mr. Zoc! Mr. Zoc!" cried Glenor Glenda the maid, running down the hall from the pantry.

"I'm rather busy blogging," I told her.

"But you must come at once! Mr. Zombos is taken ill."

"Where's Chef Machiavelli?" I yelled back.

Great, I thought, definitely a takeout night. Must I do everything around here? I am, after all, only the valet. I pushed aside my laptop. Killer Klowns From Outer Space would have to wait until I attended to Zombos. Again.

I found him stretched out cold on the floor. A black DVD case was clutched in his right hand. A post-it note read ‘You’ll love this one. Paul H.’

“Oh, lord,” I mumbled, “when will you ever learn?” Zombos always reacted badly to any of Paul’s you’ll love this one DVDs.

"Fetch some Scotch whiskey, if you please," I told Glenor. "And make it snappy."

She quickly returned with a poor choice.

"Have you no sense of decency, woman? Not the vatted malt! We need something stronger. Bring back the Royal Brackla. The man’s unconscious for god’s sakes. I mean really."

“Wait! Here, let me have that.” She handed me the shot glass, spilling a little of the liquor, then hurried on her way. I gulped it down. Not bad, actually.

She returned with the Royal Brackla. I poured some into the shot glass and took a gulp. Perfect. It was going to be a long night.

I then poured another glassful and lifted Zombos’ head to pour a bit of the liquid through his lips. He awoke with a cough and a request for more. Good man.

"Well, I can only hope you’ve learned your lesson." I said. "Now if you will excuse me, I have a review to write. Glenor, see to it he’s comfortable. And after he’s comfortable, stoke up the fireplace, make a nice cheery fire, and toss that DVD from Paul Hollstenwall into it before anyone else in this household is tempted to trod where no sane movie fan should.

I returned to my writing the review for Killer Klowns From Outer Space.

I am not quite sure what the Chiodo Brothers were thinking when they pitched this idea for a movie, but it does have its charms (for horror fans, anyway). How can you not like a story about aliens that look and dress like grotesque clowns and use Krazy Straws to sip the body fluids of hapless victims they’ve sucked up with a giant vacuum? Just about everyone in the small town of Crescent Cove is turned into a jumbo-sized cotton candy treat with a nice gooey center before you can finish saying “popcorn’s ready.” And I mean the friendly type of popcorn, not the type that eats you they pop up in this movie.

Considering the low budget for the movie, the art direction and production design are fairly imaginative. If only the acting were a bit more top-notch. Anyway, with veteran character actors like Royal Dano and John Vernon, the other so-so actors were buffered a little.

Before Mike (Grant Cramer) and Debbie (Suzanne Snyder) can get back to their snuggling, a bright object shoots across the sky and crashes not too far away. In true '50s horror movie fashion (like in the Blob), they are off to investigate. Given a choice between heavy petting or chasing down mysterious objects crashing in the deserted woods, horror movie “teens” always go for the crashing object.

While they head to the scene of impact, Farmer Green Gene (not Captain Kangaroo's bud, but Royal Dano), and his dog Pooh (I know your groaning, but I’m not making this up!), also see the crash and head out to investigate. Gene and his dog find a circus tent in the woods, only it’s really the alien spaceship. A funny gag has Royal Dano walking along the colorful side of the tent in tandem with a klown's shadow tagging along. The circus fun and excitement atmosphere turns to terror for Gene and his dog when they are captured and cotton-candyized.

Mike and Debbie are next to discover the circus tent spaceship and decide to enter it. You’d think your average person would probably find a circus tent plopped down in the middle of an isolated woodland setting crazily suspicious, but then we wouldn't have much of a horror movie would we if they just did the smart thing and ran away? Being smart in a horror movie doesn’t mix well to produce terror, right? Although it would be a refreshing change of pace.

One interesting flub to watch for has Debbie's arm briefly disappearing behind the matte painting of the tent spaceship as they get close to it.

Another effective matte shot, which is also a nod to Forbidden Planet, is seen when Mike and Debbie enter a room reminiscent of the Krell's huge power cell chamber. As they explore the ship and realize it is not part of Cirque du Soleil, the clever use of colorful carnival and clown-like objects—like red rubber balls used for door buttons—extends the limited production budget with style.

Soon they're running for their lives with two klowns and one sniffing balloon dog hunting them. They escape, but the whole kit and caboodle of killer klowns, armed with a wacky assortment of lethal weapons, heads to town in search of late night snacks.

Mike and Debbie try to convince incredulous police officers Hanson (John Allen Nelson) and Mooney (THE master of the stare down, John Vernon) a bunch of klownish aliens are wreaking havoc in town. A series of bizarre, Looney Tunes-inspired, scenes includes a lethal Punch and Judy, pizza delivery a la killer klowns, clumsy klowns knocking over shelves in a pharmacy, and an ugly mini-klown knocking a biker’s head off with gusto.

The first has a nasty-looking killer klown enticing a young girl away from her mom as both sit in the local burger joint. Behind his back he holds a very large, brightly colored mallet. His intentions are clear to us, but not to the innocent, fun-seeking youngster. While this plays on how the appearance of a clown can automatically trigger expectations of enjoyment, especially for most children, the scene takes this expectation into darker directions, making it comical, ominous, and frightening at the same time, especially if you’re a parent planning a birthday party.

The second scene involves a bus stop, a few tired adults waiting for the late-night bus, and another killer klown who shows up to entertain them with hand-shadows thrown on the side of a building. This stop-motion realized scene (I miss stop motion) is humorous, surreal, and again plays off pleasant expectations subverted into unpleasant terror when the hand shadows make a grab for everyone.

The third scene has one intestinally-gutted and dead-eyed Officer Mooney playing ventriloquist dummy to one particularly tall and mischievous killer klown. Officer Hanson, treated to this bizarre vent act after finding huge klown footprints all over his jail, cracks a brief smile—until he realizes the lethal intent of the big bozo. The squishy-suction sound in this scene is very disgusting. I’ll let you guess what the vent dummy’s strings were made of.

Now, if you were a killer klown, where would you hide? In the amusement park, of course!

So off go our heroes to rescue Debbie, who was captured and trapped inside a really big beach ball. And if you have a bunch of killer klowns with pies in their hands, who do you think should get hit with them? Why, mouse-dancing Soupy Sales of course! Unfortunately, the small budget did not allow Soupy Sales to be flown in for the shoot. Bummer. (Google Soupy Sales if you don’t know who I mean.)

The zany Terenzi Brothers show up in their ice cream truck and join Mike and Officer Hanson. The Terenzi’s get separated from the others and wind up with a pair of big-bazoomed female klowns. As the brothers klown-around with their new dates, Mike and Officer Hanson enter the cotton-candy room where Debbie is imprisoned. They rescue her, but are discovered and a chase ensues through the many weird compartments of the spaceship. After making their way through a doorway with a near limitless amount of doors to open they are trapped and surrounded by the killer klowns.

In the nick of time, the Terenzi Brothers burst in with their ice cream truck—did I mention it has a big clown's head on it’s roof?—and use the truck’s loudspeaker to tell the klowns to bug off. The klowns, mesmerized by this bodiless comrade seemingly speaking to them, do back off, but a giant klown descends from above and goes after the ice cream truck. I have no idea why a giant klown would hang around the spaceship’s ceiling, but just go with it.

The Terenzi’s refuse to get out of the truck because “it’s rented” as the giant klown picks it up and tosses it. The scene is shot using miniatures and forced perspective (an oldie but goodie technique used extensively in Lord of the Rings).

Will Mike and Debbie and Officer Hanson escape? Will the Terenzi’s live to finally sell their popsicles? Will more pies be thrown? I urge you to see this movie to find out.

Killer Klowns From Outer Space is an enjoyably goofy movie, and one that would do well with an effects-loaded remake or sequel.

Quick, how many times did I write Mike and Debbie? I just want to make sure you were paying attention.