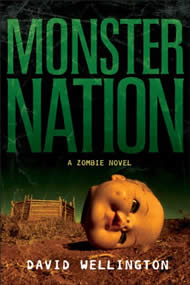 "They're coming! Barricade the door!" I threw the hammer to Zombos and held a plank of wood in place across the doorframe. "The nails, the nails! Who has the nails?" screamed Zombos as the sound of pounding increased.

We turned to Chef Machiavelli. He stood like stone with his hands over his ears. His eyes stared into oblivion. His mind had retreated to a safer place where the Food Channel was running an all-day marathon only he could see.

"Here!" shouted Pretorius, our groundskeeper, over the ever increasing pounding on the front door. He tossed over the box of nails. Both Zombos and I reached for it too soon, jammed our fingers, and sent the box flipping end over end, spilling nails out of reach.

"Oh, Lord. We are toast," sobbed Zombos. But then the pounding stopped. We breathed deeply, waiting for something else to happen. I was shaking, and Zombos showed his age more than usual.

"Who's the damn fool who put those toothbrushes into our trick or treat bags anyway?" asked Pretorius.

Zombos and I looked at each other. At the same time we uttered the same name. "Zimba." Only Zimba, Zombos' wife, would dare to commit such a heinous act on the spookiest night of the year.

"Hell of a damn thing to do," said Pretorius. "You might as well go dancing over graves or give McDonald's McDollars if you want to rile up the little monsters and invite doom." "But why did they stop?" asked Zombos.

I went to the window and slowly pushed the curtains apart. A car had stopped on the front lawn. Someone was getting out of it. Whoever it was, he did not see the silent, lurching mass of doom making its way toward him.

"Oh my God!" I realized who it was. "David Wellington just pulled up. He's here to do an interview. He doesn't see them! They're almost on top of him." I clenched the window curtains in my panic, almost ripping them from the rod. "David! David!' I yelled, pounding on the window pane to get his attention. To make him see the little terrors by night, waving their trick or treat bags angrily in the air, heading straight toward him. "No!"

They surrounded him. He tried to get back into his car, but it was too late. A few seconds stood between him and those sugar fiends insatiable hunger for their next treat.

"We've got to do something," I said. "They'll eat him alive and he's got my review copy of Vampire Zero."

"We need to draw their attention away from him. But how?" asked Zombos.

"I know where Zimba hid the candy," said Pretorius. "But someone will have to go out there."

When Pretorius returned with the candy, I steeled my nerves and stood ready by the door. Zombos counted to three, then swung it open. I breathed deeply and ran like the devil was shooting fire at my toes. David Wellington was fighting them off with my review copy of Vampire Zero. One little fiend had clamped down tight onto it, forcing him to swing both from side to side, keeping the others at bay.

"Here, look, I have candy!" All eyes turned toward me. All hands clutched at me. I tossed the candy in the air. "Catch!" The little monsters reached for the sky, ignoring us for the moment.

I threw the exhausted Wellington over my shoulders and ran back to the mansion. There was not much candy, so by the time I reached the front door, the fiends were already coming toward us fast. I pounded on the door. "Let us in! Let us in! For the love of God, Zombos, let us in!"

The door flew open and we tumbled in. Zombos slammed the door shut in time.

"What the hell was that?" asked Wellington.

"Long story," I said. "Glad you could make it." He handed me my review copy of Vampire Zero. It had little teeth marks deeply etched into one end. "So. Let me ask you a few questions." 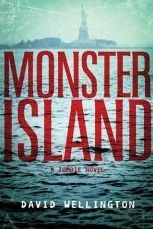 You did something unique: by serializing your first book on the web you attracted attention. What are the challenges for today's writer in a market attention-saturated six days to Sunday?

Well, it's not like there's anything new in the way of challenges. It's always been tough for writers to break into the market, and maybe even harder for established writers to keep people enthused and ready for the next book. Then there's the challenge of actually getting my daily writing done when the Internet is right there... I think the hardest part is just that so few people are reading now. But I have faith that will change. The kids who read Harry Potter, and now Twilight, are becoming life-long book lovers. There's a lot of doom and gloom in this industry but I think the future looks pretty exciting, especially for genre writers.

You had to research, write, and hit the writing pad running for each installment of your serialized blog novel. Tell us about the mechanics that allowed you to do it, and what the challenges were.

The Internet made it possible. I could do research and fact-checking at the same time I was composing--I would just switch back and forth from one window to another. I had a good long lunch break at my job, and sometimes I would stay late to work on the books, so time wasn't a major issue (I write fast, and when I'm seriously into a project not a lot can distract me). The real trick is balancing writing with life. It's bad enough when you're working on a horror novel and everywhere you go, you're thinking--how long would that chain-link fence hold the zombies back? If that basement door lead to a vampire's lair, how long would I survive if I just took a quick peak? And all the time my wife was like, "Hey, guy, I'm over here! I was telling you all about my friend's new job, and you weren't listening!" When you add on the work of putting a website together, updating it regularly, collecting, reading and responding to all the comments--it was a second full-time job. Luckily my wife was very understanding and supportive, and my friends thought it was the coolest thing they'd ever heard of.

Why did you start writing about monsters?

I just dig monsters, and always have, for as long as I can remember. Monsters are... I was going to say they're more complex than real people, but that isn't strictly true. A good monster is an abstraction of something that you find in real people. Their dark side. Their fears and profound loneliness. Their ability to lash out and hurt the people around them. You strip off all the positive, wonderful things about people, refine what's left to its purest essence, and you've got a monster. But where they go from there is what's interesting to me. Monsters have their own agendas, their own needs and desires that don't line up with what society, or the authorities, or what nature itself wants from them. They don't have to play by the rules, which makes them fun to write about.

You mentioned Ramsey Campbell, one of my favorite authors, in an interview. Why should a reader today check out his work? Which other authors do you like, either horror or non-horror, and why?

Ramsey Campbell is a genius, and there's no question in my mind he's the best living horror author. He takes all our usual out-there stuff, monsters and other dimensions and crazed psycho killers and the like, and makes them real. He has a way of describing things not in the clearest way possible, or the most arty, but in the way that you or I would actually experience them--with our faulty five senses, with our extra senses of dread and self-awareness and fear. His work is often terrifying because you identify so closely with the characters--and the ghosts!--that you can't get out of the story. As far as other authors I can recommend--a lot of my favorite writers working today are science fiction authors, like Richard K. Morgan and Iain Banks. In horror I can suggest that anyone pick up Melanie Tem and Kathe Koja's books. They've both gone on to other things but their horror novels always blew me away. In more recent news, Sarah Langan has repeatedly amazed me with her books. I could mention a hundred other people, like Joe R. Lansdale and F. Paul Wilson, but they need little introduction from me.

Okay, you have tackled zombies, now vampires, so who would win in a steel cage match?

One vampire can take down a whole crowd of zombies--for a while. They're a dozen times faster, stronger, and more lethal. The only real advantage the zombies have is in their numbers. You get enough zombies together and they can eventually take down anything.

When I first started reading adult books, when I was nine or ten, I always thought "that was a cool story, but I could do better". It turned out I was wrong--I had no idea what made a good book when I was that age!--but I kept trying. I don't really remember a time when I didn't want to write.

What does the future hold for David Wellington and his writing?

There will be another vampire book coming out next year. Then I'm doing a couple of werewolf novels--you know, just to expand my range!

What is one question you are dying to be asked and what's your answer?

Why is a raven like a writing desk? It's a riddle from Alice in Wonderland. Lewis Carroll failed to answer it, except with further absurdities. Yet when I read it the first time I knew the answer immediately. It turns out I wasn't the first to get it, but I'm still proud of myself for that one. The answer, of course, is, "Poe wrote on both of them."