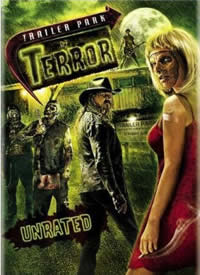 Zombos Says: Good (but not my cup of tea)

From the case files of the League of Reluctant Reviewers comes this trashy horror, based on the Imperium Comics series, that will make you think twice before eating beef jerky ever again.

I remember it all quite well.

It came uninvited in a small brown envelope mixed in with the mail, on a day when the leaves tousled angrily on the limbs of dying trees, fighting against their inevitable descent to lesser heights of vibrancy. An oily, pipe smoke fog, so thick it choked the throat and chilled the soul, gamboled in the deserted streets, stirred by winds playfully knocking off the hats of the few brave passersby hurrying along the quiet streets.

Darkness had come early this unusual day in October. I twirled my scarf tighter to ward off the dampness. Or was it something else that made me shake uncontrollably as I tapped the brass flamingo knocker against the massive oak door of 999 Transient Street.

He took my raincoat and scarf as we walked toward the Champagne Room, so named because of the pale yellow light that reflected in sparkling shimmers from its large Waterford crystal chandelier. Chalmers reached for the small brown envelope. I instinctively held it tighter, though I was not sure why. He smiled and went to hang up my coat.

I entered the room.

"Punctual as usual," said the unseen man sitting in the Chippendale wing chair facing the fireplace. A lively fire blazed on the grate.

"Let me see it," he said in a soothing voice.

Chalmers appeared. "Your drink is ready."

"Thank you," I said and followed Chalmers to another, smaller room, where a polished Stiegel glass, filled with lightly chilled sherry, waited for me. The cheery, paisley-tailed peacocks embroidered into the linen upholstery of the settee I nestled into were very soothing, and the plump cushioned seat, along with the sherry, had my cheeks on both ends glowing with warmth.

I drifted into reverie while the League of Reluctant Reviewers did what few could do or care to; there but for the grace of god and all that as John Bradford would say. Within a short time they would have the review done to a crisp.

Done to a crisp. The very thought made me shudder.

When Norma (Nichole Hiltz) yearns for life away from the grungy trailer park she’s trapped in, she’s spiritually crushed when her new boyfriend is impaled on a fence by her redneck neighbors. She gets even after meeting Old Scratch (Trace Adkins) who gives her a shotgun to blast away her troubles. Where the Devil goes, damnation follows, and both she and Tophet Meadows, the trailer park she can never leave now, wait through the years for stereotypical victims, sent down stormy bad roads by grizzled, rustic strangers you would have to be a fool to listen to.

A van full of dead-teens-walking is provided courtesy of Vertical Ministries youth rescue service. After stopping at the local yokel diner and following the advice of de facto grizzled, rustic stranger (Tracey Walter, no less), Pastor Lewis (Matthew Del Negro) and his misfit flock collide with a derelict truck in front of Tophet Meadows. Being a certified, script-necessary dead zone for cell phones, they can’t call for help, so they head toward the cheerily-lit mobile homes in the trailer park.

Cursed Norma puts on her happy face—she really does need to—and greets them with hard liquor and a hard luck story of how her mother died in front of her.

After sending the kids off to bed and doom, she gives a rousing private sermon for Pastor Lewis. A flashback about her mother puts the brakes on the wicked-fun energy of the story, which comes to a full stop by the time our wanderlust teens are deep-fried, dismembered, and deboned.

Unlike Two Thousand Maniacs!'s absurd, quickly executed viciousness by somewhat reluctant townsfolk, each scene of depraved cruelty here is overlong and disturbingly, gorily, serious in its attention to misery, easily outdoing scenes fit for an extended version of Hostel, not a satirical take on retro drive-in splatter.

Norma is joined in the mayhem by the same yahoos she shotgunned years before—misery fosters miserable company in horror movies I guess.

They’ve not aged as well as she has: layers of ghoulish EC comics-styled decay makeup indicate their dispositions; one even uses duct tape to hold himself together after being blown up, but this kidding is kicked aside by unpleasant torture horror, ill-timed and  unnecessary exposition, and a long song sung by a guitar-strumming, pot-smoking cadaver. The acting, aside from the de rigueur stupidity of the victims, sustains a moderate level of terror, or disgust, depending on how you take it.

The beef jerky scene stands out as an example of the most brutally-rendered and disgusting excesses today’s horror movies are prone to, a seriously disturbing gore-fest not for the squeamish. If stark close-ups of slow flesh peeling don’t make you upchuck, by the time you get to the human french fry dunk into a bathtub of boiling oil, you’ll either be gagging or nervously giggling to lighten the heaviness.

The troubled teens—now in trouble with a capital T—pair off with the decaying trailer trash still living in the park’s mobile homes, and are scratched off the hit list, one by one.

Tiffany (Stefanie Black) goes tripping and runs afoul of Roach (Myk Watford), who saws off one of her arms for using his stash. When she comes down from her trip and back to one-armed reality, she runs screaming into the mother of trailer trash monstrosities, the repulsively grotund 'where's my meat?' Larlene (Trisha Rae Stahl). Scratch one 'needs some salt' Tiffany off the list.

The only victim to put up a fight is goth-minded Bridget (Jeanette Brox), who finds herself in a demolition derby car crunch when she tries to escape.

I recommend you watch the R-rated version first, sort of like dipping your feet in the pool before jumping in head first. Then after you warm up a bit you can try the unrated version.

Do not plan on eating anything before or after if you do.

Better yet, invite a bunch of friends over and hand out beef jerky. Give a prize to the last person who can stomach it: the beef jerky and the movie.