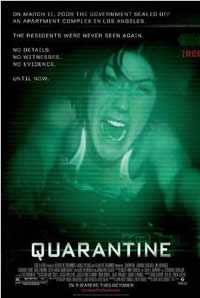 Television reporter Angela Vidal's assignment, to tag along with the night shift of a Los Angeles fire station, starts out as fluff. Firefighters Jake and Fletcher kid around as Angela's cameraman, Scott, films the banter through his lens. We get a tour of the station house, the locker room, the mess hall, and an explanation for why Dalmatians and firefighters go together like smoke and fire. We even get to see Angela slide down the firepole.

In fact, everything we see and hear is through Scott's camera, making Quarantine another horror movie not for the faint of eyesight. Although more Diary of the Dead steady and less shaky-waky than Cloverfield, there are times when our view is intentionally obstructed, or pointed toward the floor, or plunged in darkness, which will either frustrate you or leave you with badly-chewed fingernails.

When the emergency medical call comes in (we are told firefighters handle more medical calls than fires), Angela, Scott, and the firefighters rush to an apartment building where a woman's screams have rattled the tenant's nerves. The building is filled with dark interiors and concerned tenants. Entering her apartment, our view is blocked until Scott can get his camera in front of the police officers and the firefighters. What confronts them is Mrs. Espinoza, foaming at the mouth, incoherent, and much to their dismay, a lot stronger than she should be. She also has a hearty appetite, which in this case is not a good thing for everyone else. Here is where the carefully built-up fluff gives way to terror with a series of escalating events pushing the tension level up while pulling everyone's chances for survival down.

In this English version of the Spanish movie [Rec], Angela (Jennifer Carpenter) and Scott (Steve Harris) keep recording events as their light-hearted time-filler turns from feature to hard news, until the struggle to stay alive takes precedence. In desperation, Scott uses the camera as a weapon, giving us a head-bludgeoning eyeful filled with bloody spatters on the lens.He wipes the lens clean, but you can see his nerves are raw.

When the Center for Disease Control (CDC) seals up the building good and tight, and military sharpshooters aim for anything that tries to leave through windows or doors, the apartment house becomes a dark warren of fear. Cell phone communication is blocked, and even cable is cut off. It is that bad. 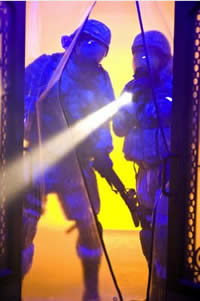 "Wake me up when you get to the point," said Zombos, closing his eyes.

"Shush, will you, I'm trying to finish this review." I ignored his feigned snoring for as long as I could. "Alright, I'll bite, have your say." I stopped typing on my laptop, sat back, and waited for his pearls of wisdom.

"The drill." He folded his arms in satisfaction. He was referring, of course, to the white, handheld drill used to extract a sample of brain tissue from one of the infected people. Director John Erick Dowdle keeps Scott's camera lens lingering on this discomfort-inducing sight in a way that fortifies the illusion it is really being filmed by a news cameraman and not a movie production crew. First a light spray of blood as the drill punctures the head, then the grinding sound of bone and tissue and whirring drill bit pushed in all the way; it is all matter of fact as Dowdle--through Scott's lens--films it, which actually intensifies the effect without resorting to copious amounts of blood and gore. Another stomach-churning closeup is shown when an infected firefighter, turned rabid, lurches forward on the broken tibia and fibula in his left leg. Again, Scott's closeup of the wound, with both cracked and broken exposed bones bowing under the weight, would be sickening except for Scott's this is impossible news-minded zoom-in.

"Okay, I'll admit that's a good point to bring up," I admitted.

Zombos nodded his head. "And do no forget the locked apartment on the top floor, where Angela and Scott run to when all hell breaks loose."

By this time in the film, the contagion has spread despite efforts to contain it, the CDC agents have entered and made matters worse, and Angela and Scott are running for their lives. They enter an apartment on the top floor and soon discover the source of the contagion, along with something else lurking in the apartment. Actually two something else's. Scott is forced to switch his camera to night vision, an occurrence we see in every shot-from-hand-held-camera-perspective movie it seems. It works well here because Dowdle keeps moving Scott's camera view between the thing foraging in the apartment and Angela's total melt-down into quivering jelly. Back and forth, the camera's night vision captures Angela's struggle to keep quiet through her fear, then a swing around the room to see where the creature has gotten to, then another closeup of Angela barely able to contain herself: you can picture a profusely sweating Scott holding his camera while trying to keep it all together--stay as quiet as possible, keep Angela from giving their presence away, and find a way out for both of them.Unfortunately the trailer for the film shows the ending shot, so much of the suspense is lost if you have seen the trailer.

Quarantine is a surprisingly good horror film. Surprising because it uses the now over-used hey what's on this video camera we found scenario in a way that actually does make sense, and because it keeps the illusion of a news cameraman recording these events intact. By not splashing the action with overdone gore and grue, the "reality" within the film is maintained and made more intense by good acting and careful direction that keeps it serious once we leave the firehouse.

"All the tenants were forced to stay in the lobby. Staying together as a group did not help; it made matters worse, actually. Maybe going it alone in a horror film, sometimes, is better. Sort of ironic, eh?

I agree, excelent use of this camra technique. Keeps your eyes looking for that something that will pop out. Very much like the style in Cloverfield but with less headaches.
Personal favorite scene: When the camra man beats down the infected woman with the camra.

Can't wait to see this one. It looks like a lot of "bloody" fun.

I must say. this movie looks fucking stupid! I will pass.

Great movie - I haven't seen the original but I really loved this one and its unhappy but realistic ending.

And for all those Saw fans out there - this is another movie that works because of all the things you don't see - lots of the shots are dark and out of focus and it keeps you on the edge of your seat wondering and your imagination going creating a much more horrifying experience.