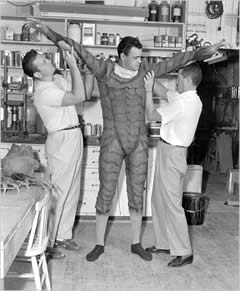 Yes, there was Ricou Browning for the underwater scenes and suit performers on land who followed, notably Tom Hennesy and Don Magowan, but for millions of “creature feature” fans, Benjamin F. Chapman, Jr. was the “reel” Gill Man from the original 1954 classic, CREATURE FROM THE BLACK LAGOON.  On February 21, he sadly passed away in Hawaii at the age of 79.

Certainly, the Bay Area native had the advantage of being a player on the Universal lot in the early 1950s and his 6’5” size and relative youth – in his late 20s – made him ideal for the part of the creature who stalks North American invaders of his native Amazonian lagoon in the beloved film, originally filmed in 3D.  But Chapman brought a grace and several nuances to the performance of the first Gill Man, which made him one of the great icons in the Universal Studios canon of classic monsters.

In preparations for the creation of the titular character, Universal’s makeup department, headed by Bud Westmore, cast Chapman’s and Browning’s various body parts to fabricate the Gill Man costume, which was realized in foam rubber. Different sections such as torso, arms and legs, were taken off of impressions of Chapman’s body, then the team, including stalwarts such as Tom Case and Jack Kevan, created individual sections. The memorable Gill Man face was designed by artist Milicent Patrick and sculpted by Chris Mueller. Chapman was suited up on a daily basis by Bob Dawn for his exterior scenes, filmed on Universal’s backlot. Footage of Browning in a duplicate suit was achieved on location in Florida. 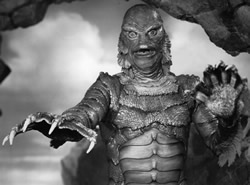 Though Chapman never played the Gill Man in the sequels, he did reprise the creature for the Colgate Comedy Hour’s TV episode with Abbott and Costello, a program in which they comedy duo first encounters Glenn Strange as the Frankenstein Monster, then reveals the Gill Man to the public for the first time anywhere. Though only three films all in, the CREATURE FROM THE BLACK LAGOON series rates with any of Universal’s monsters from the 1930s and 1940s for sheer fan adulation.

Chapman had long been retired from acting but made regular personal appearances at conventions and autograph signings over the years. He maintained a website, The-Reelgillman.com, and was the focus of fans’ love since magazines such as Famous Monsters of Filmland made the character popular again for new generations of fans in the 1960s and 1970s. Always good natured and happy to talk about his 1953-1954 Gill Man performances, Chapman will be fondly remembered by fans of the original film and all who had met him since.

Special thanks to Dan Roebuck plus Sam Borowski & Matthew Crick, creators of the documentary CREATURE FEATURE: 50 YEARS OF THE GILL MAN

Posted at 08:26 AM in Universal Monsters | Permalink