« Spookies (1987) The Other Plan 9 | Main | Interview: Count Gore De Vol Still Counting After All These Years » 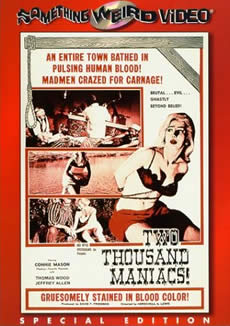 "He passed out!" she  said. "I think he was watching Two Thousand Maniacs! when he fainted."

"Here, then, give me the smelling salts. And stop bending over him like that. Give him some air."

I opened my eyes. Zombos' face was upside down now, leering at me with its stern, accusatory eyes. I wished him to go away, too.

"You ninny," he said, holding the smelling salts under my nose. "I do not know why you insist on putting yourself through these exercises in self-punishment. If you do not want to see Saw IV, then just do not see it."

He helped me to my feet, though I was still a bit wobbly.

"I thought if I prepared myself by watching one of the earliest gore movies it would help desensitize me. I have a responsibility to our readers," I explained.

"Oh, I think the five of them really do not want to see Saw IV, either," joked Zombos. At least I hope he was joking. "How far did you get into Herschell Gordon Lewis' movie?"

"Up to the axe scene. When she got her thumb cut off I started getting woozy. The axe scene did me in after that." I sipped the glass of Glen Caren Glenor handed to me. There's nothing like a vatted malt whiskey to bring back the color in your cheeks; bright red color, like the color of freshly spilled blood.

And there's lots of bright 1960s-colored blood in Two Thousand Maniacs!, the second movie in the Godfather of Gore's blood trilogy that ushered in the splatter-horror genre to an eager drive-in movie audience. Dipping once too often into the nudie-cutie and exploitation well, Lewis and his partner David Friedman searched for their next commercial gusher. They found it in colorized gore, delivered with manic glee, cheap setups, and lingering eyefuls.

Perhaps it's the gleefully sadistic way in which the Brigadoon-like southern townspeople of Pleasant Valley go about torturing and killing the slow-to-grasp-the-situation northerners, or maybe it's the hokey acting and poor direction slamming against the energetically strummed banjo songs, sung by the strolling bluegrass trio as the entire town celebrates its revenge-fueled centennial. Whatever the reasons, the movie is still a wild southern fried terror ride that revels in its nastiness while cheekily grinning from ear to ear. The gore is mild compared to today's more graphic, mechanically-oriented, dismembering and mashing appliances, but a simple knife, or axe, or sharp nail-lined barrel always provides a homey touch of stark horror whimsy to any victimization.

Every hundred years the town of Pleasant Valley comes to life, looking for a little cold comfort by revenging its destruction on those damn Yankees that decimated it during the civil war. Since revenge mostly involves innocent people in horror movies—dumb, innocent people—and sometimes those who instigated the problem in the first place, the townsfolk detour a few northern-born passersby off the highway and into the town as centennial guests of honor.

A carload of two bickering couples—bickering couples are a staple in horror movies, too—are the first to be invited to the barbecue. The couple with extra-kinky shenanigans in mind—my, this one is full of staples, isn’t it?—are the first to succumb to the town's madness. They each go off looking for a tryst with a local yokel, but find terror instead.

By the pricking of her thumb, she loses a digit with more to come.

In a violent scene that holds intensity with its sudden brutality, the hot-to-trot blond gets her thumb maliciously cut off by the town's dashing, rope-belted, blue jeans hunk. With blood spilling all over the place, she's hustled into the "doctor's" office, where quick surgery with an axe really makes a mess of things. Lewis' direction throughout this unpleasant business is over the top. The contradiction between the laughing good-ol' boys hovering over the bleeding, shocked, and dismembered woman is held in the camera's eye long enough to register a disturbing absurdity and disgust, delivering a grindhouse-styled wallop to the senses even a Saw-jaded fan could appreciate.

Her husband doesn't fare all that well, either. After waking from a drunken stupor, he finds himself with a hangover and tied to four horses pointed in different directions. Lewis tones down the shock by cutting away when the horses prance off, only showing a bloody limb dragged over the ground afterwards. For a moment, his camera dwells on the unhappy looks of the spectators, realizing the horror of what they've just done; but only for a moment.

Lewis' pièce de résistance is a barrel rolling contest with a nail-barrel. Forced into a gaily-colored barrel, the male half of our second unfortunate couple is perturbed when the mayor starts pounding large sharp nails into it, leaving the prickly points exposed inside the barrel. A short kick down a long hill leaves one more brightly-colored victim dressed in blood-red as the townspeople cheer.

The third couple fares better. A hitchhiking teacher and the woman who picked him up catch on pretty quickly that not all's fun and games in Pleasant Valley. When communication to the outside world is cut off, the teacher realizes it's time to hightail it out of there. The only obstacle to overcome is finding the car key and getting past Billy the kid.

Billy (Vincent Santo), whose favorite pastime is tying mini-nooses to strangle cats with, knows where the car key is, but he drives a hard bargain to fess up. Watching Billy, I couldn't shake the creepy feeling he looked awfully like Billy the Puppet. Just paint two large red targets on his cheeks, darken his hair, stick him on a tricycle, and you'd swear he looks just like him. Or maybe it's just me.

Lewis' budget ($65K in 1960s dollars) for Two Thousand Maniacs! was higher than his more explicit gore-fests in the trilogy, Blood Feast and Color Me Blood Red, allowing him to devote more time to the story and the setups for each gore-effect. Ironically, this may have hurt his directorial style more than helped, but Maniacs! holds up well primarily because of its rough edges.

With his help, and three glasses of Glen Caren, I had watched Two Thousand Maniacs! in its entirety.

"Good, then perhaps we should move you up to The Wizard of Gore. Lewis really piles on the bloody gore as a maniac magician's illusions leave his volunteers in pieces. Good lord, not again. Glenor! Quick! Bring the smelling salts!”