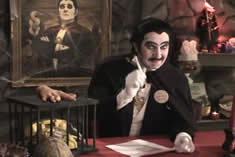 Dick Dyszel's undying alter-ego, Count Gore De Vol, haunted Washington DC's television screens from 1973 to 1987 as TV horror host for station WDCA. Beginning as the character M.T. Graves on the Bozo the Clown show, he parlayed his monstrous likability into hosting his own popular program, Creature Feature. His satirical approach to politics and the sexual revolution kept his show fresh and on the air until all local programming was canceled by the new owners of the station.

The unstoppable count rose from the grave once more, becoming the first Internet Horror Host to haunt the flickering computer screens, entertaining his devoted, and now international, fans every week.

While not putting together his weekly show, you can find him at conventions, hosting horror film festivals, and doing movies. He is featured in American Scary, a documentary devoted to the horror host phenomenon, and appears as The Narrator in Midnight Syndicate's The Dead Matter.

We got a hold of Dick Dyszel and didn't let go until he answered a few questions for your edification pleasure.

What keeps you going after all these wonderful years of horror hosting on television and the Internet?

EGO! I must be the center of the universe....or at least the center of my own modest web program. I, like most actors, love the attention.....particularly when you can do it your way.

Tell us about your early days in the television industry. What was it like?

I could write a book about this...and actually got one started before I lost interest. I was very fortunate in starting my TV career at a brand new UHF station in Paducah, Kentucky. Because we had a small staff, but great facilities, everyone got to do everything. I took advantage of the situation, which led to many 100 hour work weeks. But I also came away with a huge amount of practical knowledge. This allowed me to get off to a fast start in Washington. You have to understand that the 70's and 80’s were the last years of creative local entertainment programming on TV. It was a great time to be alive and in the business.

How did M.T. Graves evolve into Count Gore De Vol?

The general manager wanted a name change, or he wouldn’t approve the show. He said he wanted something “gory” so that’s what we gave him.

How much of Dick Dyszel's personality is part of the Count's?

I’ve been told that Gore is a secret extension of Dick’s personality. Who am I to argue with that?

You are the first horror host to bring his show to the Internet, back in 1998. Can you tell us what inspired you to do that?

In 1987, when I left Channel 20 in Washington, I was really burned out.  I took ten years off, moved to Chicago and discovered the Internet. After a couple of years of people finding me through my DJ site, and encouraging me to bring Gore back, I got the itch to become the first horror host of the Internet. I learned how to do HTML, put the first weekly show on July 11, 1998 and the rest is history. So, I guess it’s the fans that inspired me!

Do you find you have much more creative freedom doing shows on the Internet as opposed to television?

The difference is not as much as you might suspect. At Channel 20 I had a tremendous amount of creative freedom. Heck, my program director used to say, “I don’t want to know what you’re doing!” So, I honored his request! But I did have to deal with other folks picking movies, scheduling production sessions and such. Now, I do all that. It’s a bit more freedom, but a whole lot more responsibility.

What trials, tribulations, and triumphs did you encounter when doing your Internet horror show?

The biggest trials have to do with evolving the program as technology evolves. When we first started we couldn’t stream video because everyone had 28.8 dial-up connections, so we streamed audio. Then came small screen video, then larger and larger and now certain video is streamed at full screen! Next will be high definition. But the worry is timing. When is the technology matured enough and wide enough spread to justify the change.

The triumphs include continued support from a great group of contributors! I could NOT do this weekly web program without their contributions. My longest running contributor is J.L. Comeau, The TombKeeper, who interviews authors and reviews books.

My newest contributor is Duncan Meerod, our paranormal investigator. Other triumphs include a Rondo Award win in 2004 and runner up finishes in 2005 and 2006. But the biggest triumphs have to deal with fan support from not only around the country....but around the world!

Speaking of the paranormal, do you believe in it? and if so, any firsthand experiences?

I have never had a paranormal experience and that really bothers me. I've been in one situation that supposedly was "real" but I quickly saw through the hoax. I someday hope to have such an experience...maybe even on video tape!

How do you keep coming up with ideas for your shows?

Magic! And I’m serious....I have no idea where most of the ideas come from. I do look at the films, the stars, the plots, the recent headlines, Washington politics and how I feel that day! Somehow it all comes together once the camera starts recording.....most of the time.

What advice can you give us on becoming a successful horror host and staying that way?

The best advice it to keep your expectations reasonable and don’t be afraid of new things. It also helps to love what you do! Right now the biggest decision most new hosts have to make is whether to go cable access or Internet! They both have advantages, but if you’re totally new to TV, I think it’s incredibly valuable to get that experience at a cable access studio, but not be afraid to make the leap to Internet.

You've done quite a few interviews with notable personalities: which interviews did you enjoy doing the most and why?

I always enjoy interviewing Dee Wallace Stone...she’s just wonderful. In that same category I would put Brinke Stevens, Reggie Bannister, Bruce Campbell, Lynn Lowery and author David Weber. The reason they are so wonderful is that they are willing to open up to questions based on their own answers. You never know where that will take you, but it breaks the standard response interview. 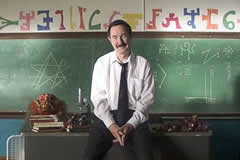 Tell us about your work on The Dead Matter. What was the experience like being "The Narrator?"

When Edward Douglas of Midnight Syndicate fame asked me to be in the film...not as Gore, but acting as another character, I couldn't say no. After I read the script, I became excited. "The Narrator" is actually a small role that's part of a dream-like sequence. I do both narration and portray a sinister teacher on camera. The experience of shooting on film with a full professional crew was fabulous. I've known Edward through a number of interviews for about 6 years. I knew there was a movie concept perking on the back burner and was thrilled to be part of it. Now we just need for it to be a huge financial success.

What are your favorite and least favorite horror films?

What's the one question you would love to be asked, and what's your answer?

I used to ask this question and never got any good answers, but on some significant thought, I don’t have a good answer (or question) either.