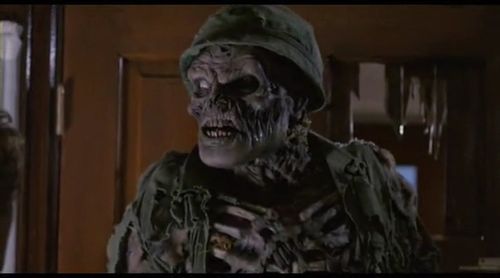 "I tell you I smell popcorn," said Curly Joe. We had been walking for some time without any luck finding Zombos or Chef Machiavelli.

Curly Joe started sniffing the wall. "Over here. It's comin’ from this crack in tha brick."

We leaned against the brick wall to get a better whiff. It gave way. We tumbled into a brightly lit room filled with ornate, comfortable furniture and the smell of freshly popped popcorn. Zombos was sitting in the corner with his feet resting in a large basin of water and Chef Machiavelli stood by an antique coal stove applying liberal amounts of salt to a big bowl of steaming popcorn. Puffing away at a church warden, a little, red-bearded, fellow watched us as we pulled ourselves up off the ground. He stood up from his overstuffed armchair.

"You!" said Curly Joe. "That's tha little creep I was arguin’ with."

"Oh, Sebastien's all right," said Zombos. "He was quite happy to get his tap dancing shoes back. They took me right to him, actually, and not soon enough, I can tell you."

"My wife, god-bless her, hates my tap-tap-tapping, so she hid my pride and joys. I've spent the year searching for them. They missed me, too," said Sebastien, picking up his shoes by the chair. They clicked together in agreement.

I stared at our diminutive host. "Forgive me for asking, but—"

"I know, I know, Sebastien's not an Irish name and I don't have an accent," he said. "I grew up in France. Long story. You've been watching too many Barry Fitzgerald movies, I take it."

Chef Machiavelli brought the popcorn over.

"This is wonderful. I've not had this much company in a long time. My wife hates visitors. I only married her because she looks and talks like Barbara Steele, my favorite horror movie actor," he sighed.

"So she's the one I heard callin’ ta me?" said Curly Joe.

"Yes, she's a bit of a flirt, but I still love her. Sorry I conked you one, but she gets me so jealous and angry when she's off and dallying around. But she's away to her mom's—nasty witch there, too—and I've got guests and popcorn and this new LED TV is hot to trot. "

"Do you get cable or satellite down here," I asked.

"Hey, you've got a lot of DVDs here," said Curly Joe, looking over the titles. "Haven't seen this one in ages." He held up House.

"Ah, you've found my real pot of gold you have. Yes, I can't get enough DVDs. Let's watch it, then," said Sebastien.

In Steve Miner's wickedly quirky House, William Katt (Greatest American Hero) plays Roger Cobb, a Valium pill-popping, flashback-plagued, Vietnam veteran and popular author who lost his son and separated from his wife (Kay Lenz). He's suffering from writer's block trying to finish his book, One Man's Story: A Personal Account of the Vietnam War. With his agent on his back, and unresolved conflicts simmering in his subconscious, he's guilt-ridden and close to a nervous breakdown. So what happened in Vietnam, making it difficult for him to write or get on with his life? The answer lurks in the house he inherits after his eccentric aunt hangs herself. The house is also where his son disappeared from the center of the swimming pool years before.

Unlike the current trendy taste for horror being darker, queasier, and ichor-drenched, Mac Ahlberg, who did the cinematography for Re-animator and From Beyond, uses a lighter hand here and bathes the house’s oddball rooms in cheery colors, giving them an apple pie atmosphere until the clock strikes midnight, when Cobb’s nightmares really do come out of the closet in the form of the War Demon: a fused amalgam of napalmed bodies.

Something not quite right about the house is hinted at early when the grocery delivery kid enters, hears odd noises coming from upstairs, and goes to investigate. We follow him through the house, seeing the quaint furnishings and old-fashioned rooms bathed in sunlight. Wait a minute. Those Night Gallery-esque paintings on the walls, painted by Cobb's Aunt, don't quite match the decor. She’s a bit of an oddball, apparently, judging by those paintings. She could also do a mean Grand Mama from the Addams Family for Halloween by the look of her, too.

With her departure comes Cobb's arrival to the place he last saw his son. The police never bought Cobb's bizarre explanation of how his son disappeared. Should we? Is Cobb suffering from delusions, or is there something abnormal about the house? If you’ve read William Hope Hodgson's House on the Borderland, you already know the answer. The first night his Aunt pays him a visit to warn him about how the house likes to play tricks on people. But is it really her or the house playing tricks? It's not merely haunted, it's possessed; and it stands on the crossroads to the mundane and supernatural worlds.

The following morning he meets his pesky neighbor, Harold (George Wendt from TV’s Cheers). Harold recognizes him, chats about his books, and finds it difficult to stay. He brings over the brewskies, begins to worry about Cobb’s mental health, and calls Cobb’s wife out of concern. There’s one especially traumatizing event buried among the others plaguing Cobb, and it’s not his missing son. Working it out involves dressing in army fatigues and readying lights and cameras to confront the War Demon. And more grotesqueries put in appearances to bedevil Cobb, even sharp lawn and garden tools take aim in his direction, escalating his daymare encounters.

The foam and polyurethane nightmares created by James Cummins are similar to his comically designed monsters in The Boneyard, but here they’re an advantage: they meld an off-beat, playful, gruesomeness to match Cobb’s mood and the electric-koolaid-acid-trip tone of the movie. In one surreal encounter, Cobb tries to bury a headless, but still moving, purple Morlock-looking monster in his backyard, only to be interrupted by yet another neighbor taking an uninvited dip in his swimming pool. She ingratiates herself while he quietly steps on the monster's dismembered hand before it can grab her bare ankle. He finally gets rid of her and hacks up the monster, burying the pieces to the tune of Linda Ronstadt's You're No Good.

She shows up later that night with her son in tow, begging him to babysit. He declines the offer until he discovers the pesky purple monster’s hand is back and holding fast to the boy’s shirt. Is he hallucinating? She hurries to her date and he eventually manages to flush the 5-fingered-terror down the toilet.

Damned if I would sit on that bowl again. Ever.

Another misadventure begins when troll-like creatures snatch the boy up the chimney. Trying to get a handle on all these bizarre happenings, Cobb coerces Harold into joining him in a midnight romp with the War Demon. Harold, naturally, isn't much help, and Cobb gets sucked into the closet and back in time to when he was in Vietnam. It’s there we learn the reason for Cobb's flashbacks as he confronts Big Ben, played by six foot, nine-inch Richard Moll (TV's Night Court).

But what does Cobb's missing son have to do with all this?

It takes a journey through the bathroom medicine cabinet to find out. In a Lovecraftian-esque encounter with a stop-motion winged nightmare and other nasties, Cobb must fight for answers and to save himself from guilt and an EC Comics-looking dead Big Ben who is out for his blood.

Will Cobb find his son and stop the nightmare? Or will Big Ben finally get the payback he's been looking for all these years? Don't let the second and third story sequels fool you; they don’t continue the storyline started in House. It begins and ends here, although House II extends the weirdness. House is one of those 1980s B-Movies that still vibrantly remains a quirky excursion into horror-comedy. It has top-notch actors, fast pacing, and classic stop-motion and polyurethane monsters to sell its off-beat, dry humor terrors.

This is one house you should rent.

Does it rain in Cincinnati? (the answer is yes!)

Oh how I love these scary mentions and dangerous things that always jump from around the corner- by your blog post I can tell you are a fan yourself :)

Aside from possibly Netflix, I don't think it's available in the public domain.

where can i watch this movie online?

Rippin,
I loved House 2: The Second Story also. While it really didn't have anything to do with House 1, it's still a hoot. House still stands as a solid entry in fantasy-horror. Great acting, super actors, and a fun, creepy script.

"House" is a top-ten favorite in my family! My siblings and I have watched this countless times! Awesome!