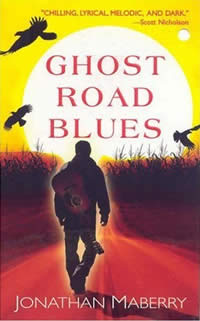 Something wicked refuses to leave Pine Deep, the small town in Jonathan Maberry's Ghost Road Blues. It took up residence years before and simply refuses to leave, or die. Back then, the townspeople started dying instead, and only one person, the Bone Man, could stop it. But he was stopped, too, before he could complete his mission.  And now it's waited long enough. People are dying again.

I stopped typing and looked up from my laptop. "What? Who said that?"

"Me, the something wicked you just wrote about."

I froze for a moment. "I've got to stop doing these all-night reviews," I said to myself. "Damn Dunkin' Donuts had to stop making Dunkachinos, too. I can't do this without two or three, at least. What do I know about Blues mythology, anyway? And I've got to stop talking to myself."

"Iloz Zoc, move your left hand. I can't see what you're writing."

I moved my left hand.

"Now hold on there, old boy. It'd be better if you were a pillar of salt, instead," said another voice.

I looked up. Standing in my attic office was a tall, thin man.  "Wait, I know you. There's a hint of grave dirt and tombstone dust about you. And that guitar strung across your back is a dead giveaway. You're the Bone Man, right?"

He bowed slightly and smiled. "In the flesh; well, close enough."

"Now hold on, there, little reviewer, it's somethin' we got to do. Somethin' you got to do." He pulled the guitar over his head and started to play.

"Oh, please, the Blues isn't going to stop me this time and you know it," said the voice.

"Guys. Okay, maybe I'm hallucinating, maybe not. But since I've got the two of you here, I can use your help in this review. Hey, is Crow available?"

"No, he's off doing a book signing in Toledo," the Bone Man said.

"What about Mayor Terry?"

"Ditto in Peoria. Maberry kept the cushy signings for himself. "

"Alright, then." I opened my laptop. The Bone Man tuned his guitar. "Let's do it."

Ghost Road Blues is the first salvo in Maberry's trilogy for Pine Deep's predicament with an evil that won't die. It starts off with a frightening haunted hayride—Pine Deep's big attraction—and ends with a small battle won, but the war is just starting. In between the beginning and the ending, you will find it hard to put down, even though it's over four hundred pages, as Maberry ties events seamlessly together by using simple actions to bridge them, keeping the tension moving at a brisk pace while still moving forward and backward in the narrative to build his characters.

The troubles for Pine Deep began thirty years before. Like the foreboding 1692 wheat blight in Salem Massachusetts, Pine Deep's cornfields are suffering and failing while a serial killer is murdering townspeople left and right; until the Bone Man stops the murderer in a bloody and muddy fight that nearly finishes him, too.

"I had nothing to do with that blight," the voice said.

But that serial killer, Griswold, was not wholly human, and that inhuman part of him has festered and seeped into Pine Deep's cornfields, quietly growing stronger as it lay in Dark Hollow, in the ooze and slime of the marsh under the full moon all those years, patiently waiting to return. There are some in Pine Deep that look forward to that return; his followers, human monsters that go about their daily lives in quiet anticipation, just as the corn blight returns, forboding the hellish nightmare to come.

Tow-Truck Eddie is one of those followers, but he's nothing compared to Vic Wingate. Vic's a special kind of monster; a wife-beater and bully who Maberry writes too vividly, too real. Tow-Truck Eddie is just a psychotic killer who thinks he's the sword of God. He pales in comparison to Vic.

For the survivors of the horror that came and went thirty years ago, that uneasy feeling of dread has returned. Malcolm Crow remembers it all too well. Now forty, he's still powerful for a small guy, and takes on Karl Ruger, another sociopath soon to be in the service of Griswold, in a bloody and muddy fight that drives Ruger exactly where Griswold wanted him all along: Dark Hollow.

Before that happens, though, Crow is simply the proud owner of the local skulls, comics, and rubber body parts gift shop in town; but when Mayor Terry puts him back on active police duty to help with mad-dog Ruger's flight into Pine Deep, you know he's someone special. His main squeeze, Val Guthrie, thinks he's special, too. Val is also strong, and proves it when Ruger invades her home and starts beating up and terrorizing her family. In a tense series of pages, Maberry shows quite clearly why Ruger is feared and hunted by the police--and the perfect vessel for Griswold's plan.

As Pine Deep's normally quiet existence is shaken, Mayor Terry has his own problems to deal with. He's worried that his local arm of the law can't handle Ruger; which is why he called in Crow. But that's not his only worry. His medication doesn't seem to help anymore, and his dead sister keeps popping up to tell him something he doesn't want to hear.

Young Iron Mike Sweeney has his own problems to deal with, too. They start with the name of Vic. Iron Mike lives under Vic's roof, and Vic beats him almost daily—viciously, but deep down, Vic is afraid of him? He's a threat to Griswold's plan, but how? Each time Vic lashes out at him, you feel the sting and taste the salty blood. It's an uncomfortable feeling, conveyed in simple words and straightforward description of action.

The Bone Man knows that Iron Mike is special, just like Crow and Val. The Bone Man died that faithful night thirty years ago, but just like evil that can't be stopped, good cant' be stopped, either. Like evil, good waits and waits until it sees an opening, a crevice to breathe. Like evil, good has it's followers, too. They just need a nudge in the right direction, that's all, to get them started.

"Now you're playin' the Blues," the Bone Man said. He strummed his guitar.

"You still won't win," said the voice. A rumble of distant thunder followed his words. "I've got two more books to go and Maberry will fall in line, just like Ruger did." 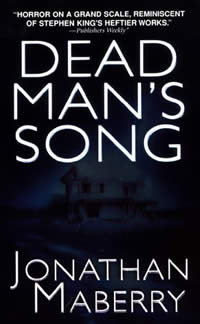 Ruger's swath of destruction begins in the cornfields, continues in Val's home, and gets fortified in a sickening encounter in Dark Hollow. Ruger is the catalyst that accelerates Griswold's plan for Pine Deep—and maybe every other town and city.

Maberry builds the foundation for the coming battle with classic horror elements like a bug-filled homunculus messenger, reanimated dead guys, and a fast approaching Halloween season while he positions his combatants in Ghost Road Blues, but leaves much of the why for later.

Of course, comparisons to other noted horror authors is highly likely, but for the present, Maberry's style focuses on his character's actions, not their thoughts, and this moves the story fast and furious. Ghost Road Blues is both event and character driven, using a disarmingly simple style that conveys the thoughts and feelings of his characters without endlessly describing their thoughts and feelings. Yet within this simplicity lies a writer who knows the elements of horror inside and out, and can call them up in a whirl of terror-filled images.

" Wait a moment," said the voice. "You didn't mention that your copy of Ghost Road Blues was personally sent to you by Maberry, and he autographed it for you. Personally. Oh, and there's that little business about you being a contributing editor to his magazine, Cryptopedia."

"Yes, he sent me a copy of his book. He also sent me a copy of his other superlative work, Vampire Universe, which he autographed for me, too.  I also reviewed that one favorably. So what's your point? That I can't be impartial. That I have a vested interest to play nice? Well, Griswold, or whatever the hell you are. We're writers. We know all about the Blues. We can take the good with the bad because we write about it everyday. We can poke each other in the gut just as well as we can pat each other on the back. That's how we get better at what we do. So far, though, Maberry doesn't need any poking." I shut my laptop and headed to bed.

"But you have forgotten one thing," said the voice. "You wrote your notes all over that personally signed first edition of the Bram Stoker winner for Best New Novel." A peal of thunder shook the room.

"That's cold, man. You're on your own with this one. That's beyond even me," he said, and vanished with a twang from his guitar.

"Arrghhhh!" I screamed, as Griswold's triumphant laughter echoed into the distance.

Your Maberry reviews are so comprehensive. Thanks!