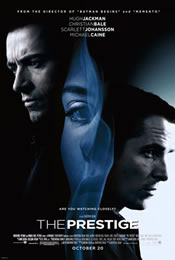 Like a well-performed routine of cups and balls, director Christopher Nolan and writer Jonathan Nolan manipulate the nonlinear twists and turns of Christopher Priest's novel, The Prestige, pausing here and there just long enough to make sure we are watching closely until the revelatory climax. Steampunk science-fiction merges with Victorian-era stage magic in this engaging story of rival magicians striving to upstage one another in a dangerously escalating battle of wits, secrets, and one-upmanship bravado.

Robert Angier (Hugh Jackman) and Alfred Borden's (Christian Bale) obsessions for their magical art, and for one teleportation illusion in particular--the Transported Man--provide the drama in this story set against the backdrop of turn-of-the-century London. Mingling the social horrors of workhouses--where little girls could be sent  for want of money and family--with the wonderment of stage magicians, the headliners of their day, performing their pseudo-scientific and preternatural miracles to the amazement and delight of their Industrialization-era audiences.

While Cutter (Michael Caine), Angier's right-hand man, notes the secret to a trick impresses no one, it is the secret that must always be guarded from jealous rivals eager to showcase it in their repertoire. To protect his secrets, Borden encrypts his notebook diary with a transposition cipher, although Angier eventually does read it. His diary helps provide the main narrative structure of The Prestige as it moves back and forth between Borden's and Angier's points of view and lives, and also forward and backward in time, to show their rise to prominence on the stage and their growing hatred for one another that begins with one death and ends with many. It is the secret of how Borden performs the Transported Man that consumes Angier, leading him to turn to the brilliant and eccentric Nikola Tesla for a solution to top Borden. David Bowie plays the real-life scientist, inventor, and eccentric electrical wizard with a quiet, world-weary aloofness.

While the Transported Man illusion is more clever cinematic fancy than reality, other magical elements of the story are historically based. Chung Ling Soo, the Oriental magician that fascinates both Angier and Borden before their rivalry begins, was the stage persona of William Ellsworth Robinson, a not so Oriental impersonator. Robinson played the part of an Oriental magician, onstage and off, and traveled with an "interpreter" who spoke for him. It was the dangerous Bullet Catch trick that eventually put an abrupt end to Robinson's career. The Bullet Catch is briefly shown in the film as Borden attempts to appease an inebriated and unruly audience of bar patrons during a performance. Unfortunately for him, Angier, in disguise, misfires the gun on purpose to disastrous results.

The Vanishing Bird Cage trick is also dramatized in the film. In a scene where Borden repays Angier in kind, he forces the cage shut prematurely, crushing fingers and bird together, to the horror of Angier's audience. While it is a classic effect in magic, its original use did put a crushing end to any bird placed within it. This unsavory consequence to the trick gives the impetus for the scene where Borden meets his future wife, and sets up the underlying tone of "getting dirty," the lengths each man will go to to perform his craft and go one better than the other: how much will they sacrifice to master their craft? 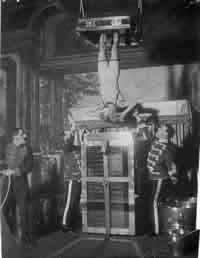 Harry Houdini's Water Torture Cell escape provides the catalyst for the rivalry and hatred both men feel toward each other. Angier and Borden, acting as audience stooges for Milton (played with his usual aplomb by Ricky Jay, who also acted as magical consultant for the film), bind his assistant--and Angier's wife--with ropes before she is lowered into her watery prison. Cutter stands by, axe at the ready and pocket watch in hand, in case anything goes wrong. As the seconds tick by he realizes she is in trouble, and wields the axe again and again against the glass to release the water before she drowns.

In actual performance, while Houdini did employ a trusted individual to stand at the ready with an axe should anything go wrong, it was done for showmanship, not safety. Houdini also directed his audience to hold their breadths as he struggled to release himself. Only when they were gasping for air would he triumphantly throw the curtain aside to reveal his dripping wet escape. Unlike the film, Houdini was lowered into the tank upside down with his ankles securely held in stocks.

Both Hugh Jackman and Christian Bale do a skillful job giving believability to the sophisticated, book-learned Angier, and unsophisticated, street-smart Borden. Their personalities reflect the style of magic each performs; for Angier, it is a polished presentation with a little whimsy; for Borden, it is more a gruff challenge to his audience to figure it all out. While Angier wants to astound his audience with magic, Borden wants to impress his audience with his magical prowess. Where Angier weaves more substance around the entire presentation of the effect, Borden just performs the trick. These contrasting styles can be seen in magicians from the Victorian Age to the present day.

In the course of their rivalry they don disguises and infiltrate each other's performance to wreak havoc. Angier even goes so far as to tell his comely assistant, played by Scarlett Johansson, to work for Borden in order to learn his secret for the Transported Man. Fierce rivalry among magicians was prevalent in real-life also. Aside from pasting over their competition's show posters with theirs, or mimicking a successful magician's repertoire even down to the patter (magic term for the words spoken during the trick or illusion), magicians have often spied on their competition in order to learn their secrets. Either by sitting in the audience, or bribing an assistant, or, as Kellar did, by boldly walking up on stage during performance of the Entranced Fakir to see how it worked, the insatiable need to know how it is done is always uppermost in a magician's mind.

Houdini would often disguise himself and attend a rival escape artist's show. When the proper time came, he would either reveal himself or get invited onto the stage so he could sabotage the act. In this cinematic equivalent, Borden disguises himself and attends one of Angier's performances to sabotage his version of the Transported Man. With glee and uncharacteristic panache, he reveals the secret to the audience, reveals himself triumphantly, and implores them to come and watch his much better magic show coincidentally playing in another theater.

Mixed with the magic of illusion in this Industrial Age of wonders is the magic of science, as exemplified by Nikola Tesla, who first appears in a blazing shower of lightning. It is the relationship between Angier and Tesla that provides the story with its horrific climax. From the field of light bulbs eerily glowing without the benefit of wires, to the  hundred discarded illusions, each filled with a part of the lifeless soul of Angier, The Prestige is a mixture of now you see it, now you don't, and a glimpse into an age of wonders past.

I've watched the film myself and I should say it's underrated. Anyway, hope you can also check out my site and my cheap groomsmen gifts (http://www.executivegiftshoppe.com/grgrgiun20.html) and let me know what you think of it.