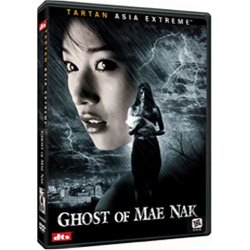 In your article in Asian Cult Cinema (No. 51), you mention the challenge of directing the film in the Thai language. What were the other cultural challenges you faced--as a Western writer and director--in making The Ghost of Mae Nak , a Thai language horror film?

Making Ghost of Mae Nak in Thailand as a Thai language horror film did bring about many challenges. The day before filming, the entire Ghost of Mae Nak cast and crew went to the Mae Nak shrine in Bangkok to give an offering and asked Mae Nak for permission to make a film about her. This is an actual shrine to Mae Nak where many Thai people ask for guidance and blessing. I felt she gave us her blessing as the filming went very smooth and it was a joy to direct.

Some members of the crew were superstitious about Mae Nak and would wear Buddhist amulets to protect themselves from her spirit. And the actress named ‘Cartoon' Pornthip Papanai who played the Ghost Of Mae Nak-- and the period Mae Nak-- would pray to her on set to ask her for permission and blessing before we shot the scene.

Communicating with cast and crew was difficult at first, but filmmaking is a slow process and we eventually learned to find ways of understanding. Of course I had translators, and there was the script, which was written in English and translated perfectly into Thai to work from. As a director I had to be precise about what I wanted and always double-checked the information was clearly conveyed. A film director is highly regarded in Thailand which also means it becomes a responsible role.

What is it about the legend of Mae Nak that inspired you to write and direct a movie about her?

The idea for Ghost of Mae Nak came about when I first went to Thailand to work as a cinematographer for the British feature film Butterfly Man (later I was awarded Best Cinematographer at 2003 Slamdunk Film Festival Park City for my photography). While in Bangkok , I became fascinated with Thai legends and Ghost stories. I heard about an actual shrine at Wat Mahabut in the Prakahnong area that is devoted to a famous female ghost legend called Mae Nak (Mother Nak). The Mae Nak shrine is visited by hundreds of Thai people everyday who ask for blessing and guidance. I became more fascinated with the Mae Nak legend and her tragic love story.

I also discovered that there had been many films about her over the last 50 years. I watched the definitive Mae Nak period film called Nang Nak directed by Nonzi Nimiburt. This film concluded with the ‘evil' spirit of Mae Nak being held captive in a piece of bone cut from her forehead by an Exorcist Monk, and the bone was lost in time. It was here that I was inspired to write my script and continue the Mae Nak story.

In Thailand Mae Nak is a legend and there are many stories about her. A lot of people believe the legend to be true and the Monk who exorcised her did exist. The legend is as famous to Thailand as Dracula or Jack The Ripper is to the West.

Why do you think Mae Nak is so revered by many Thai people?

Many Thai people revere Mae Nak, because they believe she once lived and her spirit still lives on. Couples, who go to her shrine with offerings, ask for a favor or guidance. One of the most common requests is for Mae Nak to bless them with conception of a child and protection during the pregnancy. This is because Mae Nak is seen as a guardian Mother--that is why she is known as Mae (Mother) Nak.

The story of Mae Nak is also a tragic love story and about love that transcends death. This is also valued and it was an inspiration for me to tell her story.

Which directors inspire you the most and why?

Many filmmakers inspire me. Sometimes it is because I've seen a film that has an impact on me and triggers an emotional or creative inspiration. Then films that are related to a script I am writing inspire me. Since I write horror stories I watch a lot of horror films for inspiration. I would say ‘horror director's' who  inspire me are ones who have created a style, a language or an atmosphere that has defined horror and set a horror precedent.

While the Final Destination-styled denouements of several bad characters in the film are quite imaginative, two stand out in my mind: Mr. Tock's untimely run-in with fire and that nasty sheet glass incident with the seedy house attendant. Can you tell us more about the choreography and logistics involved in setting those terrific stunt effects up?

Mr.Tock's death by immolation or “Death by Chicken Barbecue” as we called it, took a lot of planning. It had three stages. First Tock falls backwards after seeing the Ghost, in to a large pan of boiling oil. Scolding and boiling he runs out into the path of a TukTuk taxi and is hit by it which sends him hurtling into a large chicken barbecue rack where he is impaled and bursts into flames.

First we had to design a Chicken barbecue big enough for a man to fall on. I came up with the concept and the Production designer drew up a blueprint that was then passed onto a metalworks company to physically build it. It was quite sophisticated because it had to work and rotate 8 chickens on metal skewers over a real flame. The skewers had to be ‘break-away' so the stuntman could fall on them. The effects company First Ideas created them. The stunt company Baan Rig provided a brave stuntman who would be completely set on fire. The fire stunt was handled with great care and caution with Hollywood supplied fire retardants and protective clothing and an ambulance on stand-by. It took a whole day to film that sequence at the actual market square, and it attracted a huge crowd who patiently watched and applauded.

A falling sheet of glass or “Death by Dissection” kills Mr. Ant, the seedy house attendant. This too required a lot of planning. We filmed this at the Tobacco Studios backlot where we built a street set lined with market stalls and traffic.

Nirun Changklang, the actor who played Ant, first had to visit the effects company First Ideas to have a full life-size cast of his entire body in latex made. The authentic looking body-cast was literally sliced in half from his head through to his groin and then joined back together with a hinge.

On set, Baan Rig wired up the two large sheets of glass (Plexiglas) to fall on cue. The life-size Ant figure was treated like a giant puppet with wirework to support him and control the split. Later the CGI effects company Digital Lab would enhance this with computer generated wire removal and digital blood. The scene also required a stunt vehicle and driver for the screeching bus, stunt extras to jump out of the way, a trained dog to pick up Ant's severed arm, and a bucket full of animal offal to add grossness to the “Grand Guignol” scene. The Ghost of Mae Nak DVD will feature my Director's Video Diary as an extra that will visually show how the death scenes were filmed as well as the day-to-day film making process.

What will be your next film in horror cinema?

I am writing an exciting new horror script set in the US in English language. I do have several other spec horror scripts I have written and I am also rewriting or fine-tuning them. This is something I always do with my scripts until they get made. I do have a new Thai/Asian horror script, but with Western characters and English language, it's a great idea. I am keen to develop my passion for horror/fantasy films. I have some great, original ideas, however I'm afraid I don't want to reveal anything about my scripts as yet, but I will keep you posted.

Finally, what question have you been dying to be asked, but no one has asked yet? And what's your answer?

I guess the question I would like to be asked is to describe the type of writer/director I am?

As a writer/director, I feel I am drawn to explore darker stories with adult themes in the horror and fantasy film genre. As a writer I love researching the subject for a new script. I become possessed with wanting to know as much as I can about the subject. This involves reading biographies, historical literature, or any related source of information I can acquire. I also watch a lot of films or documentaries, especially horror based, as I mainly write horror. Writing a script takes a lot of energy and requires a strict discipline but can be very exhilarating.

As a Director, I feel I am a well-organized, calm director, with plenty of planning, but I also like to allow for the unpredictable ‘cinematic' moments. I have loved horror films from an early age and aspire to direct a horror film that would become a classic. Some of my favorites are; The Changeling , Stir Of Echoes , The Shinning, The Exorcist, Suspiria, The Haunting, Candy Man, Final Destination, and The Omen.

Finally, I would like to thank Zombos' Closet for showing interest in the Ghost of Mae Nak and myself as writer and director. I would like to thank the fans of Ghost of Mae Nak. I appreciate your support. And for those who have not seen it, then I hope you will give the GHOST a chance and allow yourself to be taken on a ghostly thrill in Bangkok, Thailand and discover a true Thai legend.