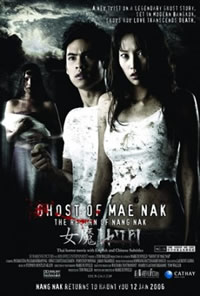 In this Thai horror film, writer and director Mark Duffield updates the legend of Mae Nak, which many Thai people reverentially believe in, adds J-Horror makeup and shock-cuts, and ups the ante with a few well-choreographed gore stunts. The gore stunts rely less on bloody chunks and more on creative lighting, timing, and framing to deliver chilling tableaus of vengeance wrought by the ghost of Mae Nak when anyone gets in her way.

Along the way, Duffield maneuvers through the Thai cultural nuances of family and society to keep the story interesting for Western audiences not accustomed to seeing young people turn to elderly family members and Buddhist monks for help and guidance. In Western horror movies, it's usually your family and the authorities who either ignore your pleas for help, or try to kill you; so it's refreshing to see grandmothers who believe in ghosts and take you to blind seers for help. Duffield also tones down the exaggerated acting style common in Thai films, which lends more seriousness to the story.

Nak and Mak are soon-to-be newlyweds. Not only do they need to find a place to live fairly quickly, they also must cope with the usual pressures of work and doting families while preparing for their wedding in present day Bangkok. Mak is also coping with prescient nightmares regarding one disgruntled ghost with long black hair and a hole in her head big enough you could drive a bus through.

When they find a fixer-upper old house in the Phra Khonang section, the unscrupulous and very superstitious real estate agent pressures Mak (Siwat Chotchaicharin) into signing the contract without reading the fine print. Two thieves have also staked out the house, patiently waiting for Nak (Pataratida Pacharawirapong) and Mak to move in with their wedding presents. The house also contains one previous tenant not mentioned in the lease--possibly the original owner--late of this world, but still looking to fill the void left by the loss of her husband and child. Mae Nak, the ghostly tenant, takes a fancy to Mak and haunts his dreaming and waking moments.

On the plus side, Mae Nak goes after anyone who tries to hurt Mak. So when the real-estate agent tries to execute the fine print clause that would force Nak and Mak out of their new home, the ghost follows him. The poor fellow winds up losing more than he bargained for. Now let's see, what about those thieves? Sadly, they also experience a crushing reversal of fortune, but not before they put Mak in the hospital with a coma.

Then there's the shady attendant to the astrologer Nak goes to for advice. My, my, my, so many unscrupulous people around, what's a vengeful ghost to do? In the film's best horrific scene, the attendant becomes a decorative window. It's a one-two-three stunt that ends with a doggy treat; a nice example of timing and coordination.

But Mak is still in a coma, and Nak is hampered in her attempts to help him by Mae Nak, who apparently wants Mak for herself, which means he has to die. Buddhist monks are called in, and in two lively scenes involving levitation, Mae Nak puts up quite a fight. Nak must fight against time as the monks prepare to release Mak's possessed body by performing trepanation--a similar surgery done on Mae Nak to appease her restless spirit.

Duffield uses ambiguity here, as the legend of Mae Nak is ambiguous to begin with. On the one hand, Thai people revere her for the endless love story surrounding her, but then threaten misbehaving children with the mention of her name on the other. Unrequited love or not, she does have a reputation for a nasty temper. This ambiguous nature of Mae Nak extends to her actions in the film. While she does dispatch anyone threatening Nak and Mak, she has a choke-hold on Mak and keeps Nak from stopping her. So what's it to be? Freedom from ghostdom or recapturing a lost love through Mak? It's a difficult decision for Mae Nak, which Duffield reflects in the conflicting actions she takes while both helping Nak to free her earth-bound spirit, but stifling Nak's actions to save Mak.

Another interesting ambiguity running through the film is how modern Bangkok is filled with very old traditions. Buddhist monks treating patients in hospitials is a form of alternative medicine rarely seen in the West. Duffield's audio commentary on the DVD is filled with observations about these traditions, along with his rationale for choosing scenes and their setups--including why you never really see Nak ever kiss Mak in the film. The extras also include the director's video diary and the theatrical trailer.

The ending is a sequelization-antic (my term for the type of ending commonly used in horror films to set up the franchise for sequels) that actually works and sets up the premise for more Mae--don't get in my way or else--Nak films. But before the ending, there is an unexpected twist you may or may not see coming.

Director, writer and cinematographer Mark Duffield and a talented cast of actors and crew deliver an effective and modern ghost story based on an old tale of love found, love lost, and love sought, and adds a few dashes of visual horror to spice it up.