The Valley of Gwangi (1969)
Theater Herald

Thanks to fellow movie and Ray Harryhausen fanatic Terry Michitsch, here's the theater herald to The Valley of Gwangi. Wikipedia has a nice write-up on this movie, which mentions that whenever an episode of Scarecrow and Mrs. King (a 1980s tv show) showed a television playing, The Valley of Gwangi was on the screen. We've seen cowboys and aliens on the big screen (a stinker, unfortunately), but seeing cowboys and dinosaurs again wouldn't be too shabby if done right. 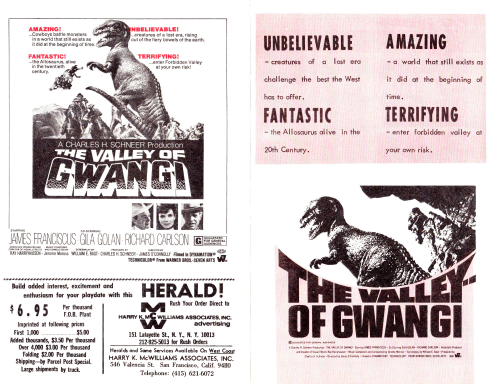 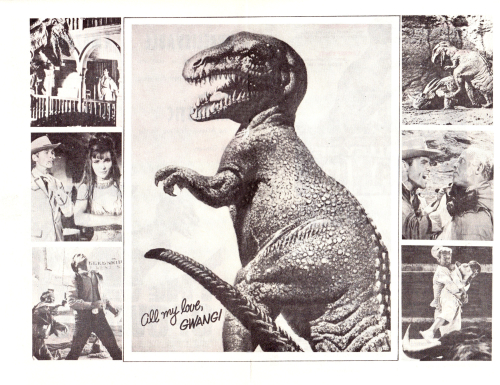 The Beast with Five Fingers (1946)
Pressbook

Name the top classic horror actors and Peter Lorre must be included in that list. Those eyes, that voice. Standing still he looked sinister. Here's the pressbook for The Beast with Five Fingers. Don't miss his Stranger on the Third Floor (1940). I always get a chuckle out of the theater lobby promotions that included first aid stations, with fake nurses standing by to either give you a stress test or call the ambulance afterwards. I'm not so sure we've gone beyond the ballyhoo hokum; maybe just moved it online instead. Would be fun, though, to have a nicely old theater do the full monte for a midnight horror show, complete with fake nurses. One interesting tidbit, if true: Singing Waiters Group Honor Former Associate: Rober Alda "was once the youngest singing waiter in America...at the Old Barn in Brownsville, Brooklyn."

ComicRack and YakReader version: Download The Beast with Five Fingers 1946 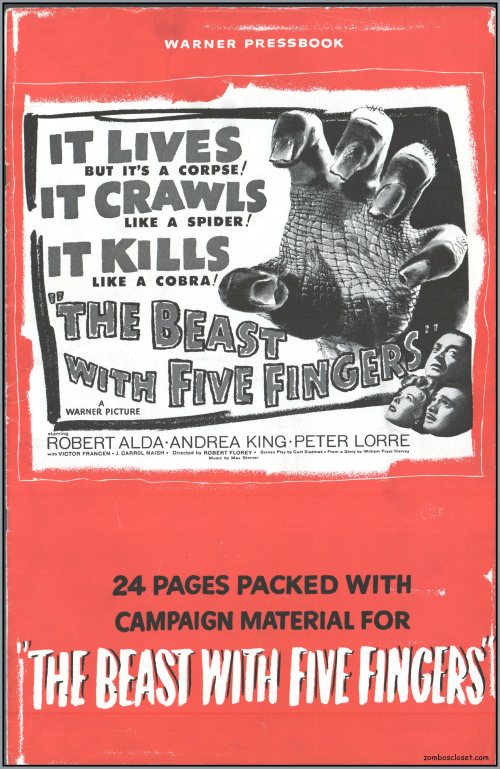 The Corpse Vanishes is often described as a weird movie. Probably, given to the Monogram budget, made weirder due to the lowest common denominator production values. Yes, a cheapie done quickly; yes, a slow burner; yes, the editing needed a bit more oomph (okay, more than a bit; and that's at a running time of 63 minutes). Bela Lugosi, however, delivered his usually interesting mad-scientist performance and the staging is other worldly due to dialog and blocking that's either undercooked or overdone. But there's something about Bela Lugosi that is always watchable and, especially with the stern, sinister, face of Elizabeth Russell (Cat People, Return of the Cat People, The Seventh Victim) adding to the glum proceedings, the hour goes by with limited eye-rolls (for me, anyway). There's something to be said for Monogram's poverty row horrors, which range from say what? to what did I just watch? that captures the 1940s like no other movie from that period does. With Angelo Rossito (all 34 inches of him) tossed into the mix (well, maybe 'tossed' is the wrong word to use around small persons, but you know what I mean), and Minerva Urecal adding the criminal element that she brings so well, I recommend you catch the blu ray for this movie or the MST3K laugh-fest version. I also point you to reading Poverty Row Horrors! by Tom Weaver, which covers the Monogram, PRC, and Republic horrors of the 1940s for more information on this notable category of horror cinema. While I don't always agree with Weaver's critical assessments, he does provide a lot of background information of interest. 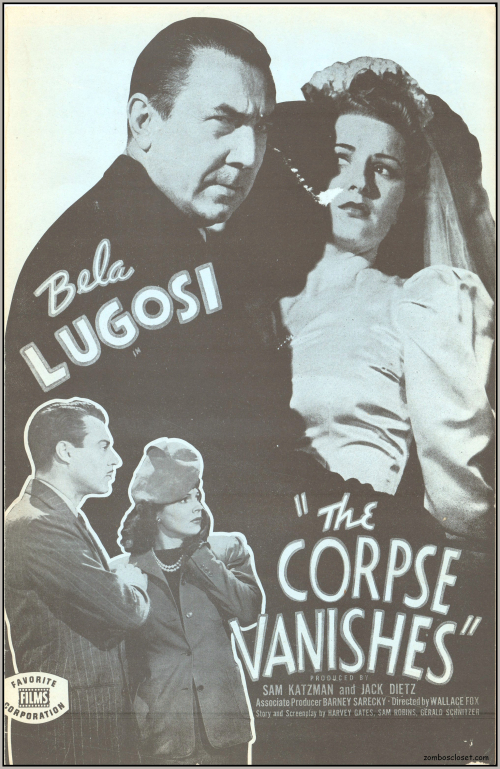 I Was a Teenage Frankenstein Belgian Poster

Here is a 14.25 x 21.5 inches Belgian poster for I Was a Teenage Frankenstein. The room left at the top allowed local theaters to add their promotional information. Not particularly rare, but a great illustration nonetheless.  Below it is a bit of fun with a scene from the movie. 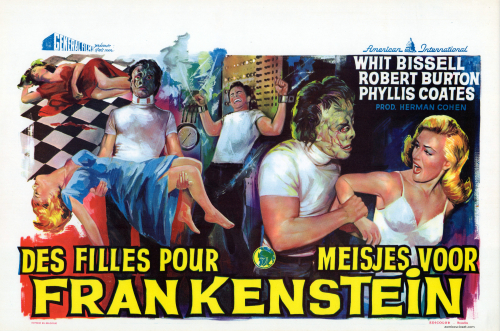 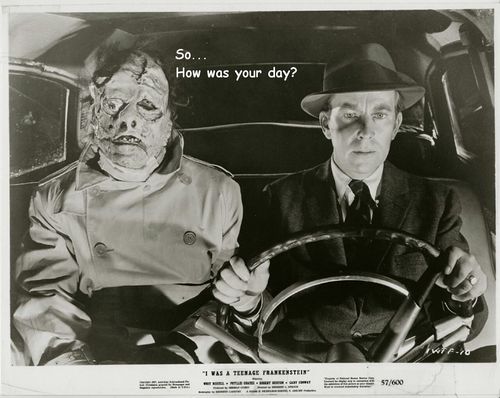 Unfortunately, without the boffo effects of today, this serial pales in comparison to today's superhero magnum opuses. But the characters are still endearing and it must have been quite exciting to see your favorite comic book hero on the big screen for those young audiences. More of a budget would have helped a lot, too. I wish I had a lot of those tie-ups for my collection.

Fly over to to see more pressbooks From Zombos' Closet. 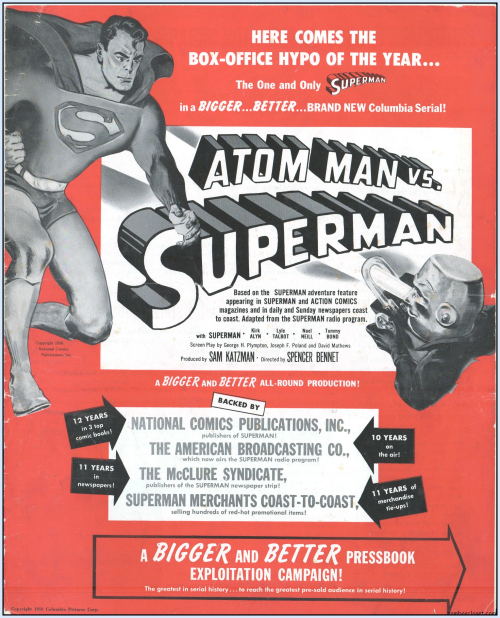 Okay, so what if a young Joe Dante panned Cry of the Werewolf in an issue of Famous Monsters of Filmland. Sure, the poster art is the best thing about this movie, but at least you can read the Scary Wolf-Woman On Vegetable Diet for a laugh, anyway, on page 6.

Don't cry! You can paw your way over to more pressbooks from Zombos' Closet. 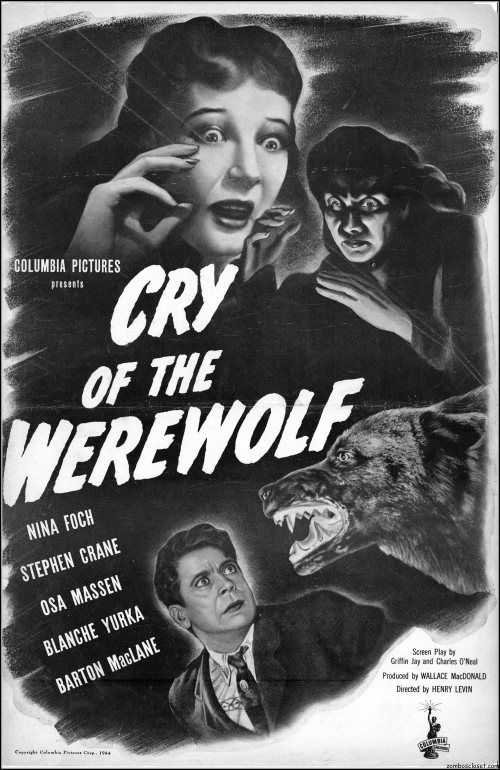 Here's another rare pressbook: Tower of London with Boris Karloff and Basil Rathbone. A wild and wonderful 17.5 x 23 inches when opened to read. I'm not sure if any pages are missing as I found this one in loose sheets. But what's here is still stellar. Aside from the auctions selling the covers alone, this original release pressbook has not been shown before. You lucky devils. Universal really overdid themselves with this one. The Showmanship page lists really cool theater lobby promos. You will need a big screen to view this beauty in all its glory.

You don't need to be sent to the Tower to find more head-lifting pressbooks from Zombos' Closet. 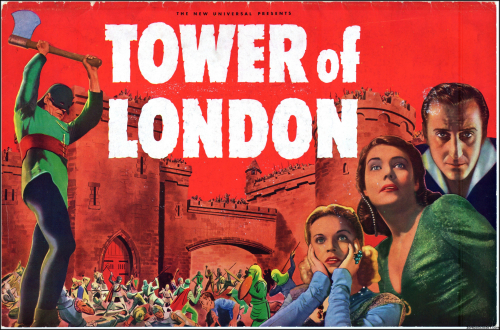 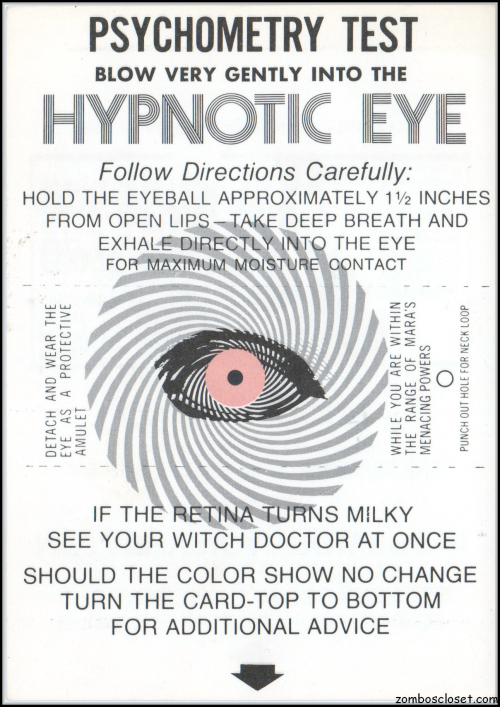 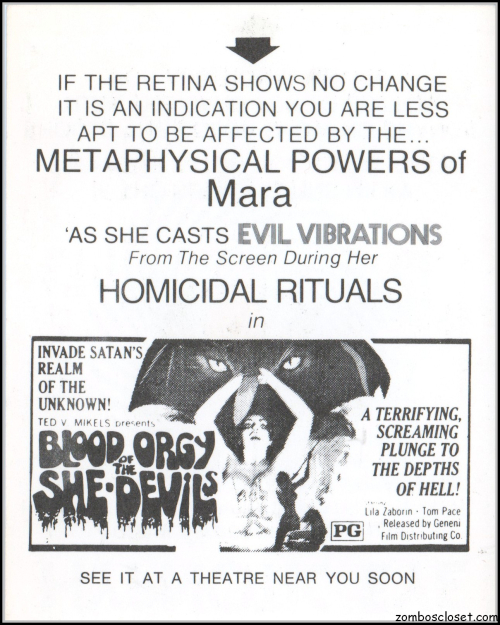 While the non-American pressbooks can be short on pages and promotional and commercial tie-ins, the artwork and printing layout can be quite creative. Here's the French pressbook for Abbott and Costello Meet the Mummy. 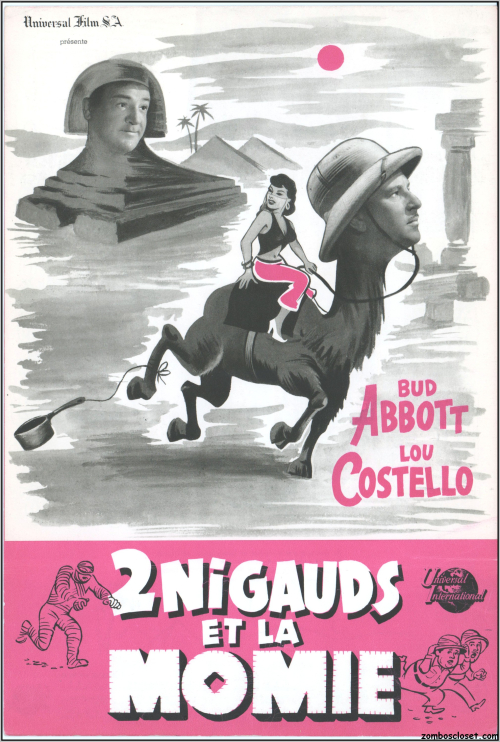 In this second part of the Mary Poppins pressbook is the incredible merchandising. My favorite is the Louis Marx wind-up, but you will find Gold Key comics, Whitman books, records, puzzles, her carpet bag, Golden Books, clothes, and more. Toy merchandising on a grand scale may have started with the Star Wars franchise, but Disney was years ahead in tying loads of merchandise to its movies. 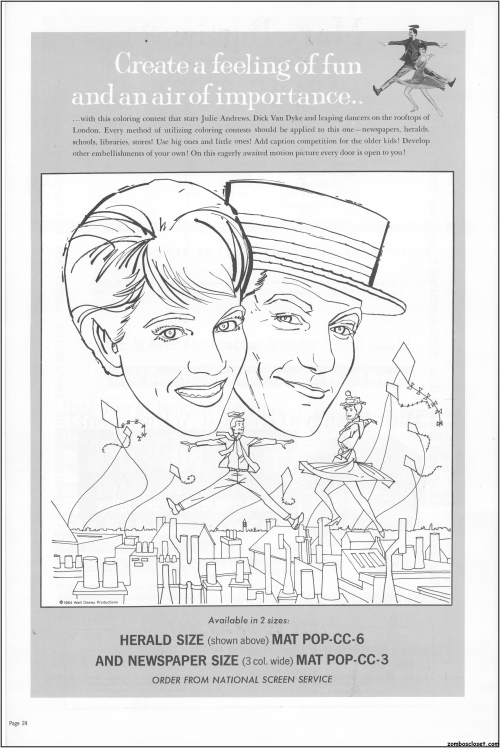 At 44 pages, the pressbook for Mary Poppins is supercalifragilisticexpialidocious, indeed. Every Disney pressbook I've seen has an incredible amount of merchandising and promotion packed into it. While the sequel, Mary Poppins Returns was enjoyable, there's magic to be found in the original that cannot be repeated. The Sherman Brothers music score is emotionally compelling and the talent-filled chemistry between Dick Van Dyke and Julie Andrews certainly does make you want to dance. Using the Edwardian period was a smart move, too. P. L. Travers, Mary Poppins author, may have hated the movie, but boy was she wrong. Everything, from the casting to the set designs, and even the animation, created a wonderful film. Well, maybe except for Dick Van Dyke's cockney accent, perhaps, which he did own up to and apologize for (his voice coach couldn't do one either). But as a kid, I hardly noticed, good or bad. Now that I think of it, it does remind me of when I visited London in 1982 with my father, who couldn't stop himself from using a really bad cockney accent everywhere we went. If looks could kill, we would have been dead for sure. Had I a magic umbrella and a strong wind to carry me away, I'd have left him toot sweet.

You don't need to wait until the wind changes direction to see more pressbooks from Zombos' Closet! 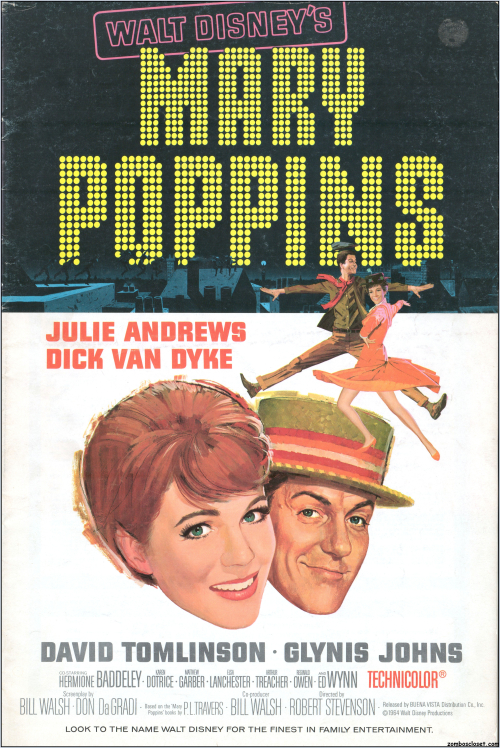 The Living Dead, also known as The Scotland Yard Mystery, has another mad scientist somnambulizing people (yes, I think I just made this word up!) into a zombie-ish trance to do his criminal bidding. Since my favorite color is purple I couldn't pass up this pressbook. That poster art is pretty cool too. 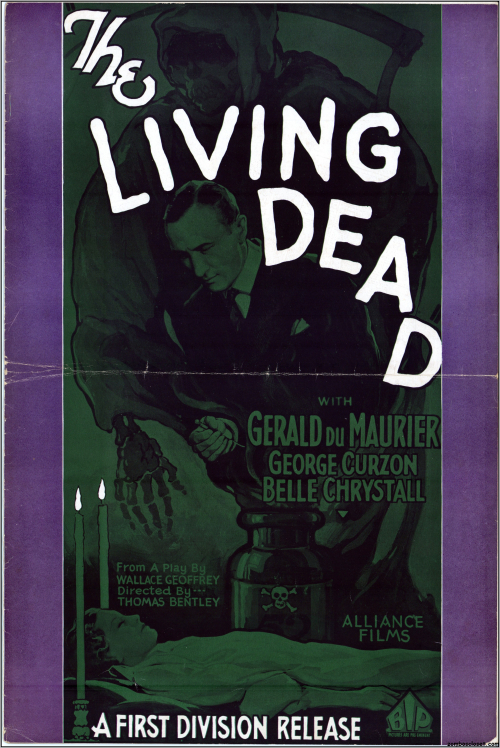