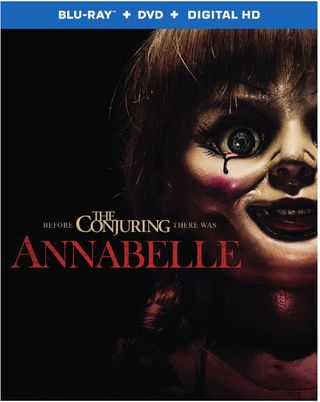 "Well, it is about time," said Zombos.

He had been away on vacation, some sort of trip around the world as he termed it. For me it was a blissful vacation not having him underfoot. But now he was back. Nothing truly good and enjoyable ever lasts, does it?

"Time for what? I countered. I was a bit rusty with him being away for so long, but my mental machinery was slowly beginning to hiss as it built up steam.

"Why, time you got back to writing my boy. What is all this nonsense with posting scans of this and that? You have grown lazy while I have been away. Time for some meaty review or insightful observation, or perhaps even a rant or two, instead of another lobby card or magazine or movie pressbook or--."

"Those scans of this and that, as you so blithely put it, are our history old chap. Mine, yours, ours. Monsterkid history. From the vaults of memory history. You know, the stuff fond memories are made of. Otherwise known as nostalgia for older horror fans, and maybe an introduction to such wonders for those who grew up much later."

He opened his mouth to respond. Chef Machiavelli interrupted with a tray full of pistachio cannolis and a pot of his angelic espresso (you know, one cup of it and you're in heaven). We quickly both agreed to disagree between bites and sips.

"And I haven't been all that unmindful. Here's my review of Annabelle," I said.

"Splendid." He settled into his wingback armchair. His long, thin arms came to rest in their comfortable positions across its armrests. I jotted a mental note to have the chair reupholstered; its armrests, now threadbare and shiny in spots, needed attention.

"Let me hear all about it," he said, as he took another sip from his cup.

I didnt' see Annabelle in a theater. 2014 seemed to be pretty dry in creativity for widely released horror movies and I decided to simply wait and catch it on DVD. Warner Bros. Home Entertainment graciously offered their DVD+Blu-ray discs for review. I said yes. Of course.

You'll want to pop in the Blu-ray disc, it has all the featurettes, although I found each one of them too short in running time for my inquisitive and seasoned (okay, jaded) mind; but sure, they still are pertinent and worth watching. Especially the deleted scenes from the movie and the descriptions of the makeup work on the demon. A funny moment pops up while the effects team discusses the preparation of Annabelle's dolly companions for their full-blown demonic hazing. Other deleted scenes show how the storyline had changed during editing, forcing the deletions.

Looking at the designs for both demon and doll, they show a careful artistic balance between the demon's gargoyle (aka woodcut) looks and the not-quite-sinister-but-damn-she's-a-little-off Annabelle that you can appreciate. Both look ghastly when you take a long hard look, and the movie's terror easily flows from their visual and narrative suspense. Having the Annabelle doll become the conduit for the demon's evil makes it a terrible plaything in more ways than just looks. I still can't believe anyone in their right mind would go near a doll that looked like Annabelle unless they had a few stiff drinks beforehand. And were nearsighted. And probably didn't like the person they were giving the doll to.

But I'm referring to the reel doll, not the real one (see the picture), of course. As the movie progresses, Annabelle's porcelain face turns darker and her lighting and coloration more ominous as she gets her sinister on, while her already alarming smirk, grows smirkier by the minute, or seems to, making you wait for her to say something you really don't want to hear. Thank god she doesn't have a pull-string. I'm not sure who's scariest among cinema's terrible dolls such as the Saw and Dead Silence Billies, or Chucky and Tiffany, or Talky Tina, to name some of them, but that unblinking stare of Annabelle is probably the most deftly executed compression of horrifying countenance hidden in an almost pretty face; and she has Hell on her side, so there's your win-win for mayhem and scares. 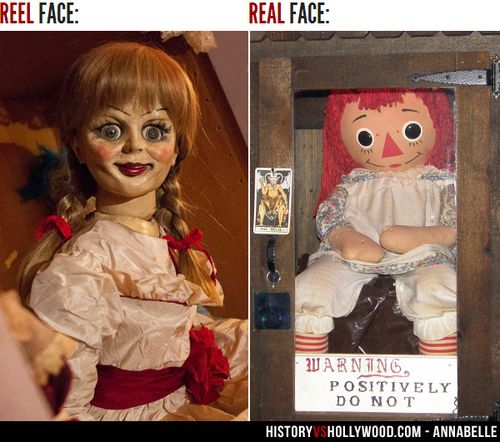 And that's when you realize, and a pleasant surprise it is, that director John R. Leonetti does more with less, greatly increasing the movie's impact. Easy jump scares are replaced by a more studied atmosphere of growing doom and gloom (like the one you find in the original Omen), and he even dares to do a long take that makes the origin of the doll's cursed existence a stylish treat as much as it is a brisk-paced blood-letting (without egregious gore). Lingering closeups of Annabelle's eyes makes you wonder when they will move, and seeing Annabelle sitting in a rocking chair, or on the shelf, makes you watchful for any sudden movement. Of course she doesn't wink, blink, or deliver epigrammatic barbs like Freddy, or even move a ponytail; except for one scene where she does move, but it's what's behind her that's more scary.

The deleted scenes show what didn't make it to the final cut. One can understand why the building's creepy handyman character was removed (pointless for the narrative), and why two incidents involving the baby were also left out. The first, which includes many cats, is visually arresting, but off premise with the rest of the storyline (it happens, it's weird, so what?), but the second generates some real goosebumps. It involves baby's bath time and danger. I'm sorry it didn't make the final cut: it's that strong. But keeping it in would have probably upset a lot of audience members, and undermine the demon's purpose (a soul to need, to a demon will feed kind of purpose).

The demonic and satanic cult aspects of the movie are framed by a surfeit of Catholic faith, which almost becomes cloying and preaching when Father Perez (Tony Amendola) ponders the glory of motherhood as worried mom, Mia (Annabelle Wallis), listens distractedly. Scripter Gary Dauberman's ponderously preachy dialog takes on a pandering-weight, and Leonetti dwells on it in one or two scenes, forcing his actors to the speaking cadence you see in those corporate training shorts many employees have suffered to watch with a game face.

There's the "problematic racial function" provided by Ruby (Alfre Woodard), the bookstore owner, as described by Inkoo Kang, in her review of Annabelle for The Wrap, that warrants further academic exploration. Later. I'm not sure why Dauberman resorts to it, but it is noticeable. Like all those red shirted, landing party, classic Star Trek personnel going to their doom, we know what's coming. But then he uses a more carefully crafted approach by injecting those 1960s notions of womanhood, realized through Mia's husband (Ward Horton): Mia is imagining things because she's going through postpartum depression. A few drugs and seeing a shrink, in between watching soap operas on television, should cure her.

Lucky for us Father Perez believes in evil. And demons.