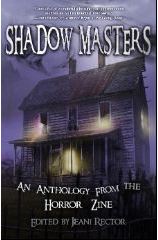 Here's my short story, Tommy Boy, which first appeared in Shadow Masters: An Anthology from the Horror Zine, edited by Jeani Rector, to put you in the mood for the smell of pumpkin innards, seductive taste of chocolate candy treats melting in your mouth, and the spirit-lifting giddy abandon that accompanies a walk through a moon-lit Halloween night swirling with Autumn leaves, dressed in your fears.

With great effort, Frank hoisted himself off the treehouse floor and up to the glassless window. The sun would be up soon so he had to be ready this time. He had only one chance left and the steady leak of blood from the deep, jagged, rip along his right leg was making him woozy. Duct tape could only go so far.

He knew this time he couldn’t miss and with more light he wouldn’t. He was sure of that.

The pain made him vomit. Again. He wiped his lips as best he could with whatever clean space he could still find on his sleeve, and steadied himself by grabbing the windowsill tight, although the growing numbness in his hands made that difficult. He leaned over the sill, biting his lower lip hard, making it bleed as he concentrated all his remaining strength on getting a long, good look. The cool morning air fanning across the sweat on his face helped clear the nausea growing in his stomach. But only a little.

In the fluorescent glow from the porch lights sixty feet away, he could see Tommy was still pinned under his BMX bike. With its chrome handlebars caught in the slats of the picket fence, Tommy didn’t have any leverage to free himself. Even if his small arms weren’t chewed to the bone in spots, they’d still be useless to help him. They kept flopping mechanically, back and forth, like he was at a baseball game doing the wave. Tommy loved baseball, thought Frank.

A bright orange pillowcase with the word “Booty,” written in big black letters with a magic marker, hung loosely from one of his wrists, its hoard of candy spilled on the ground in a neat arcing line that followed his useless back and forth motion. A badly aimed, yellow steel-tipped, crossbow bolt was stuck fast through Tommy’s wrist, pinning the pillowcase to it.

Frank turned to look at the pistol crossbow. It was supposed to be Tommy’s Christmas present. With all the goddamn push and rush for holiday shopping, Frank couldn’t resist. He’d wanted some playtime with it anyway. His eyes dropped to the beat up, dried up, flat-top leather steamer trunk it rested on. They had found the trunk at a yard sale. It was the only furniture in the treehouse. It was Tommy’s pirate treasure chest. Frank still wondered how he ever managed to carry it up the rickety ladder, let alone fit it through the narrow trap door in the treehouse floor.

Damn it caught in Frank’s throat as he looked back at Tommy, now more visible in the growing morning light, and tallied his misses: two yellow bolts were stuck deep in the picket fence close to the boy’s constantly bobbing head and another had flattened the BMX’s front tire, and another bolt stuck out of Mr. Wilson’s back, a neighbor.

Shitty shot, murmured Frank. He stared with fascination at Mr. Wilson’s eyeballs, bouncing from their sockets like bungee jumpers while the old man stumbled back and forth, first bumping into the picket fence, then into the telephone pole, then back again, around and around, like that damned yellow rubber duckie at a shooting arcade.

No, not any arcade, but Funfair’s; I was how old?

Frank’s heart raced. His palms sweated more. He was known as Frankie then. His memory skimmed shallow, then plunged deep, drowning him again with how shitty it felt to keep missing every time he tried knocking down that one stupid yellow duckie, smudged with grease, coming around and around, each of his shots hitting everywhere else. His dad had laughed at him, it was so funny. Eventually the scabby grunt agent running the arcade joint pulled the Duckie Shoot rifle out of his hands—Sonny, start smoking and grow a pair, will ya, then come back—coughing up sputum and tobacco with each word puffed over his hand-rolled cigarette. Frankie endured it. No different than being piss-soaked and frustrated, egged by name-calling—By my friends? My birthday friends?But I invited you…it wasn’t my fault I couldn’t hold it anymore, I lost control and…

Shitty duckie, said Frankie through Frank’s lips. For a moment he could feel the small Duckie Shoot arcade rifle being yanked from his hands. Stupid duckie, he thought and wiped his palms on his pants. His eyes fell on Mr. Wilson, again. Poor stupid duckie,he whispered,then changed his mind when he realized they were all poor stupid duckies, including him. Frankie and duckie and those dead duckies and Mr. Wilson and…Tommy. Tears welled in his eyes and he screamed so loud it hurt his throat. The pain shut his mind down, enough to bring him back to what he had to do.

The arm reaching through the window for his throat didn’t miss. He suddenly realized those poor stupid dead duckies could climb trees, especially when your scream sounds like a dinner bell. The stubby, mottled fingers choking and ripping his throat tightened, but one bitten-off pinkie and a split thumb gave him the leverage he needed. This chewed-up dead duckie was going down.

Frank slammed the invading arm against the window edge again and again until it cracked and the fingers let go. He gulped air, staggered back on his bum leg, screamed again to get through the stars, and reached around for Tommy’s Maple-solid Louisville Slugger bat. Tommy liked the feel of a solid wood bat. To Frank, the bat in his hands felt almost like the Duckie Shoot arcade rifle. This time, though, he wasn’t letting go.

He got into his batting stance and waited until a partially chewed head, minus one eye and both ears, poked through the window. He swung the bat up and out, going for a homerun. It felt good.

It also knocked him off his good leg and sent him rolling, nearly plunging him through the open trapdoor. Crap, I thought I closed that, he almost said out loud, but the thought flashed quicker than his tumbling. His bum leg dipped through the opening before he stopped rolling. Another dead duckie grabbed the opportunity.

Out of breath, aching in places that already were aching, and sprawled like some dumbass softball rookie, Frank couldn’t put enough energy into his ground-out swing and the bat only bounced off the dead duckie’s beak, breaking it. The duct tape on his leg tore away as the hand tightening on it pulled downward, letting his blood seep out, egging the dead duckie on even more. Okay, Mr. Thick-Nasty-Head-Dead-Duckie, it’s now or never.

Hey, I found a new sweet spot on the bat, thought Frank.

Mr. Thick-Nasty-Head slumped down, blocking the trapdoor opening, blocking any further distractions for the moment; but the dead weight kept Frank from slamming the trapdoor shut. He was running out of time anyway. He had more important things to worry about.

The sun was shining golden light into the treehouse when Frank picked up the pistol crossbow and loaded the last yellow bolt. He barely made it back to the window, crawling as much as he could, and when he tried to stand up, he vomited. This time he didn’t wipe his mouth.

What really bothered him more than anything was he couldn’t hold his pee anymore. He’d been dying to piss for hours. Oh, what the Hell. Not like anyone’d notice. As his pants leg got warm, he thought about the arcade and the yellow rubber duckie and his ruined birthday and his stupid friends…

…and now another dead duckie was tugging on Mr. Thick-Nasty-Head from below, and inch by inch, the body would soon be free of the opening, allowing more dead duckies to go around and around, too many for Frank to handle. Frankie, the pissing kid, started screaming out of frustration. Again. He almost threw the pistol crossbow out the window before he realized what he was doing. What stopped him were the Almond Joy candy bars on the floor. They had fallen out of his coat pocket. They were Tommy’s favorite candy.

Both Frank and Frankie stopped screaming. They ignored the pain. They ignored the sticky blood and warm piss dripping down their leg. They looked at the yellow bolt cocked in the pistol crossbow, spit on it for good luck, and looked at the pirate treasure chest. They crawled over to it and pulled on its handle with one hand while the other one helped drag them and the chest to the window, inch by inch, until they reached it. They pulled themselves up, using the trunk as support, then sat on the lid.

Frank held his breath as Frankie took aim. Shaking hands braced against the window’s edge. The sound of Mr. Thick-Nasty-Head sliding free of the trapdoor didn’t make them turn around. They waited for that grease-smudged rubber duckie to swing around again into firing range. This time, they were leaving the arcade a winner.

Once more, for no more, thought Frank. Warmth pumped through his arms.

The yellow bolt fired. It went through Tommy’s right eye as it should have done before. Tommy stopped doing the wave. Zombies could only be stopped by a head shot.

Frank slumped, sliding off the steamer trunk. Frankie screamed with joy. Both of them reached for the fallen Almond Joys, lying there in the golden light of morning on a beautiful fall day.

“And for the rest of you yellow duckies,” said Frank out loud while Frankie unwrapped a bar, “no Almond Joys for you. They’re all mine. Man, I do love coconut.”

Posted at 09:00 AM in Short Stories | Permalink