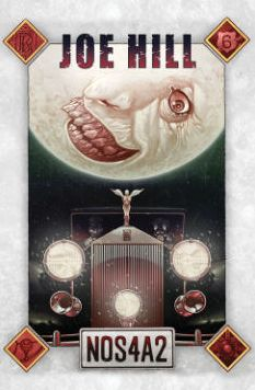 It's ironic that the real monsters of our world often defy explanation, yet in fiction we often demand and often relish knowing their histories. Those histories are always filled with poignant experiences, traumatic events, and possibilities never achieved. Told well, you find yourself fearing and hating the monster while feeling sorry for it. Or him.

In Joe Hill's The Wraith, the history of Charlie Manx and the origin of his evil is told well, serving as the prequel to his novel NOS4A2. The 1938 Rolls-Royce Wraith is here, so is Christmasland and the "private roads of thought, where emotions are weather, blowing across the landscapes of your imagination." Manx calls these landscapes inscapes, and with a scared child listening in the backseat of his Wraith, he tells her all the sordid events of his life, beginning with his father who died in the arms of a fat lady named Sally Grapefruits.

Manx's mother blames him for everything bad in her life, of course, calling him names, treating him poorly. He never had a Christmas where Santa brought him a present so he bought a sled for himself called the fantom. Racing it down the slopes he notices the landscape changes and another world pushes itself through. A horrible event makes that world very angry and murderous, leaving 13-year old Manx free of his former, unsavory, surroundings.

Life perks up for him, briefly. He falls in love and gets married. He is wealthy. He is finally happy. He loses it all. His wife and children are left with nothing. Their carefree happiness turns to drudgery. His wife turns into his mother, calling him names, blaming him for, well, it doesn't matter really, since he's heard it all before.

What little cash he's managed to save is given to a traveling salesman selling dreams; and a place called Christmasland. He buys into the dream hook, line, and sinker. He even buys the Rolls-Royce Wraith to visit the amusement park for opening day. The Wraith comes cheaply, its former owner committed suicide in it, even if it was lightly used. A road trip to Christmasland with his kids and wife in the back seat turns ugly. The landscape he's known before opens up around him, swallowing them whole. The children lose their baby teeth.

But that was in the past. The story picks up again in 1989. Escaped convicts put in a call to Manx, now the go-to guy for making people disappear. He takes them to Christmasland to play with the kids, who welcome them, standing in front of a foreboding Christmas tree hung with ghoulish ornaments. And the kids are holding sharp, dangerous things, smiling in anticipation. I'll mention a balloon filled with delirium 101 is critical to survival for some, and you may catch a glimpse of the Bumble in all the mayhem, and leave it at that. Except for the payback, of course, there's always payback.

Joe Hill does more with his words than most writers of horror fiction today, which is why he can sell you, like Charlie Manx was sold, such a tall story that's part nightmare, part dreamscape, and mostly horrifying. His characters have befores, middles, and endings, and those endings can be very unpleasant, but their histories are ones you will relish. There may be a better artist to capture the glory and gory of Christmasland than Charles Wilson, but no one else comes to mind. Especially when he's "painted pretty" by Jay Fotos. The narrative and the art capture the murderous delights of Christmasland very well, while leaving enough room for emotions stretching beyond the necessary artifices of the story.

What we don't learn is what Christmas did to Joe Hill to make him want to turn its holiday of cheer into a holiday of drear.