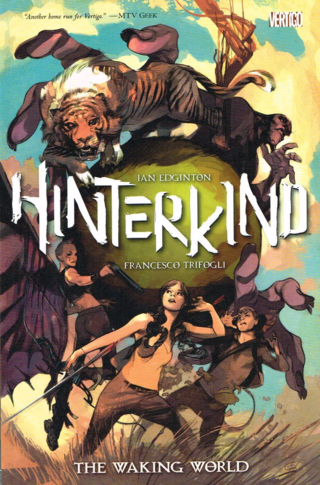 I'm not sure what the big ball in the center of Hinterkind: The Waking World's cover is, but I assume it's the globe. As in Mother Earth, which, once again, is in seasonal post-apocalypse after the "blight" has eliminated much of the human population. The survivors survive, huddled together in small communities situated in various cities. One by one, those communities are becoming unreachable over ham radio, so an adventurous doctor decides to find out why. His adventurous, and suitably rebellious, daughter decides to go after him. What starts going after them is what Ian Edginton and Franceso Trifogli's young adult comic series is all about.

The novel twist here, and it's a good one, is the eclipse of humankind leading to the repatriation of the hinterkind: elves, ghouls, bumps in the night, and all those hairies and toadies looking for human treats to eat. Former citizens of the globe, they were ousted by mankind. And boy are they mad about that.

If only Trifogli can be more energetic with his imagination depicting the hinterkind, and if only Edginton could shake up the usual genre predispositions more, like naming his valiant young female lead anything other than Prosper Monday, this series would be better than good.

This first six-issues compilation introduces Prosper, her male friend since childhood, Angus--he's got quite a tale to tell, himself--and the growing population of Sidhe (that's elves to you and me) and not so Sidhe (think Lord of the Rings and you'll get the idea). Prosper is idealistic, selfless, brave, and future-thinking. She also wields a mean bow and arrow. All of these are important qualities for all young adult women characters. Her male friend, Angus (okay, sure, it's Celtic in origin, but who names their kid Angus?), is trepidatious, more play-it-safe, yet still brave enough to accompany her, making him the ideal counterpart for every young adult woman character like her. Which would be all of them.

They set out, encounter a multi-armed troll on the bridge (Brooklyn or Manhattan Bridge, I'm not sure) and land into much hot water with the bad company they keep. That bad company may actually turn out to be not so bad, so room for relationship-growth and self-worth awareness appears to be on the table for later issues. On the other hand, some of that bad company involves a Frankensteinian horror undertaken by survivors deep in a military bunker, so Prosper and her compatriots may not last that long for us to see any growth. Of course there's the bad-ass female bounty hunter stalking them: she sports a mohawk, has purple wings, and carries a big gun. She's a combination of Mad Max and dominatrix fashion. Hopefully she'll prove worthy of more than her stereotype in later issues. But for now she's ideally suited to the task at hand: wreaking sinister mayhem.

The broader story potentially bridging this dissolution of humanity and the re-population of the hinterkind is carried by a future-thinking queen, her past-viewing and spiteful sister (who is oddly drawn with short, bristly hair that's distracting to look at), and a lot of hungry hinterkind in the middle of their power-plays. There's enough told in the first six issues, and enough purpose and direction shown as to what future events may transpire to interest further reading.

And hopefully, better coloration across the panels to set the mood. One gimmick I recommend dropping or rethinking its use is the narrative excerpts from the "First Book of Monday." It displaces the reader from the present with its repetitive, pontificating soliloquoy, and kills any tension: First Book of Monday equates to Prosper's diary? Yes! Great! So no matter what happens, she lives past the present calamities. Not so great to know that. I'd like a little more mystery than that in my young adult fiction. You know, we call it suspense.