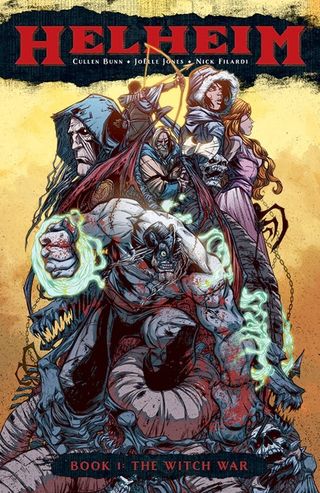 The draugr of Norse mythology takes center stage here with a nod to the Golem's protector modus operandi and Frankenstein's Monster's patchwork quilting of stitched body parts. Only here, Cullen Bunn and Joelle Jones's draugr is a giant pawn caught between two warring witches and their demon-play to best each other.

No reason is given as to why Bera, the beautiful witch, and Groa, the ugly hag of a witch (note how ugly witches always have names that imply ugliness, too), are feuding and decimating the countryside in the process. From the level of despair and desolation shown it's been going on for a long while.

The story places us in the middle of the conflict at the start, with a hunting party being hunted as they quickly return to their village with the wildmen in pursuit. An opening salvo of bloodshed and hacked limbs within their village gates reveals the ferocity and supernatural nature of their adversaries. When the handsome, brawny, Rikard is killed, Bera reveals her true talent by bringing him back to life. Larger and smellier than before and able to swing a mean axe, Rikard is now a hulking dead creature under her control. She sends him after Groa and her demon minions.

A puzzling question arises early on: why does each witch have a village of her own to fight for her, especially after all the constant turmoil and lack of food this incessant animosity is causing? Either Bunn is riffing off the historically important village idiot role (and one still prevalent today in politics, by the way) by twisting it around to one of a village witch role (which would be closest to the village savant role I'd surmise), or perhaps he's presuming we won't notice. Or maybe he's cleverly turned this whole village idiot role into a plural endeavor, implying that each villager is stupid enough to stick around, waiting to get killed in the crossfire, rendering an idiot village in effect?

Other plot-convenient assumptions let him jump through the issues of this collected series without applying effort toward providing explanation or illustration: for instance, Rikard has amassed an army of men, a hundred or so, to fight along with him by issue four, but in issue three he's alone, needs the help of a little girl to stitch his head back into one piece, and he still smells badly. How he amasses an army of men to follow him is anyone's guess, but he instantly has one by issue four.

Helheim: The Witch War has a Van Helsing vibe to it. If you just accept it and don't ask questions, or don't bother to think too deeply as to whys and wherefores, it's an entertaining horror story that makes less sense than it ought to, but still provides some good scenes and moments. But if you're pigheaded and need more flesh to the motivation-backbone of your storytelling, just remember the good thing is this is only volume one. Assume that volume two will flesh it all out better and you'll be fine.

If you can wait for volume two, that is.