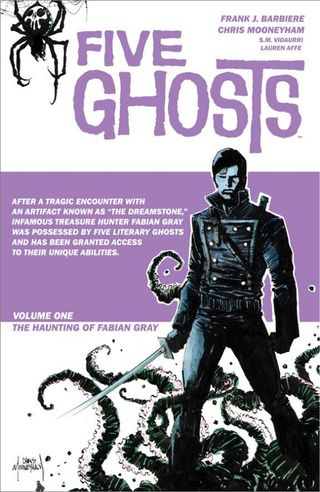 Fabian Gray is a man possessed with both a mission and coterie of five ghosts: the wizard, the archer, the detective, the samurai, and the vampire. As you would imagine, this gives him a leg up--or ten legs up?--above and beyond his usual tenacious and resourceful self.

These wonderful reasoning and fighting abilities channeled through the ghosts were given to him by the Dreamstone, an ancient artifact--let's be polite and just say--he acquired . So what if Fabian Gray isn't all that clean and proper in his background? His ethics now seem to be on the up and up, so that counts.

But there are always complications when great power belongs to one man and others would have at it for themselves. Coming after it, and Fabian, are dark forces led by the devilish-looking Iago, a few big nasy spider-god things and their determined worshippers, and, as one character lays it out for him, "as with all things Mystical, there is a risk of danger."

But of course. Cue the drama. The Dreamstone itself is becoming a dangerous burden. Fabian needs to prove he's worthy to wield such power or it won't allow him to keep it. Isn't it annoying how that always winds up being the case?

Frank J. Barbiere's story is old-time movie serial paced (for you younger fans that means it's a lot like Indiana Jones in characterization and style), and the artwork is the Joe Kubert school of action and outline as energized by Chris Mooneyham. This team-up works hard and well to deliver the blow by blow encounters and the compact panels to build to a satisfying climax that leaves the door open for more rousing adventures.

And before I forget, there's the big eye-glasses wearing, steadfast but reluctant, why-do-I-continue-to-hang-out-with-you sidekick to provide contrast and levity throughout in key moments of terror. A dip in the purity pool for Fabian to fight old guilt demons rounds out his mysterious past, and a continuing thread to bring salvation to his sister promises there will be a mission within each mission goal to sustain the series.

Given all this, I'd say Fabian Gray easily has more than a ghost of a chance for adventuring onward.