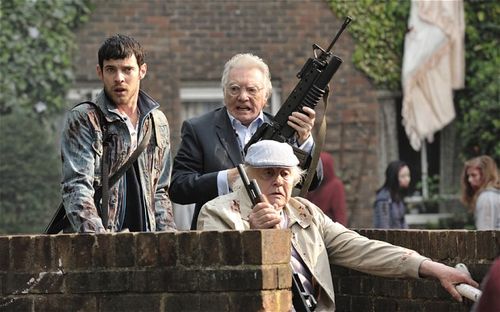 Sometimes a zombie movie is just a zombie movie. It's at those times that a zombie movie can be most entertaining, too. There are no metaphysical inflections, no religious thought-munchies, no ulterior sociological or political motives to be plumbed, or character digressions to be dissected in Cockneys vs Zombies; just a lot of hot and heavy guns, grenades, fiesty old people, motley younger people, and lots of ravenous zombies to mix it up with, which director Matthias Hoene does with lively gore and cheeky zest and lots of ammo. The heavy weaponry and unlimited ammo supply is provided by Mickey (Ashley Bashy Thomas), the metal-plate-in-his-head, sanity-challenged, neighborhood thug who keeps his stash in a cargo container. A large cargo container.

The zombie menace begins when an East London construction crew unearths an underground vault. On the stone door is written "sealed by the order of King Charles II." They open it. Among the hundreds of skulls and skeletons and rats are a few lively corpses. Let the bloody mayhem begin.

As the outbreak spreads, two brothers (Harry Treadaway and Rasmus Hardiker), unaware of the growing menace (and in general, not very aware of their future prospects whatsoever)  want the local bank to chip in to help save their grandad's (Alan Ford) nursing home, the Bow Bells Care Home. They enlist the aid of Davey (Jack Doolan), a not so good alarm tech specialist who gets caught a lot: Katy (Michelle Ryan), a looker added primarily added to the script so we would keep looking (especially when she carries her handgun in her butt-crack); and Mickey, who we already know is bonkers, but still well-equipped with the hardware needed to heist the bank. What could go wrong?

It all goes wrong as the zombies close in and the gang that shouldn't rob banks and the old folks at the home (Honor Blackman among them) need to survive the onslaught. And try to wake up Hamish, who's hard of hearing and sleeping in the back yard that is filling up with zombies. The brothers have guns, the old folks have walkers. This is possibly the first time in a zombie movie we learn who is faster: an old man in a walker or the shambling George Romero-styled zombie chasing him.

Moving back and forth between the dire predicaments both brothers and the Bow Bells Care Home  occupants find themselves in, the script isn't as witty as Shaun of the Dead or Zombie Land, but is as much fun to watch. The make up effects lean toward wet and messy, with a little CGI added to punctuate head removals, close proximity gun blasts to appendages, and de rigueur  intestinal slurpages. In dispatching one zombie chomping down on a fresh forearm, a shotgun blast to the zombie's face leaves its lower part still firmly attached to the victim's arm; for a long while, which is gross but funny, and that's par for the tone of the effects.

The brothers eventually figure out how to rescue the old folks trapped in Bow Bells, but wheelchairs and walkers are a burden. Lucky the zombies are slower than the old people. But there are still a lot of them. And a lot of guns to go around. And a very sharp Samurai sword to swing for a bloody good time.

Thanks, but I'm still learning, too. (I just added your blog to Feedly and will be following your posts.)

When I read your review, I realize I have a lot to learn. Thanks for the great read.