They Tore Down Paradise...
And the Movie Theaters of Our Dreams
Part 4

With the kind permission of Brian Bukantis (Arena Publishing) and the author Dr. Vollin (Freddie Poe), I'm happy to be able to reprint Dr. V's article, They Tore Down Paradise...And Put Up a Parking Lot, which originally appeared in the May issue of Movie Collector's World, No. 683, 2005. Here's Part 4. 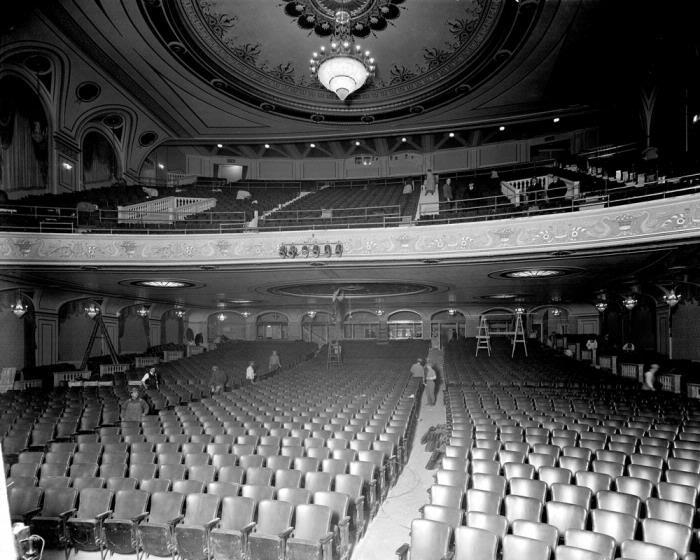 Did you know that in 1957 90 million patrons a week attended the movies.
In 1967 that number dwindled to 2 million.

In 1942 there were more than 16 theaters operating in Worcester: these included the Poli Palace; the Plymouth; the Strand; the Capitol; the Worcester Theater on Exchange St; the Pleasant; the Crystal on Trumbell Street; the Elm Street; the Regent on Elm Street; the Family; the Rialto; the Bijou on Millbury Street; the Court on Lincoln Square; the Vernon; the Columbia; the Royal, and the Gem. By 1966, only the Loew’s- Poli, the Warner, the Fine Arts, and the Phillips were still in operation. The rest had closed for good or for renovation. In 1977, only three remained open in the downtown area: the Showcase (Poli); the Paris (Capitol); and the Fine Arts (Pleasant Street Theater),with the latter showing foreign art films. Today, only the two “art” houses are in operation and possibly not for long.

Long gone are the days when you walked to the local theater to look at the posters to see what movie was coming next. A movie in those days was changed about every two weeks or so, unless it was a blockbuster and was held over, in which case a movie might stay indefinitely, or until everyone had seen it at least twice. Gone are the days when for one admission you could stay all day and see the movie as many times as you like. Gone,too, are the long lines extending around the block, causing empty neighborhoods on weekends because everyone was downtown at the movies. And gone were the double features, the spook shows, cartoons, and the newsreels, along with the ushers, the giveaways, and the cheap popcorn. Long gone is the classic movie, too.

When I was about 5 years old and not old enough to wander Front Street by myself, my father would have one of his dishwashers, George, take me to the movies. George was known around Worcester as a hustler and a con man of sorts, but not violent in any way;  just a fast talking guy with a lot of stories. If George asked you to borrow a $100 bill, in about 5 minutes you’d be gladly handing it over to him, and 10 minutes later you’d be asking yourself why you just did that. If my father gave him $2 to take me to Woolworth to buy me a monster model, George would say to me “nevermind those monsters, how about some nice Matchbox cars?” because Matchbox cars were much easier to put in your pocket. George would then get to keep the $2, which bought about 6 beers back then. Well, no dastardly deed goes without some kind of retribution and George got his on more than one occasion. Which brings us to the tales I am about to tell you.

Pollyanna at the Warner

My dad gave George some money and told him to take me to the movies. If my memory serves me well, it was to see Pollyanna at the Warner Theater, so I would estimate my age at about 5 or 6 years old. On the way to the Warner George must have seen someone he was trying to avoid, so we crossed Front Street. As we passed an alleyway, out popped a man.

“Georgie boy, hey I’ve been looking for ya.”

“This will only take a second. Come down here,” said the man, indicating the alley. This is in broad daylight mind you.

I watched as the man led George down the alleyway, and after a few choice words started beating George about the face and head. I stood frozen with fear, watching this for as long as it took. It must have only been a few seconds but it seemed like a long time. George emerged from the alleyway holding his handkerchief (remember those? yeechh) to his bloodied face. I looked up at George and said “George? Why did that man hit you?” He looked down at me, bloodied and beaten. “Don’t worry little buddy, he was just kidding around. That’s a good friend of mine.”

We headed down Front Street to the Warner, George holding the handkerchief to his bloody face and me checking on him every step of the way, horrified.

Pinocchio at the Poli

Pinocchio is my all time favorite Disney movie, maybe because he was an Italian. It was playing the Poli Palace and I asked my Dad if he would take me to see it. My father really never took me anywhere after he bought his restaurant in 1960; rather, I had male "nannies” and George was the main one. George, while being totally devious, was also one hell of an educator and always pointed me in the right direction, despite his own shortcomings. Anyway, we headed off to the grand old Poli Palace to see Pinocchio. We got there a little early, which gave me plenty of time to ogle the posters, get some snacks, and find the best seat in the house. I always liked to sit close to the screen, not in the first row but certainly in the first 10. George always let me pick out the seats. We sat, awaiting the cartoons, when a heavy set woman wearing a Carmen Miranda-type hat sat down in front of me. I don’t think it was a fruit bowl but it was certainly a flower basket. “George. I can’t see,” I said “Don’t worry pal, she’s gonna take her hat off when the movie starts.”

The movie started but the hat never came off.

“I’ll take care of this right now little buddy.” George leaned forward in his seat. “Madame. Could you kindly remove your hat, please, my little buddy can’t see the movie.”

The woman shrugged hers shoulder and made some kind of inaudible sound. “George. I still can’t see.” George tapped the woman on the shoulder a second time. “Madame. Kindly remove your hat. My pal can’t see the screen. I’m sure the movie means more to him than it does to you.”

“George, I can’t see. Can we move?” By now I was willing to sit elsewhere.

“We are not moving little buddy, we were here first. You only get three strikes in baseball and then you’re out of the old ball game. I’ve asked twice like a gentleman and now I have to take drastic action.” George leaned forward again. "Madame! I’ve asked you twice like a gentlemen to kindly remove your hat. My friend cannot see the screen! Three strikes and your out of the old ball game!”

Still the woman ignored George’s demand.  He jumped out of his seat, ripped the hat off the lady’s head, and threw it like a frisbee across the Palace floor. It landed somewhere in the orchestra pit. The lady sprung from the chair, screaming bloody murder at the top of her lungs. Everyone in the theater was now staring at us. Within seconds the manager (Johnny Dee) came to see what the commotion was. Naturally, George knew the manager and we got moved to a different section instead of thrown out. I swear this is a true story, as I wouldn't want my nose growing any longer than it is. Thanks for everything George. Rest in peace, pal. 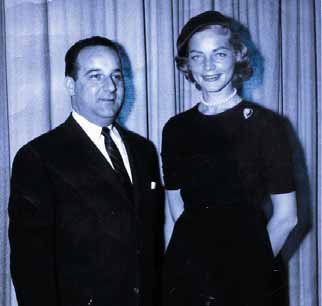 John DiBenedetto was born in New Haven Connecticut on September 28th , 1921. In the mid 1930s, as a teenager, John was working at the Armstrong Tile Company in West Haven. He soon came to realize that factory work was not only hard labor, it was also dirty, but the country was recovering from the depression and decent paying jobs were hard to get. John started to think about what else he could do for work.

It was around this time he began his career in the movie theater industry, greatly influenced by his brother’s friend who was a theater manager in the Loew-Poli chain. When John would go to the movies, he would see this young man, neatly dressed in suit and tie, cordially greeting the patrons in the lobby, which, in those days, was an integral part of the job. This scenario impressed young John and he applied for a job as an usher.

In 1939, after serving his apprenticeship, John received a promotion to assistant manager and was placed at a Bridgeport Loew-Poli theater. He had found his niche. In 1940 he was offered a chance to advance to a managerial position in the Loew-Poli chain, but he would have to pack his bags and relocate to Columbus Ohio. John did one year in Columbus as manager, but he missed his family and longed to be back in New England. In 1942, the Loew-Poli chain then offered John a new position managing the Loew-Poli Palace in Worcester, a position he would hold for the next 37 years of his life. 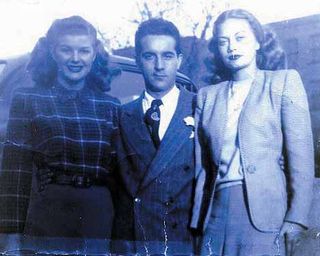 John would stay on as manager of the Palace until 1979, even though the theater was sold to Redstone National Amusements in 1966. Affectionately known to many Worcesterites over the past four decades as Johnny Dee, his reputation and popularity are evident through searching old newspaper files and library archives. I was surprised to see how many times John’s picture was in the newspaper and how much weight John’s word carried around the Worcester movie scene. Johnny Dee was often pictured rubbing elbows with the stars and other Worcester notables.

Here is an excerpt from the Worcester Telegram And Gazette quoting Thomas Meehan (later went on to be a big time politician in Providence, Rhode Island), who was a theater manager in Worcester from 1912 to 1932:

Johnny Dee has a great reputation in showbiz. John is the type of guy who would have made it big in the old theater days (pertaining to the Vaudeville era); he can take responsibility, he shows good judgement and great showmanship, and he knows the people in his community. John has a great reputation across the country, he’s a good man.

This was just one of the many nice things said about Johnny Dee. Naturally, after meeting him, I was eager to hear stories about the good old days, the people he had met, did he save any memorabilia from the Poli?, and especially, what he thought of today's movies. John is still as gracious and sharp as he’s ever been as he told me the things I was anxious to know. 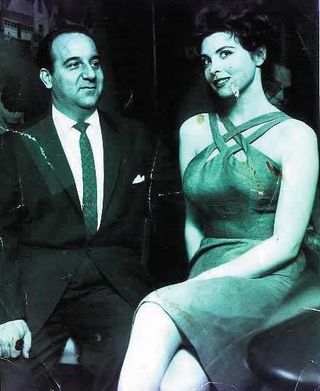 First, I was eager to know what Johnny Dee thought about today's movies. He admitted to me that he had not been to the movies in years. The last time was to take his grandchildren, and that was some years back. He said he would rather watch the old classics on Turner. I couldn’t have agreed with him more. I seldom go to the movies myself.

I asked John “Who was the most impressive movie star you ever met?”

Posted at 09:42 AM in Reflections | Permalink