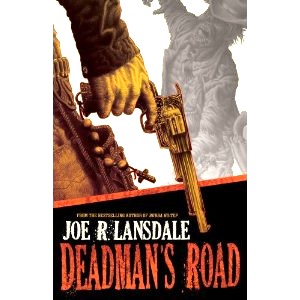 Some authors are bumps on a log while some examine those bumps, while still others just sit on them and write up their stories. Then there are those authors like Joe R. Lansdale who insist on turning the log over and stomping on the crawlies squirming around underneath for inspiration.

Lansdale's inpsiration doesn't reach for the sky in Deadman's Road, just for the zombies, werewolves, and Chthonic monsters Preacher Jebediah Mercer and his modified .36 Colt Navy revolvers go gunning for. The tallest drink in this bunch of weird west tales is Dead in the West, where the preacher comes up against a dusty town whose dirty deeds come back to bite the townsfolk. Hard.

Lansdale’s hankering for sullied characters and his disposition to muck up their trails as they wind themselves around them doesn’t follow Gene Autry’s Cowboy Code of Conduct much, so don’t expect any white hat truisms or dainty ladies with frilly white parasols waiting for doors to be opened for them; think more along the lines of Lansdale as Rob Zombie, only Texas-sized, to size up his approach to the wild west and its imagined horrors.

For starters, Jebediah Mercer’s no saint; he doesn’t preach the word of god nor cares to, and he’s definitely not interested in saving souls. And more than likely, in fact, the odds are you’d best be planning your own funeral should you find yourself by his side for any length of time. His horses don’t fare very well, either, so he winds up hitting the trail on foot more often than not. But his aim is wicked good and his pocket bible’s pages provide for a potent weapon against evil monsters when he tears them out. For a man who thinks god's running both Heaven and Hell and enjoying the mischief the latter's tenants are carrying on with more than the former, it's surprisingly effective how Lansdale handles Jebediah's insouciance to the celestial plane: Jebediah doesn't care, doesn't give a damn, and yet doesn't give up, for whatever reasons you or I might attribute to him. This minimalist approach to character-building creates a vacuum ripe for inference, which is one of Lansdale's inherent talents with writing his characters, especially Jebediah Mercer: what he doesn't say or do is more interesting and revealing than what he does say or do. And what he does best is fight monsters, although his luck at survival, even though he really could care less for one outcome or another, comes into play more often than not to save his hide.

Saving others isn't one of his strengths, however. In Dead in the West he gets in the middle of a wronged Indian Medicine Man and his wife and a town that went loco one night. One spidery demon and a lot of walking undead later he's fighting for his life, and for those of his newfound friends, against the corrupted townsfolk who have preacher and said friends holed up in the church, which is quickly becoming unholy ground. In the second story, Deadman's Road, Lansdale fleshes out Jebediah's inner workings and the landscape around him.

The trail he rode on was a thin one, and the trees on either side of it crept toward the path as if they might block the way, and close up behind him. The weary horse on which he was riding moved forward with its head down, and Jebediah, too weak to fight it, let his mount droop and take its lead. Jebediah was too tired to know much at that moment, but he knew one thing. He was a man of the Lord and he hated God, hated the sonofabitch with all his heart...and he knew God knew and didn't care...

That landscape involves transporting a prisoner along a stretch of road haunted by a cursed monstrosity that was once human but not at all humane. Crumpled pages from Jebediah's pocket bible are used to create an impassable circle of protection, and silver bullets, because "sometimes it wards off evil," do come in handy this time around. Moonlight, a supernatural brawl in a derelict cabin, and Candyman-like bees provide a chilling shine.

In The Gentlemen's Hotel, the preacher comes up against werewolves that have eaten their way through the town of Falling Rock. With the assistance of a ghost to provide the backstory, and a saloon gal to provide the oak handled parasol, the atmosphere is tense and the werewolves thick. Lansdale tosses in a little shapeshifting action to spice up the action.

The Crawling Sky is the most Lovecraftian in context, but you may be hardpressed as to what's worse: the horror from the well or the "rip on the forest" town of Wood Tick's inhabitants. They'd give Innsmouth's fishy folk a run for their money even if Wood Tick's just got plain old unsavory folk. Lansdale's Necronomicon-like book, The Book of Doches, is used by Jebediah to figure out what's devouring mules and families. Again, classic pulp-horror elements are brought into play to build the eldritch terror, bring it home--literally--and fight it off.

The last story takes place near and in a mine, and 4-foot troll-like monsters are as much silver-happy as the unhappy miners trying to get to it. Much ungentlemenly behavior is engaged in and Jebediah manages to keep his horse and acquire a traveling companion at the same time. Although she could use a bath. The traveling companion I mean. We also get a glimpse into how practical and dead sure the preacher can be when one unlucky fellow warns he'll get even with him later. Jebediah figures why wait and shoots the varmint dead away saying "do not announce your intentions, I am a man who takes them to heart."

This is one weird western series you can take to heart, too.

An advance reader copy was provided for this review.