Not a horror movie, but the man against sharks illustration is still terror-packed in this Mexican lobby card for The Sharkfighters (1956). 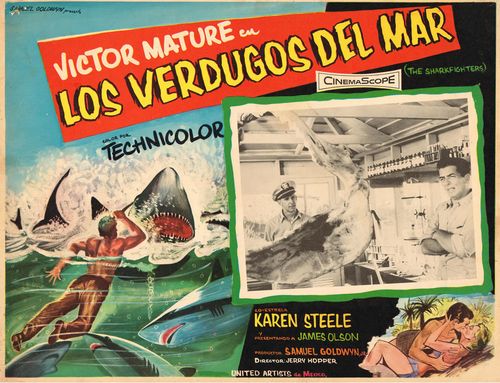 Every decade's worth of movies has its Jar Jar Binks kind of misguided character design. Here's the pressbook for The Giant Claw. And you thought Jar Jar was funny-looking. 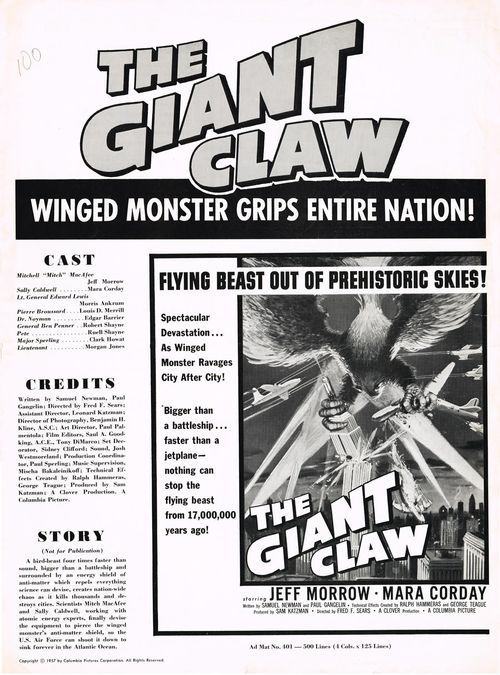 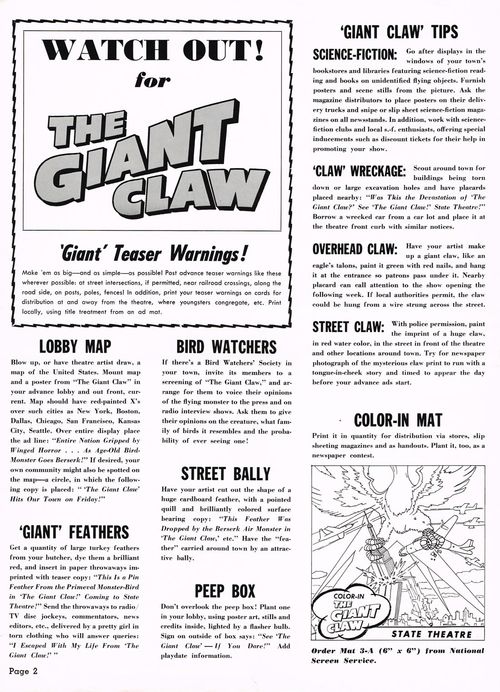 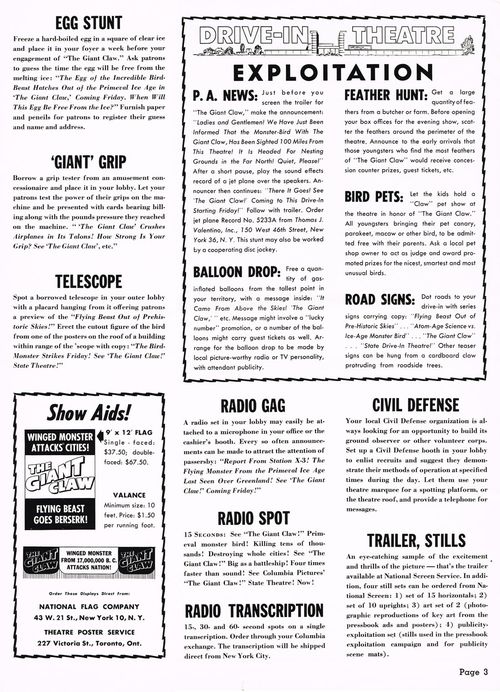 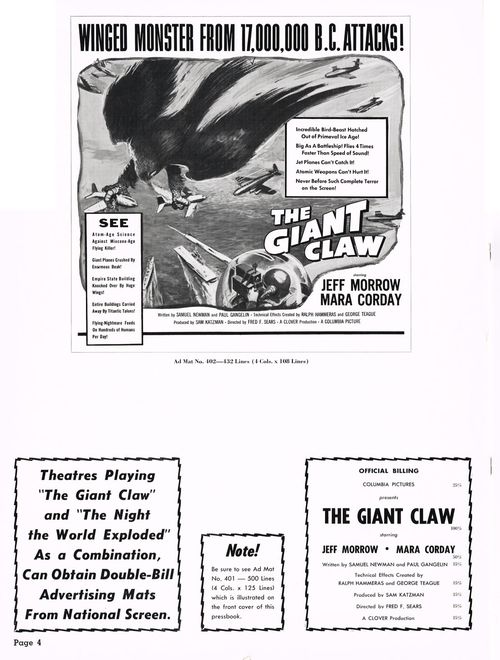 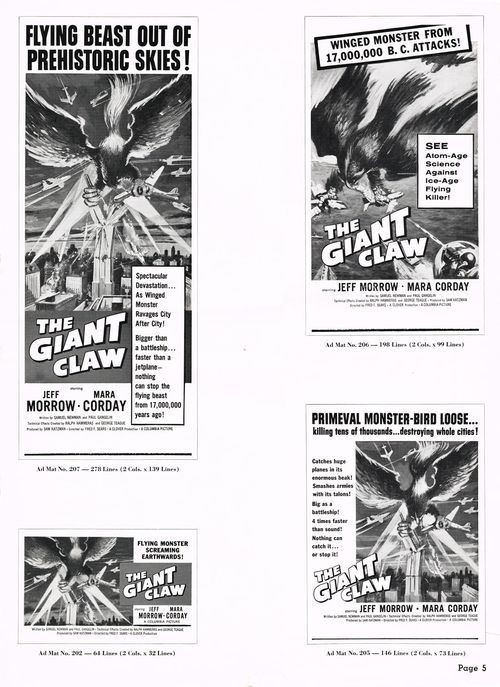 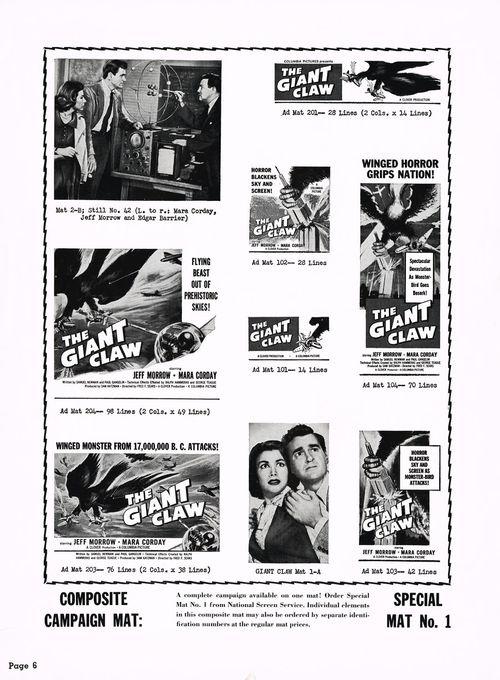 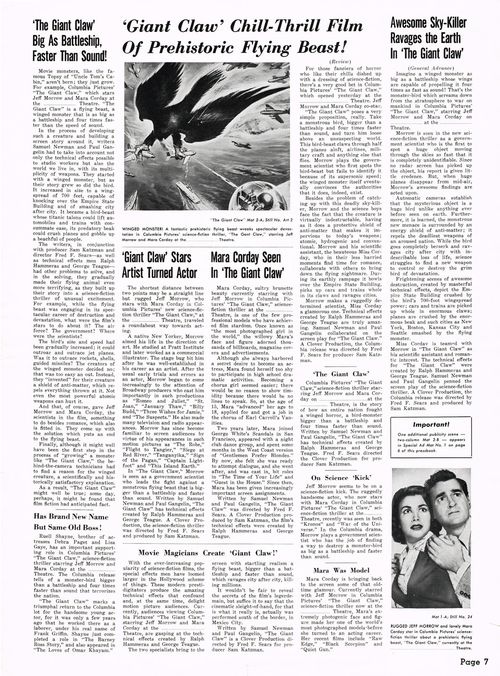 And I bet you thought Barbara Bach was only the Bond Girl, didn't you? 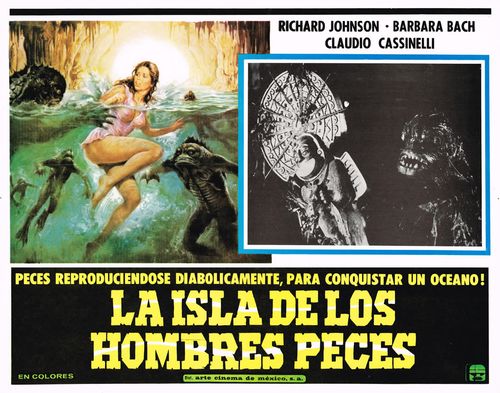 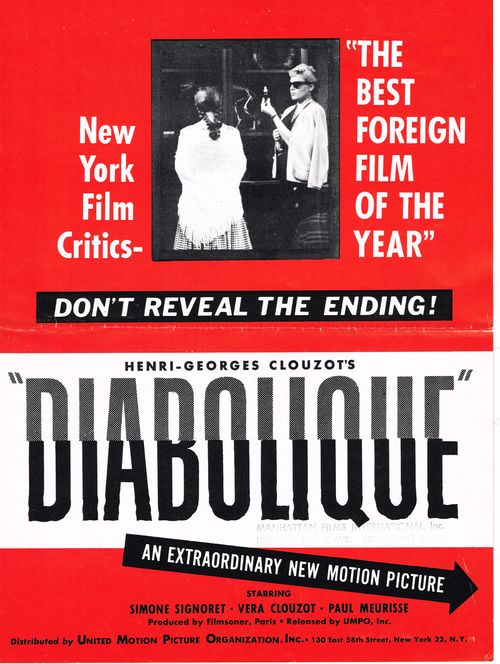 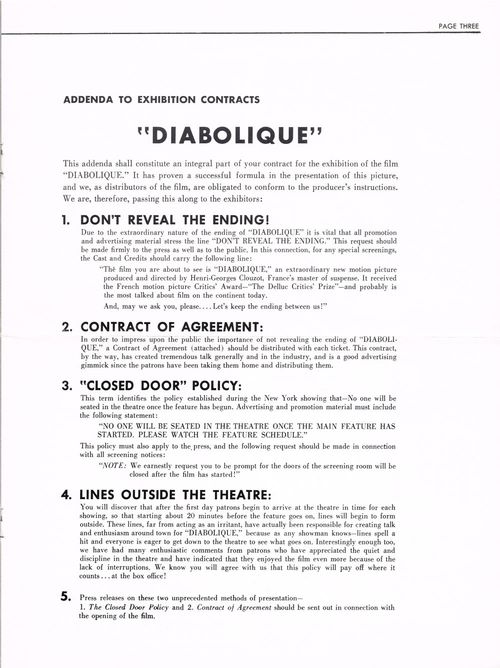 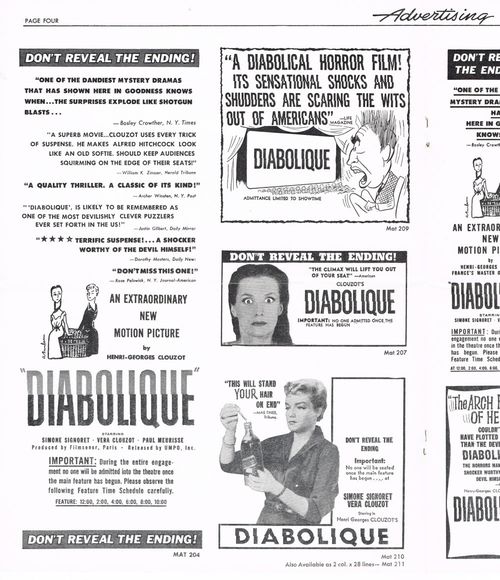 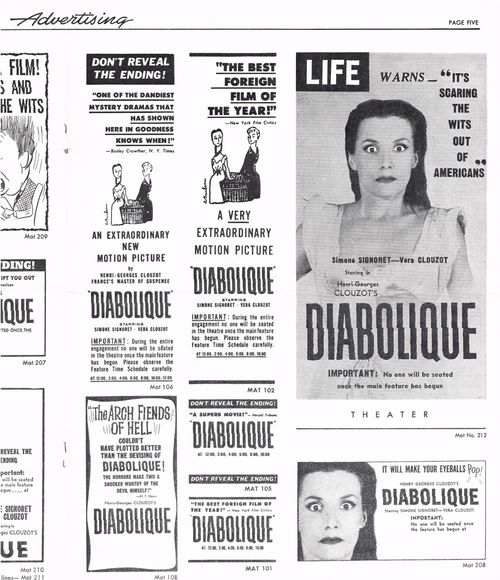 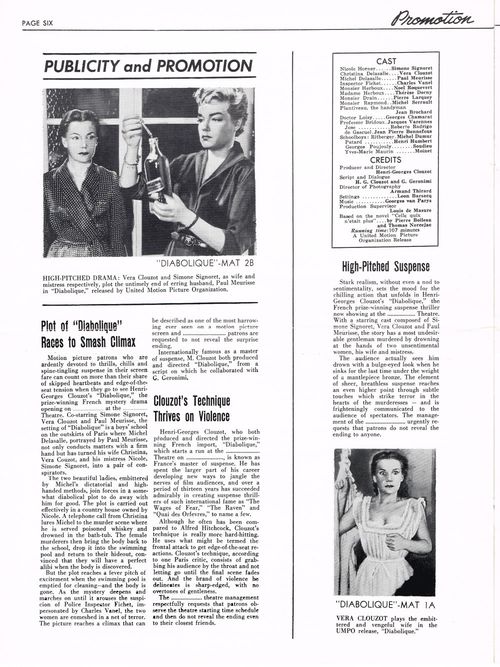 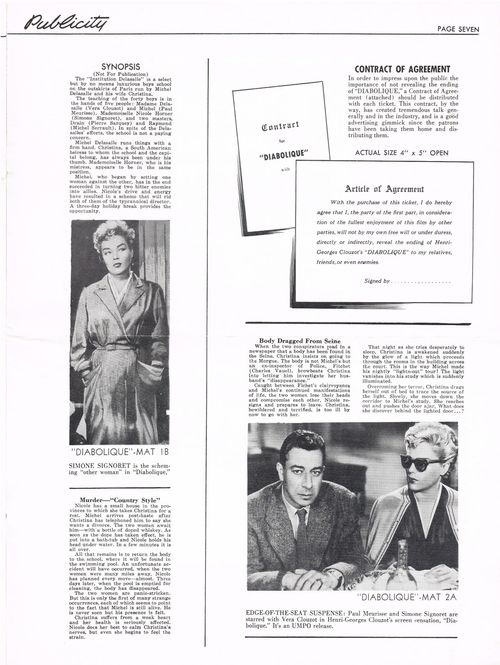 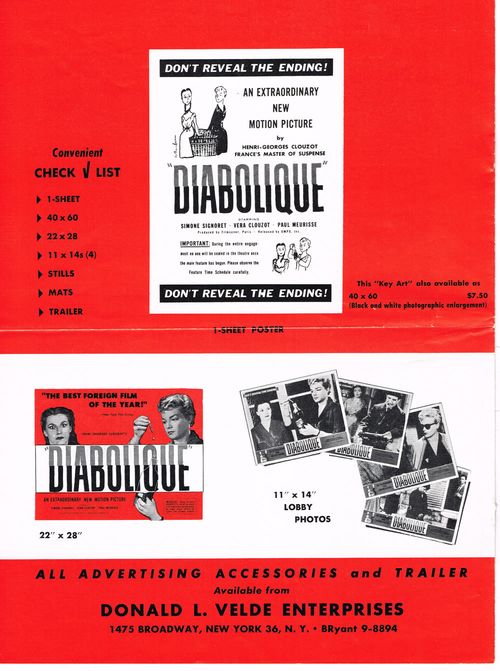 Striking profile images of an aging Bela Lugosi and Boris Karloff, against a colorful landscape of pastel tombstones and a hanging man swinging against a fiery sky, highlight this Mexican lobby card for The Body Snatcher (1945). 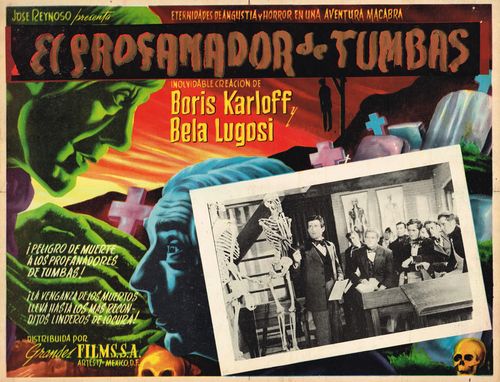 This Mexican lobby card for La Danza Macabra (Castle of Blood, 1964)  resonates with murder and ghostly frights. There's a little Charles Addams in the key illustration of Barbara Steele and the others standing in front of  the ominous moonlit mansion: reminds of the Addams Family cartoons. 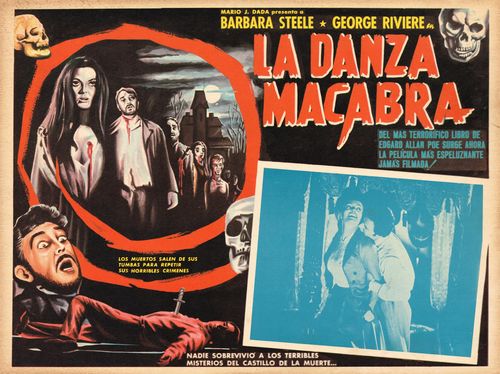 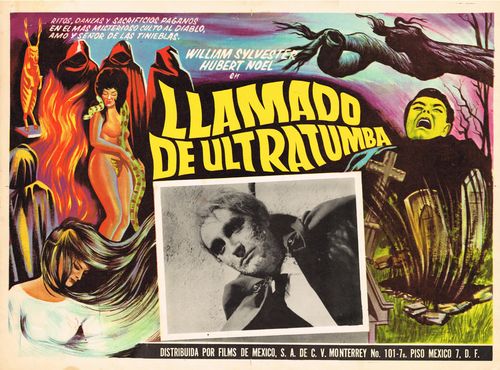 Graphic Book Review: I, Vampire Vol. 2
Rise of the Vampires 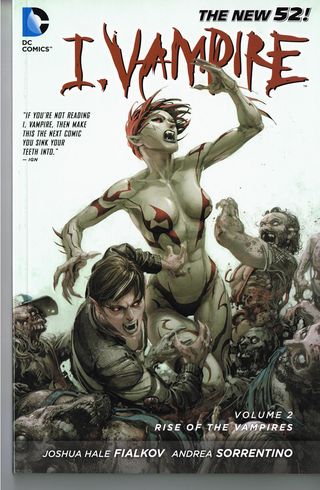 I'm not a big fan of artists who draw people with the same facial features, slightly altered, for every non-masked character, and who fill panels with heavy dark lines and even darker spaces. Remember the big-head makeup artist on Face-Off? He bored the judges because his makeups kept reverting to big-headed sculpts, so they looked the same. I was bored with Admira Wijaya and Daniel Sampere's art in the same way: too dark, obscuring detail without lending depth to the scene, and everybody looks like a cousin to everyone else. Except for Batman and Batgirl; they have masks.

What they also have is the same tired fists-and- wisecracks response in the face of supernatural catastrophe. Even John Constantine seemed bored by it all. Peter Milligan's dialog and story flow was like every DC Comic issue where "real" superheroes hook up with the occult fringe: predictable encounters filled with quips from caped crusaders who are out of their element, and the eventual reliance on some astral zones-worth of cosmic assistance, given with a brief show of reluctance, leading to ambiguous results (you know, the cop-out ending).

Did I mention I'm pretty bored by all this nonsense by now? At this point I'm thinking What's all this "next comic to sink your teeth into" BS from IGN quoted on the cover? When I turned to Fialkov's and Andrea Sorrentino's issues contained in this second volume, I got it. My recommendation is to breeze through the  Justice League Dard issues, 7 and 8, and focus on the real deal, I, Vampire issues 7 through 12.

I reviewed the first issue of I, Vampire favorably because of Fialkov and Sorrentino's efforts, and these later issues headed by them show more maturity in the execution of characters, the panel-world around them, and the sticky situations they antagonize. After Cain works up all those vampires into a feeding, bleeding frenzy, shifting gears on them by moving them from Gotham City to Utah to go cold-turkey does provide enough tension to spill over into bedlam soon enough. The Van Helsings show up for a fight and they've got a nifty new tactic: resurrection. Andrew Bennett's shell-shocked sidekicks get in on the action, with the usual "more than they bargained for" portion of hurt. And even Mary, Queen of Blood, faces a new challenge.

This New 52 version of the House of Mystery's I...Vampire shifts the storyline to vampires who can stand in the sunlight, but are weaker for it, and have the ferocity of those blood-suckers in 30 Days of Night. Andrew Bennett is also much older, though youthful in appearance (as is everyone in the New 52 Universe). This series is ending in April with I, Vampire issue 19, so look for volume 3 soon thereafter.

A courtesy copy was provided for this review from the publisher. 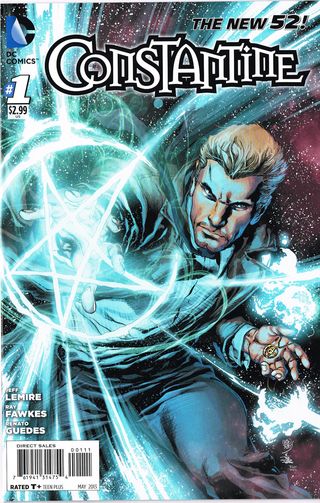 After a few hundred issues bollocksing about in Hellblazer, DC reboots a New 52 inspired John Constantine, after retiring his demon-tired bones in a lacklustre and poorly drawn finale (Hellblazer No. 300).

Constantine No. 1 brings a more youthful Constantine into the DC Universe and Renato Guedes art, which accentuates camera-angle panels showing Constantine at his best and worst--a normal day for him in the world of magic and shadow he walks in.

But Constantine is now in New York City, with spiffy new occult digs, down the stairs in Dotty's Pet store. His double-breasted trench coat looks less rumpled (more Prince than Columbo), his hair more fashionable, and his demeanor less like a cigarette aftertaste and more like a Jack Daniel's sipped over ice with a Heineken chaser.

Ray Fawkes and Jeff Lemire have a good handle on the bitter and the sweet of it, but make no mistake, this Constantine is more movie-ready, less foul-mouthed, and, so far, less British. You get the impression he went through the New 52 cleaners instead of his trench coat.

What remains the same is how he handles dire situations by relying on friends and close associates. Readers familiar with the death toll around Constantine know what getting close to him means to any long term relationships. That's where his morality comes into question, and it's a question that propels his old, and now, new series of trials and tribulations with black sorcery, Heaven, and Hell, and all those nasty, black squiggy places in-between points North and South. 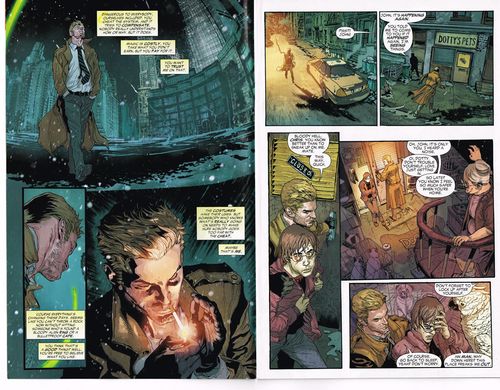 At 20 pages, the setup brings into play an evil cult (aren't they all?) called The Cold Flame, an old acquaintance best forgot, and Constantine playing the odds, which always seem to fall in his favor--to some degree. This first installment of The Spark and the Flame is tight, neat, and delivered with as much assurance as even John Constantine can deliver.

And he still smokes. Let's hope New York City's Mayor Bloomberg doesn't notice, otherwise Constantine may have to face a real foe even he can't conjure away.

A courtesy copy was provided by DC Comics for this review. 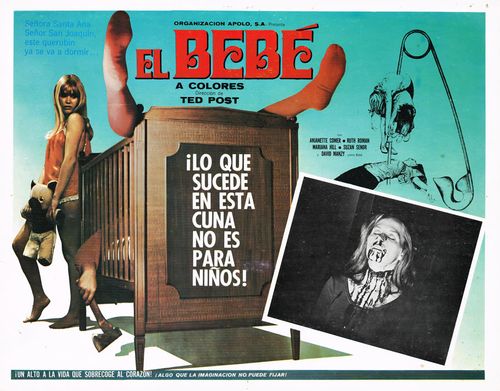 Why do apes and ape-like monsters always go for the girls? Just asking. It's staggering how many gut-wrenchingly bad movies John Carradine acted in. He deserved better. This Mexican lobby card for Bigfoot (1970) at least promotes the King Kong tie-in (although there isn't any), and highlights  the proper way a monster should carry a girl: over the shoulder; the arms tire too quickly, no matter how big and hairy you are. 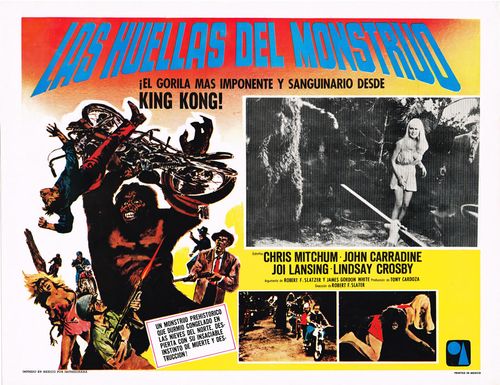