Interview: How to Collect a Monster's
Dr. Vollin, MD Speaks! 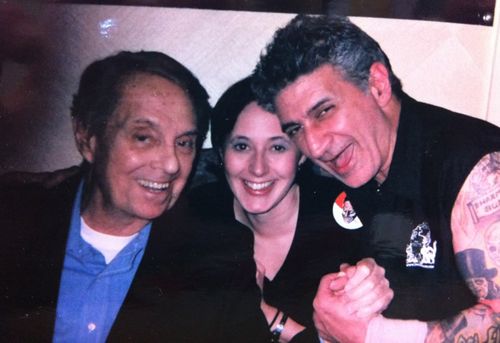 For over 10 years Dr. Vollin, MD (aka Freddie Poe) has been sharing his monsterkid passion with fellow enthusiasts through his column, How to Collect a Monster, in Movie Collector's World magazine. All good things, as the saying goes, and MCW is one for posterity. But the good doctor still makes house calls and Zombos invited him over for a chat.

How did you come to write your long-running column, How to Collect a Monster, in MCW?

I was an English/Theater major back in my college days. I did lots of stage acting and wrote my own plays, some of which were produced here in Worchester, Massachussetts. I also wrote poetry, for which I won contests, and got to read my poems at the Worchester Public Library. 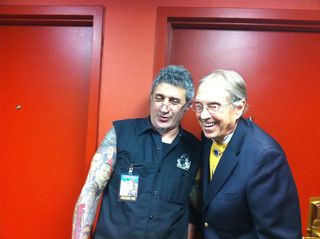 When I started re-collecting movie memorabilia (I had an earlier collection in my teens), I was looking to write for some of the monster magazines. I thought they were pay jobs, but soon found out most genre writers do it for the love of it. The stuff I was writing was about chasing down movie posters, the hunt, etc, so I didn’t really fit into Scary Monsters, Monsters From the Vault, and the others.

I hooked up via the Internet with PJ Angel of Pocatello, Idaho, and we began my column “How to Collect a Monster from the House of Poe” on PJ’s Planet Mopo movie poster site. About a year later I submitted an article called “Universal Scream Queens” to Movie Collector’s World magazine. Brian Bukantis loved it and it went to print in 2002 (or maybe it was 2003). Brian got such a great response to it that he asked me for more. I already had stuff from Planet Mopo, so I submitted more articles to MCW.

From there we just went monthly. I did the column from 2002 to 2012. Brian had me take a few months off here and there so I wouldn’t burn out. Unfortunately I ran into health problems and stopped writing in 2012. MCW continued another six months or so without me and then called it quits in 2013. The magazine was certainly a staple to the hobby and will be missed. Brian Bukantis sacrificed a huge slice of his life for that magazine. He is a great man. He is my brother.

What are the high points that stand out for you from the many interviews you've conducted?

That’s a tough one. There have been so many. Definitely hooking up with the great Harry Wise, Spook Show Master and Magician Exraordinaire! Harry was my brother of another mother. Our relationship didn’t end with the interview. We talked everyday for 5 years before he passed away, just when I was on my way to Florida to finally meet him in person. It was a great loss to me. Harry was like my Dad.

Another father figure for me, and a great interview, was with local, forty year theater manager, Johnny “Dee” DiBenadetto. The man was a plethora of movie knowledge. He rubbed elbows with all the big names of the era (1940s to 1980s), including Jayne Mansfield (I have an 8 x 10 still of the interview). 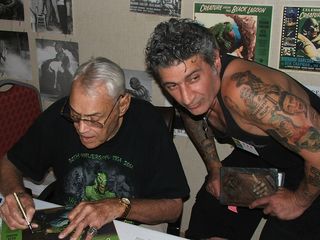 And the Yvette Vickers interview led to a long friendship with many a late night phone call until her horrible death a few years ago. Ben “The Gillman” Chapman was another dear friend of mine. Benny and I had a special relationship. He was my party buddy at conventions. I really miss Benny.

Being invited to Carla Laemmle’s 100th birthday party at the Egyptian Theater in LA was another unforgettable event. At that time I also got invited to Ron Borst’s house to see the greatest collection of monster movie memorabilia on the planet! Bar none! 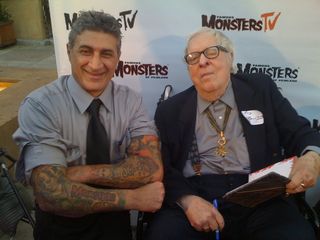 Meeting Ray Bradbury was another high point.  I said "Ray! want to see the real illustrated man?" and then I showed him my monster tats which include a portrait of Forry and the quote "sci-fi is my high," and Ray said "bless you my son". Imagine being blessed by the greatest sci fi writer of all time. I can take that one to my grave!

There are far too many highpoints in my ten years with MCW to mention, but they all hold a special place in my heart.

How did you become a monster kid?

This is an easy one. My mother was a movie fanatic. She let me watch Frankenstein on Shock! Theater in 1959, on a Saturday afternoon, and that did it. When it became an obsession for an impressionable five year old like me, my mother called the family doctor (they made house calls back then), who was her cousin, Dr. Arthur Haddad. Well, I found out he was married to Laura Zacherle, John Zacherle’s sister! Yes, the Cool Ghoul himself! Next time Dr. Haddad made a house call he brought me a Zacherley Fan Club Kit, which included the passport to Transylvania, an item I’ve retained my whole life (so far). From that point on I was a monster addict, buying Aurora model kits, Famous Monsters, and Spook Stories trading cards.

Another big influence, during my teen years, was Blackie Seymour. A lot of people didn’t like Blackie and a lot did. Nevertheless, the man was nice to me. He taught me the movie poster business, not to mention all about Universal Studios. No one knew more about Universal than Blackie. He passed away last year.

Tell us about your favorite horror movies and stars and why you like them.

Okay, here is the hard question I’ve been asked a million times. Also, it’s one I can’t answer. But I will say this. Bela Lugosi is my all time favorite. I especially like any films Lugosi did with Karloff. They played off each other very well. It seemed so natural. I love The Black Cat, The Raven, and The Invisible Ray. Murders in the Rue Morgue is another Lugosi landmark. I like Dracula, but I think the Spanish version of the same era is a better film technically and certainly atmospherically. But Carlos Villarias is no Bela Lugosi, even if Lupita Tovar states they were very much alike in their portrayal of Dracula. She is wrong. Villarias couldn’t carry Lugosi’s cape!

I love The Wolf Man, King Kong, The Man Who Laughs, Things to Come, The Mysterious Island (1928), Dr. Jekyll and Mr. Hyde (1932), and The Werewolf of London. One Karloff film that really stands out is The Body Snatchers (1945). Most people would say Frankenstein was his greatest role. I would beg to differ. And that’s all I have to say about it. LOL! 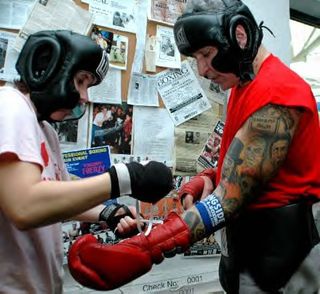 Aside from being a monster kid, you are also a boxer. Tell us about that.

Next to collecting monster stuff, boxing is my other passion. My father was a top ranked boxer back in the 1940s and 1950s, Johnny Potenti. He was such a devastating puncher that he was ducked by many champions of the era. The only champion that ever gave him a shot was the legendary Beau Jack. They fought in 1950 at Boston Garden, both well past their primes and Beau Jack squeaked out a split decision; while some in attendance said my father won.Beau Jack said in Ring magazine that Potenti had the best left jab/hook he had ever faced.

I followed in my father’s footsteps, getting into the ring at 10 years old. I had a pretty good amateur career in the “no head guard era,” and had my last bout at 28. But I never turned pro. I was, however, a professional sparring partner for the rest of my life. I just stopped boxing at 56 on doctor’s orders. I can’t even go into a gym now because I know I will get in the ring with men much younger than myself and bang it out. Boxing is like a drug in my veins. If I go into a gym it won’t be long before I put on the gear. So to be fair to my girlfriend and my family I have stopped, but it appears the damage is already done.

What's the one question you would love to be asked and what's your answer?

Question:What do I love about my life now as opposed to my past?

Answer: As I’ve aged I have lost all my anger. I was what I called a “hater.” I hated everything and everybody. I don’t know what it was. Even when I was boxing I wanted to get hit and hit. I wanted to kill my opponents, not defeat them. I took a lot of beatings I didn’t have to take. I guess I had a lot of problems I didn’t know about. Every relationship I had with girlfriends went bad. I fought with the police, and every form of authority out there. I drank a lot and was always saying “I’m sorry” to people. I think I hated myself more than anyone.

Now at 57, I have the best girlfriend any man could ever hope for, two great kids from my only marriage (when I was 17), and 7 grandchildren; also two dogs (my best friends), and one cat that I took off the street.

And finally, piece of mind: all the hatred is gone, and when I’m by myself I find ME in good company.

Posted at 07:58 AM in Magazine Morgue | Permalink