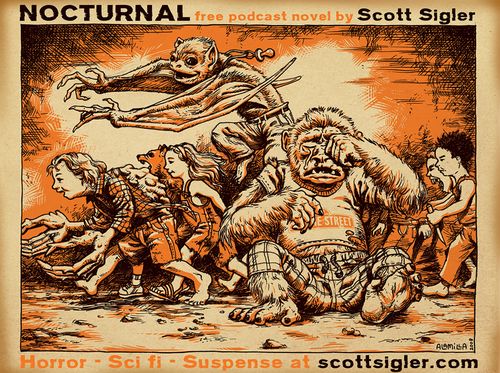 Bryan Clauser and Pookie Chang, two San Franciso Homicide Detectives, step into it badly when a department conspiracy turns into a monstrous nigthmare for them and the rest of the city. The monstrous part comes from a cult of monsters. A big cult of them, living underground and coming out only at night. Their prey is the homeless, the vagrants, and the unnoticed. Keeping them at bay is the Saviour, an arrow-shooting, cloaked avenger with unusual abilities and weapons. When Bryan and Pookie muck up the Saviour's aim with their good intentions, the monsters, who have been around for a century or so and just itching to hunt freely and without fear, quickly grab the opportunity in this escalating horror thriller by Scott Sigler. Combining police procedural with mind-numbing genetics  gyrations to make it all plausible between the covers, Nocturnal's 500 plus pages accelerate faster and faster until the blow-out payoff grudge match.

Along the way there's character growth, some stunting, and enough lively banter between Bryan and Pookie to define their natures so much you care what happens to them. Pookie dreams of bringing his cop opus, Blue Balls, to television; Bryan can't quite get his hands around the concept, or his ex-girlfriend Robin, either, as she suddenly finds herself running the City Morgue and soon involved in a knee-deep police coverup. Pookie is overweight and wears suits a size too small. He also drives like he owns the road. Bryan's the one with the deadly aim, cool exterior, and odd history that churns up disquieting things from a dark sediment he'd rather have left alone.

If you've read Clive Barker's Cabal or saw that novel's movie version, Nightbreed, you will have a slight familiarity with Sigler's bizarre creatures. If you've seen Slither, there's one particularly unpleasant scene early in that movie you will vividly recall when you read about Mother and how she gives birth to all those nasty monstrosities with cute names. The monsters' underground home reminded me of the Goonies (ancient ships figure in both), but I'll leave it up to you to see if it does the same.

I bounced between very good and excellent rating this novel; I felt a few less pages here and there would have moved the action faster for me, especially in Book 2: Monsters, the part of the story where everything starts going to hell more quickly than in Book 1: People. And that's only because I kept fighting the urge to skip past paragraphs as I became increasingly ansy to find out what would happen next.

The writing style is more movie-ish than literary--cheeky dip dialog, straightforward, visually concise action descriptions, and people with just enough needs, foibles, and dirty nails to make them interesting in a nutshell--so the pages turn quickly as plotlines converge. Sigler's habit of sizing chapters to measure the pace even more may leave you as breathless as Bryan and Pookie when push comes to shove.

One important note for zombie and romantic blood-sucker aficionados: although these monsters enjoy chewing on humans, there are no zombies among them. Or romantic vampires. The only things Nocturnal's monsters love to do is hunt and kill.

A courtesy copy of Nocturnal was provided for this review.

Sounds like you really enjoyed the read, and thanks for posting such a great review!