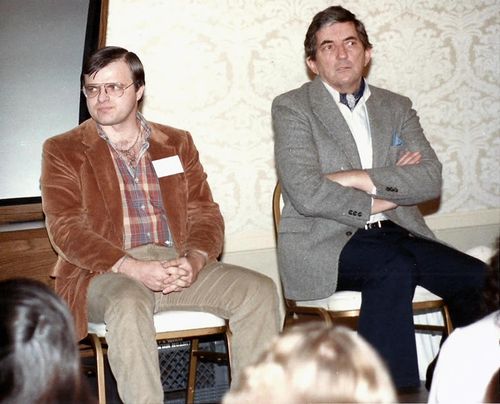 1984: A young(er) Professor Kinema chillin'
with Jonathan Frid at a Dark Shadows Convention

It was something unprecedented for afternoon programming. In fact, it was unprecedented for television programming for its time. Dark Shadows first aired on June 26, 1966 on the ABC network. Inspired by a dream, Dan Curtis created what would enter TV history as the first Gothic Daytime Serial, or as some would refer to it, soap opera. Even though it originally did not contain any supernatural elements, about 6 months into its run ghosts were introduced into the storyline. After another six months the ratings were sagging. At this point it was felt that yet a new and etremely unique element was to be added: a vampire.

Around show number 210 Barnabas Collins was introduced. Series creator Dan Curtis took his daughter's advice to "make the show scarier." At first, only Barnabas's hand was seen at the end of one episode. The character was a 175 year old vampire mistakenly resurrected and unearthed. As he was primarily concieved his character was to cause some mayhem, then be on the recieving end of a stake. However, viewers took to him totally, so the stake element was dropped. Due to the writing talent of the show, and the gifted insight of the actor playing the part, the entity of the Vampire was redifined. This metamorphosis reflected the times in which it was all happening. Such reinvention occurs regularly.

Although I wasn't entirely a fan of the series, I was definitely aware of its popularity. Friends who regularly followed it would state that they had to 'get home to watch Barnabas on TV after school.' On the magazine racks in local stationary stores Dark Shadows comics were turning up with the face of Barnabas adorning the covers. A minor cultural phenonema was happening.

I first saw Jonathan Frid 'in the flesh' during the summer of 1970. Friends and I decided to make the jaunt to the uncharted wastes of New Jersey. Our objective was to spend the day at the then still existing Palisades Park. On that particular day a beauty contest was occuring. The theme was 'Miss Vampire.' The contestants were dressed in various Goth-ish costumes. While being interviewed a few, getting into the spirit of the proceedings, added to their images by answering in bizarre, Germanic accents. When it came time for judging, the host introduced "...the one and only, Barnabas." Jonathan Frid walked out onto the platform and made a comic gesture, shielding his eyes from the vampire-damaging rays of the sun. He was not in costume but rather conservatively dressed in a suit. It was all in ghoulish fun.

In 1984 I was asked to be an 11th hour replacement for author Leonard Wolf at a Dark Shadows convention at the Gateway Hilton (again, New Jersey). The recommendation came from a friend of mine, Dr. Stephan Kaplan. Kaplan was a self proclaimed 'Vampirologist' who made appearances at such conventions relating stories of his investigations (and alleged deadly encounters) with 'real life' vampires. This was the second official Dark Shadows convention. Wolf, of the Count Dracula Society, was to talk about the Vampire in Literature. My presentation was, roughly, A Brief History of the Cinema Vampire. At the conclusion of our presentations, Jonathan Frid was brought out. We all sat down and fielded questions from the audience.

Since the room was jammed with hardcore Dark Shadows fans, naturally the focus of attention was turned to Barnabas himself. He would at times instruct the fans to address Dr. Kaplan and myself with other questions relating to what we were talking about earlier. The fans were respectful and did toss comments and questions our way, but after all...this was a Dark Shadows convention. The main fact Jonathan Frid was emphasizing was, "I was just an actor who was playing a part in a TV daytime series." Like many bonified media cult figures, he was truly baffled with his cult status.

I have a fond memory of that Dark Shadows convention, the organizers, the devoted body of fans who were there and, especially, Jonathan Frid himself. He was friendly and personable. An accout of this convention morphed into a chapter of a book titled True Tales of the Unknown, the Uninvited (1989, Bantan Books). In the chapter titled (what else?) Dark Shadows, Kaplan related the events of the day, our presentations to the fans, our involvement with Jonathan Frid, and how it all led him into an involvement with a real, bonafide vampire.

According to the obits, Jonathan Frid's career continued and flourished. Occasionally, he would be involved with other fantastic projects. He starred opposite Shelley Winters in the 1973 TV movie The Devil’s Daughter; the next year he played a horror writer in Seizure, Oliver Stone’s first feature. Returning to the stage, he played Jonathan Brewster — a role originated by Boris Karloff — in a 1986 Broadway revival of the macabre comedy Arsenic and Old Lace.

He makes a cameo appearance in Tim Burton's soon to be released Dark Shadows movie (along with several other DS alumni). Trained for the classical theater and adept at doing Shakespeare (for which he won awards) it may be possible that something ethereal and mildly diabolical was guiding his destiny.

After all, he left this realm on Friday the 13th.