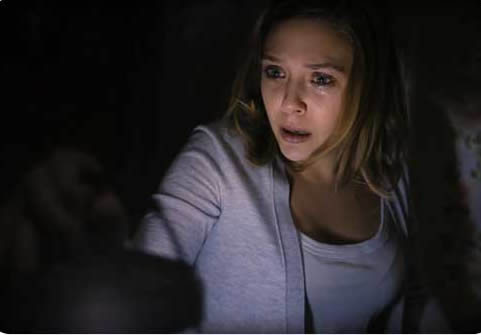 Zombos Says: Good (but only just)

Chris Kentis and Laura Lau Americanize Gustavo Hernandez's La Casa Muda into Silent House, adding Elizabeth Olsen's strident histrionics in the form of Sarah, a young girl trapped in her lakeside childhood home with her unconscious father (Adam Trese), lit by a few hurricane lamps and flourescent lanterns throwing lots of shadows (mostly across her bosom), and being stalked by an intruder or intruders, unknown or known, making her scream a lot as she looks for a way out upstairs and downstairs.

No, it isn't quite like the French movie Them, though at times I wished it followed that film's straightforward simplicity of unremitting terrorization. And no, it also isn't at all like 2009's The Uninvited with Emily Browning, except perhaps for a familiar psychological scrambling involving mirror mirror on the wall duality. This duality provides answers at the end of Silent House as well as the twist ending that's not so twisted because of the neon-sign-obvious inclinations of Sarah's uncle (Eric Sheffer Stevens), and the polaroid snapshots, popping up in unlikely places, he and her father are unnerved by.

The anachronistic use of a polaroid camera to take photographs of mold, and to provide intermittent flashbulb light for Sarah as she becomes more terrorized by what's happening around her in the dark, distracts more than it sharpens the suspense. The camera exists for the sole purpose of implying a relationship between those unnerving photographs and their possible photographer, therefore diminishing uncertainty, too early, as to what is really happening to Sarah and her perceptions of what is happening; a cinematic contrivance so threadbare it's obvious, even if we see mysterious people in the house, and Sarah talking to a strange childhood friend she doesn't remember, although they played dress-up together.

The audience promotion gimmick of filming Sarah in one long take (more or less) as the camera shakily follows her, looks at her, sees what see sees, and runs from the house with her, doesn't bring anything to this production that a less shaky view would have. Lighting throughout the house is impressively sinister, but the rooms and hallways get slightly brighter toward the climactic ending, either a studiously planned subtlety showing Sarah's growing realization of the truth, or the camera crew got tired of tripping over their feet in the dark house.

What makes this movie good is Olsen's intensely executed performance (or cleavage, I've not fully decided yet), and its (the movie, not her cleavage) ability to hold our fear within the shuttered house, at least for a short while. And then there's the "lift-gate open" scene outside the house. It sparkles with terror more than any other moment.

Now there's a gimmick I would like to see more of: more moments of sparkling terror, without unnecessary pychological twists to tarnish them.

I agree with your assessment. I went to take my teen daughter who wanted to see it, even after I told her about the bad reviews. In my view this is more of a suspense or thriller than horror. And I found the attempt at one-shot subjective perspective more irritating than helpful, even though I recognize it is supposed to support the "revelation" at the end that Sarah is working through her own psychological issues rather than encountering a supernatural other. While some laud this as a breakthrough in a tired American horror cycle, I'll look for hope elsewhere.